For the 24 hours to 23:00 GMT, the GBP declined 0.74% against the USD and closed at 1.2990, after Britain’s economy grew at its weakest annual pace in more than seven years in November, further raising the prospects of interest rate cuts.

On the data front, Britain’s gross domestic product (GDP) unexpectedly declined 0.3% on a monthly basis in November, defying market expectations for a steady reading. In the prior month, GDP had recorded a revised rise of 0.1% in the previous month. Further, the industrial production fell 1.6% on an annual basis in November, more than market anticipations for a drop of 1.4%. Industrial production had recorded a revised decline of 0.6% in the previous month. Moreover, the nation’s manufacturing production dropped 2.0% on an annual basis in November, more than market expectations for a fall of 1.6%. In the preceding month, manufacturing production had registered a revised drop of 0.3%. On the contrary, total trade surplus stood at £4.0 billion in November, compared to a revised trade deficit of £1.3 billion in the previous month. Meanwhile, the NIESR GDP estimate is expected to post zero growth in the fourth quarter of 2019.

In the Asian session, at GMT0400, the pair is trading at 1.2991, with the GBP trading a tad higher against the USD from yesterday’s close. 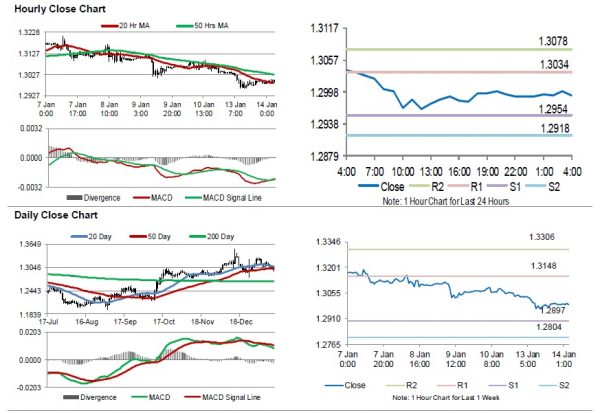 British Pound Trading On A Negative Footing This Morning

Nasdaq And Gold Take To The Skies, Dollar Tanks