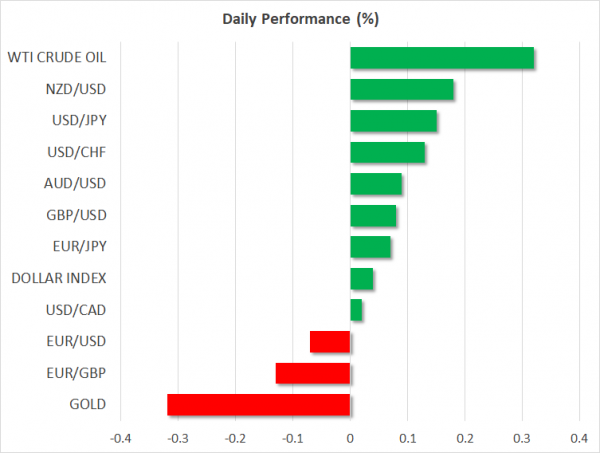 Euro drops as Lagarde doesn’t hit back at negative rates

As expected, the European Central Bank (ECB) made no changes to its stimulus program yesterday, nor did President Lagarde say anything particularly interesting about future policy. The euro initially squeezed higher, after she highlighted that while the risks surrounding growth remain tilted to the downside, they have become “somewhat less pronounced” lately given a mild uptick in inflation and the US-China trade truce.

Alas, it wasn’t meant to last, with the euro reversing lower to end the session as the worst-performing major currency. The catalyst wasn’t entirely clear, but euro/dollar broke lower after Lagarde was asked about negative rates – specifically, whether the ECB could follow in the Riksbank’s footsteps and end its experiment with sub-zero rates. She gave no indication her central bank might consider that, which was likely a touch more dovish than investors expected.

Meanwhile, the preliminary PMIs for January out of France and Germany have just been released and were a mixed bag. The French numbers were softer than expected on the whole, but the German figures rose by much more than projected, leaving the euro little changed overall.

On the margin, one could argue that the substantial recovery in Germany outshines the signs of fatigue in France, as the former is a much bigger economy and the latter was never in much trouble to begin with. As such, the euro’s inability to gain today on slightly better news is alarming, and may be a harbinger of things to come.

In the broader market, the corona virus remained front and center, with a barrage of reports about increasing cases in new countries weighing on risk sentiment, sending global stocks lower and the defensive yen higher. Yet, US stock indices erased their losses and the benchmark S&P 500 managed to close in the green, taking heart from the fact that the World Health Organization stopped short of declaring the virus an international emergency.

The FX market was having none of that though, with the yen holding onto most of its earlier gains, even against a stronger dollar. This divergence is striking, and has become a much more frequent phenomenon in recent months, with the stock and currency markets sometimes moving out of step.

The answer as to why probably lies with liquidity. With the Fed resuming its balance sheet expansion recently, joining the ranks of the ECB and BoJ, financial markets are flush with liquidity once again and that is ultimately making investors push equities higher with every excuse. The same dynamic doesn’t really apply to the FX market, which is more of a zero-sum game. Hence, the correlation between dollar/yen and stock indices is already on the decline, and might fall further going forward in an environment of excessive liquidity injections.

In the UK, the preliminary PMIs for January rose by much more than expected, which argues for the Bank of England (BoE) to keep its rate powder dry when it meets next week. The post-election rebound that everyone was hoping for materialized, giving policymakers some breathing room to wait and see how things play out.

Strangely enough though, the pound was unable to sustain its PMI-related gains, with Cable trading lower in the following minutes. Still, the numbers seem good enough to keep the BoE sidelined for now, and if rate-cut expectations are further priced out heading into next week’s meeting, sterling could post some gains.

In Canada, retail sales for November are due out, and given how much emphasis the local central bank placed on weak consumer readings at its meeting this week, these will be crucial in setting expectations around whether rates will be cut soon. 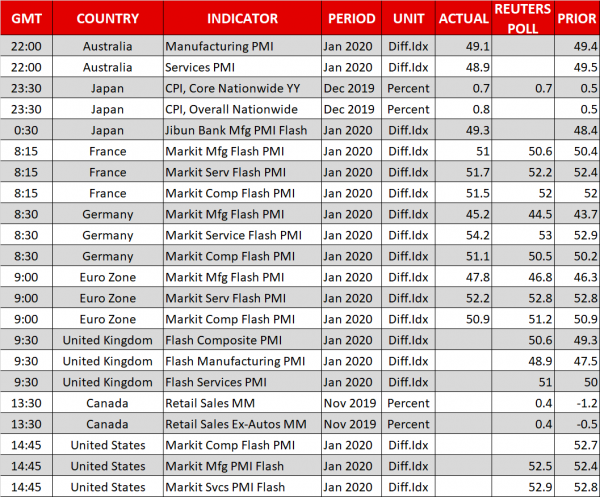