JPY strengthened, while the Aussie weakened against the USD on Friday and during today’s Asian session, as worries about the spreading of the coronavirus increased further. China announced that it will extent the New Year holiday to February 2nd in an effort to prevent and control the new coronavirus, as the new virus has claimed 80 lives and over 2700 persons have been infected in the Chinese mainland, according to media. Also, Chinese Premier Li Keqiang is visiting Wuhan, in an effort to underscore the seriousness of the Chinese government in fighting the disease. Analysts tend to note that wide uncertainty about how much further the virus could spread seems to move the currency market as well as oil and stocks. As per our previous analysis, which was confirmed until now, we expect that, should uncertainty increase further, the Aussie could continue to weaken, while safe-havens such as Yen could strengthen. USD/JPY dropped and opened with a negative gap on today’s Asian session, breaking temporarily the 109.00 (S1) support line, yet corrected higher later on. Technically we maintain a bearish outlook for the pair as the selling momentum seems strong. Please note though that the RSI indicator in the 4 hour chart is below the reading of 30 and may imply an overcrowded short position for the pair. Should the pair come under the selling interest of the market, we could see it breaking the 109.00 (S1) support line aiming for the 108.35 (S2) support level. On the flip side should the pair’s long positions be favoured by the market, we could see it breaking the 109.70 (R1) resistance line aiming for the 110.35 (R2) resistance hurdle.

The pound continued to slip against the USD on Friday as despite very positive financial releases, the market seems to continue to price in a possible rate cut as GBP OIS imply a probability for such a scenario of 51.54% currently. The readings of the preliminary January PMIs for the UK were better than expected, especially the one of the key services sector, for the UK economy. The recent PMI readings in combination with the tight UK labour market seem to suggest that the UK economy may have started to pick up pace, which could ultimately strengthen the pound and prevent an imminent rate cut by the BoE. Yet for the time being, should the market continue to price in a rate cut by the BoE we could see the pound remaining under pressure. GBP/USD dropped on Friday, aiming the 1.3015 (S1) support line, after testing the 1.3170 (R1) resistance line. We maintain a bearish outlook for the pair as a downward trendline since Friday’s highs is forming. Should the bears maintain control over the pair’s direction we could see it breaking the 1.3015 (S1) support line and aiming for the 1.2820 (S1) support level. Should the bulls take over, we could see the pair aiming if not breaking the 1.3170 (R1) resistance line.

Today, we get from Germany the Ifo business climate for January and the US new home sales for December. 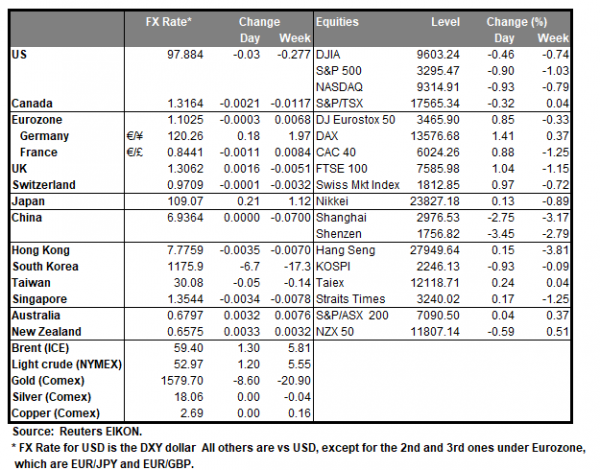