The rapid spread of the new coronavirus has been alarming with the number of confirmed cases in China alone already larger than the total global confirmed cases of SARS, the previous global outbreak, in 2003. On January 30, the World Health Organization offi-cially labelled the coronavirus an international public health emergency. The economic cost of the outbreak will pale in comparison to the human cost with almost 10,000 cases confirmed in China alone to-date and more than 200 people having died from the illness. But there will also be near-term consequences for economic activity. So far, the spread of the disease to other countries has been relatively limited. But the outbreak is disrupting China’s economy, and those disruptions will have, albeit temporary, spill-overs to other countries, including Canada.

A disruption to economic activity in China, even if temporary, will have greater implications for the global economy now than in the past. Today, China accounts for almost 20% of global GDP compared to about 9% at the time of the SARS outbreak. The implementa-tion of travel restrictions and extension of closures following the New Year holiday will have an impact on economic growth numbers in China in the first quarter. Flight cancellations at China’s busiest airports ramped up dramatically as the number of suspected and confirmed coronavirus cases rose. The service-sector more broadly will see significant disruptions and services are also a larger share of the Chinese economy than they were at the time of SARS. Researchers in China have pegged the potential GDP hit in Q1 in the country at a percentage point or more.

Concerns about fuel demand from China have pushed global oil prices low-er, to around $52/bbl on a WTI basis versus closer to $60/bbl ahead of the outbreak. While that drop is expected to be temporary, it will presumably reduce revenue for the Canadian oil & gas sector in the near term. And the longer the disruptions to economic activity in China last, the greater the potential for temporary spill over into global supply chains.

Bilateral Canada-China travel has also increased dramatically since the SARS outbreak. By our count, China accounted for almost 7% of non-resident arrivals by air into Canada in 2018, up 7-fold from about 1% in 2003. Air Canada has already announced the suspension of all flights to Beijing and Shanghai until at least the beginning of March – joining a grow-ing list of airlines globally cutting flights to and from China. 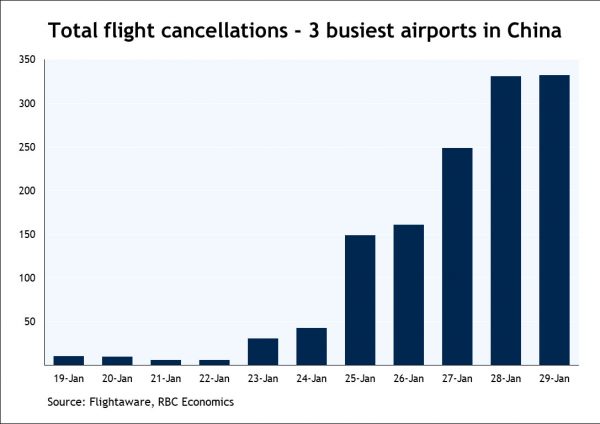 Air transportation accounts for just 0.5% of the Canadian economy. The Bank of Canada estimated in 2003 that SARS-related travel disruptions – with some spill-overs to other industries – subtracted about half a percent from Q2-2003 GDP growth (the first SARS case arrived in Canada in Febru-ary 2003). But most of the drop in travel to Canada at the time came from reduced car traffic from the US, not just reduced air traffic from Asia. 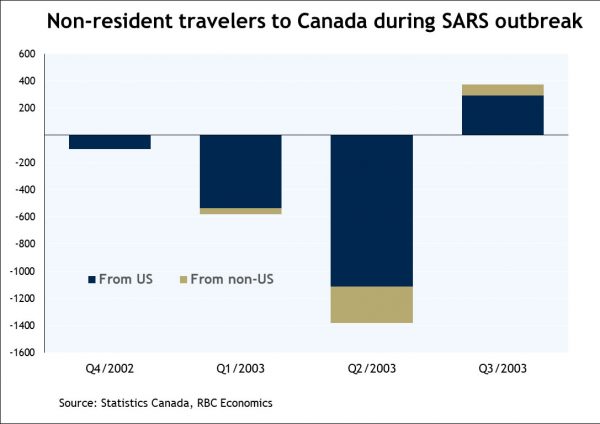 And that was because the Canadian experience with SARS was worse than other countries. It took months after the initial outbreak in late 2002 for the disease to be identified and even longer for a diagnostic test to be developed. By that time the illness had already spread to Canada. The Toronto area was the only region outside of Asia – adding to Taiwan, Hong Kong, and parts of mainland China – to be singled out with a SARS-related travel advisory issued by the World Health Organization. Unsur-prisingly, all of those regions saw a sharper drop in traveler arrivals in 2003 than other countries, with Canada leading the pack downward. At this point, the economic impact of the coronavirus in Canada looks more likely to be limited to a pullback in international air travel, along with potentially some disruption to industrial supply chains from the disrup-tion to production in China. And that should leave a limited and tempo-rary impact on GDP growth of 2 or 3 tenths of a percent (annualized) in Q1.

And global preparedness appears to have improved since 2003

Indeed, a key difference between the current coronavirus versus the 2003 SARS outbreak seems to be better preparedness for dan-gerous novel flus globally. This latest virus appears to have been identified relatively quickly, along with a diagnostic test. That has allowed authorities to step in quickly to take precautions to help limit the spread of the disease faster than was the case with SARS.

One area where history will likely at least rhyme is that – similar to the period in 2003 following the SARS outbreak – we think the Bank of Canada is likely to cut interest rates. But, as in 2003, the cut probably won’t be in response to the spread of the illness itself. In 2003, uncertainty about the economic impact of the Iraq war (which also started early that year) and a case of mad cow disease that prompted the US to ban Canadian beef imports meant the central bank probably would have cut rates with or without the SARS virus. Today, the negative economic fallout from the coronavirus in Canada will just add to an already soft economic growth backdrop that we think was already putting the BoC in position to cut the policy rate by mid-year.