Nonfarm Payrolls: Could First Report of 2020 Send the Dollar Higher?

The most followed US economic release, the Non-farm payroll report, is coming out this Friday at 13:30 GMT and the data will be closely watched as this will be the first print of the new year but also of the new decade. Despite the coronavirus scare, analysts believe that the US labor market kicked off the year on the right foot. The reaction in the dollar, however, will depend on whether the numbers will be able to smoothen markets’ dovish views on the Fed’s interest rate path.

Despite the ups and downs in the trade world, the US labor market not only managed to complete 2019 in good shape but also to record its best decade performance as the unemployment rate dropped to 50-year lows and real wage growth strongly rebounded.

During the festive December month, nonfarm payrolls totaled 145k, which was lower than the whooping 256k registered in the prior month, while the average hourly earnings also inched down to 2.9% y/y, although the unemployment rate remained steady at 3.5%.

The data, however, were not worrisome as employment growth appeared once again comfortably above the 100k threshold and are not expected to bring concerns this time either as markets anticipate the creation of 160k job positions in January. Wage growth is also forecast to edge up to 3.0% y/y in the first month of the year from 2.9%, while the unemployment rate is expected to hold at 3.5% for the fourth consecutive month. 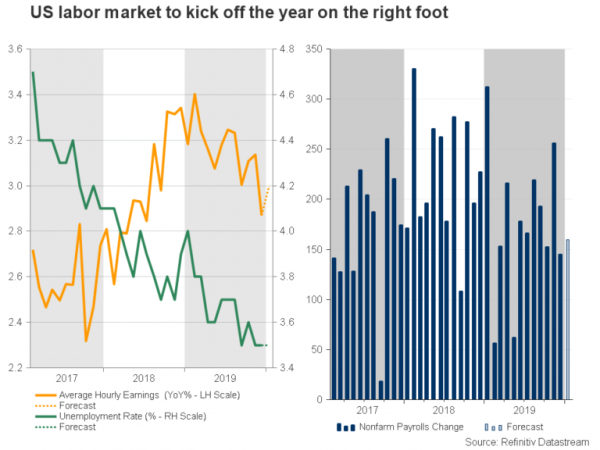 In truth, some improvement in the NFP print should not be very surprising as the January ISM manufacturing survey, whose improvement reflected ebbing trade tensions due to the US-China phase one agreement, has already indicated a rise in factory employment this week. A stronger wage growth, however, is always good news as policymakers are eagerly waiting for inflation to heat up towards the Fed’s 2.0% target. The central bank’s favorite inflation index was persistently on the downside last year, falling from 2.0% to 1.5% y/y before inching up to 1.6% in December. For the full year of 2019, real consumer spending was also softer, printing an increase of 4.0% which was the smallest in three years after rising by 5.8% in 2018. Recall that the Fed described the pace of rising in household spending as “moderate” in the latest monetary statement, revised from “strong” previously and therefore markets could turn sensitive on measures that have an impact on consumption. 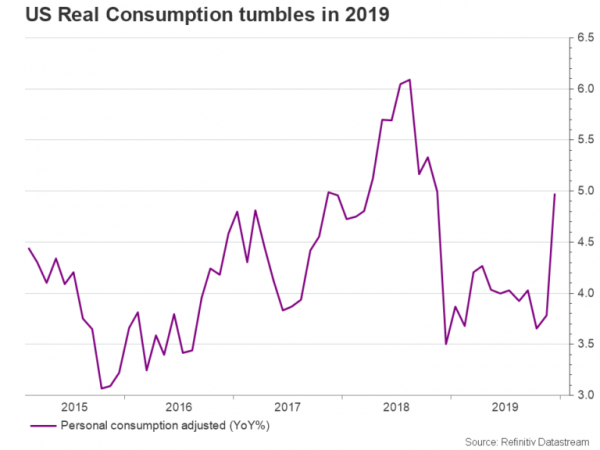 Should wages fail to move up, it would also be a disappointing signal that the Fed’s three 25bps rate cuts in 2019 have not worked through the economy yet and inflation may take extra time to reach the 2.0% goal through higher consumer spending. While it is still too soon to tell, such an event would consequently validate markets’ expectations of a rate cut by the end of the year even though the Fed said it would hold monetary policy unchanged in 2020 and the dot plot showed a rate hike in early 2021.

Given this, the dollar could drift lower to meet nearby support at 109.20 against the safe-haven Japanese yen which is currently well-supported by the global coronavirus panic that is likely to have a negative impact on Chinese growth, with the 108.40 support area also being in focus in case of a steeper decline.

Alternatively, while the NFP figures are not expected to change the Fed’s neutral stance, a positive surprise in wages could somewhat calm markets’ fears of a slower GDP growth in the first quarter for now that is threatened by Boeing’s production suspension of its troubled 737 jetliner last month and the coronavirus health problem. Consequently, the minimal odds for a rate cut may also turn smaller, giving USDJPY the opportunity to run above the 109.70 resistance region and towards the 110.30 peak .