Canada will publish its first inflation figures for the new year on Wednesday at 13:30 GMT before releasing retail sales data for the month of December on Friday at the same time. Given its direct impact on monetary policy and the fact that December’s numbers are considered outdated, the inflation report, could be a more important market mover among data releases for the loonie this week, which has just managed to stabilize from the strong sell-off since the start of the year.

The Bank of Canada is among the few central banks that continues to keep the door open for a future 25 bps rate cut open even though it managed to survive the global trade uncertainty without easing monetary policy in 2019. With oil prices falling and exports easing on the back of a slowing global growth, a softer expansion in the commodity-dependent economy was inevitable during the year.

Nevertheless, the central bank decided to stand pat on interest rates as inflation remained around the midpoint of its 1-3% target, the unemployment rate held near 50-year lows and wage growth continued to firm faster than the inflation rate in January, reflecting healthy domestic conditions for consumers, which could turn more friendly thanks to the recent federal income tax cut. Additionally, a more important reason to avoid a more accommodative monetary policy was Canada’s mounting household debt-to-GDP ratio that saw another pickup in the third quarter, remaining the world’s largest percentage and a key risk to the economy. 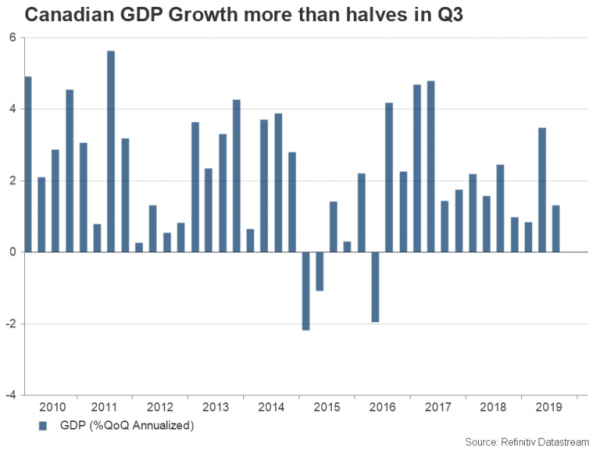 The above, however, were not enough to exclude the scenario of a rate cut, with BoC chief Stephen Poloz last week highlighting that rates may have had to be cut if it wasn’t for the government’s fiscal stimulus. Moreover, doubts remain about the future outlook as the US-China trade war has not fully faded and could resume if the sides fail to secure a deal in the second phase of negotiations this year. Meanwhile, concerns are also rising about the potential global economic impact of the new deadly coronavirus that has restricted business activities and pressured oil prices.

Since Canada cannot control these external risks that weigh on its business indicators, the central bank relies on consumers to keep the economy balanced. Hence, any indicator that reflects adjustments in household spending will be closely watched in the near-term to determine whether there is a need for monetary stimulus.

Inflation to hold around the target

This week, the headline CPI inflation may not urge any change in interest rates once again as the index is forecast to inch up to 2.3% y/y in January from 2.2% previously, holding above the 2.0% midpoint target for another month. Meanwhile on Friday, growth in retail sales – a proxy for consumption – is expected to edge down to 0.1% m/m in December from 0.9% but improve to 0.4% m/m from 0.2% when excluding vehicles sales, staying within normal levels overall. 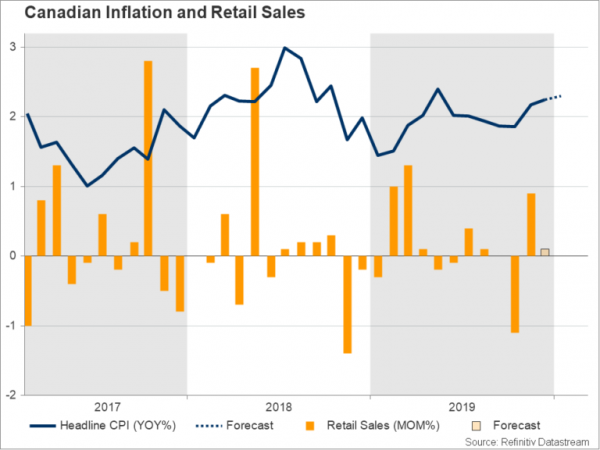 In terms of market reaction, retail sales are out of date and could be shrugged off as traders are more interested about this year’s data, something that makes inflation readings more important to look at. Yet, for the loonie, to extend this month’s rebound, the numbers should beat expectations, reducing the the near 75% probability of a 25bps rate cut markets are currently pricing in for the year end.

Otherwise, a weaker print especially in core measures, which better reflect the inflation trend, could ease momentum in the market but not significantly as traders would wisely wait and see whether there will be any further deterioration in global economic conditions and therefore in the Canadian GDP growth probably stemming from the coronavirus.

Looking at USDCAD, which is pushing efforts to erase January’s rally, an upside move in the loonie could enhance the downside move for the pair, bringing support around 1.3225 under the spotlight. Lower, the price could retest the 1.3200-1.3185 restrictive region before heading to 1.3150.

Alternatively, disappointing CPI numbers could re-challenge nearby resistance around 1.3270, where the 50-period simple moving average (SMA) is currently standing. Beyond that obstacle, the way would open towards the 1.3300 round mark and then up to the 1.3326 key barrier.