Gold prices jumped during today’s Asian session marking the highest peak since February 2013 and reaching 1680 USD. As the number of confirmed coronavirus cases spikes in countries outside of China, worries tend to increase about a possible economic slowdown, sending the markets to safe havens such as gold. It seems that beyond the increase of cases in countries such as South Korea, Italy and Iran, also WHO’s remark about a growing number of cases without clear linking to China, increased market worries even further. It should be noted that speculative long positions tend to magnify the effect driving gold’s prices even higher. Analysts are also mentioning that apart from the current market uncertainty, low interest rates are another factor contributing to the rise of gold’s prices. We expect gold prices to continue to strengthen as long as the headlines continue to highlight the spreading of the disease and increase market worries. XAU/USD jumped during today’s Asian session, aiming for the 1682 (R2) resistance level and marking anew seven year high, yet retreated later on, to hover below the 1667 (R1) resistance line. We tend to maintain a bullish outlook for the pair, especially after the steepening of the upward slope of the precious metal’s direction. Should the buyers insist on their bid, we could see gold’s prices once again breaking the 1667 (R1) resistance line and aim for the 1682 (R2) resistance level. On the flip side, should sellers take over, we could see gold’s prices breaking the 1662 (S1) support line and aim for the 1635 (S2) support level.

The pound strengthened against the USD on Friday as the preliminary PMIs for February provided some comfort for pound traders. The Services PMI dropped yet near expected levels, while the big surprise came from the manufacturing sector, which showed increased economic activity for the month February, with the PMI reading breaking clearly above 50.0. Analysts tend to note that the PMI data are reassuring for the UK as it heads into the negotiations with the EU about their post Brexit relationship. We expect that worries for UK’s economy may ease somewhat, allowing the pound to strengthen yet the oncoming negotiations with the EU, may reverse the positive climate for the pound. Cable rose and temporarily broke the 1.2945 (R1) resistance line yet corrected below it during today’s Asian session. We maintain a bearish outlook for the pair, as long as its prices remain within the downward channel boundaries guiding it. Should the pair remain under the selling interest of the market, we could see it aiming if not breaking the 1.2860 (S1) support line. Should the pair’s long positions be favoured by the market, we could see it breaking the 1.2945 (R1) resistance line and aim for the 1.3015 (R2) resistance level.

Today we get Germany’s Ifo Business climate and Canada’s manufacturing sales both for February. As for speakers, BoE’s Andy Haldane and Cleveland Fed President Mester speak. 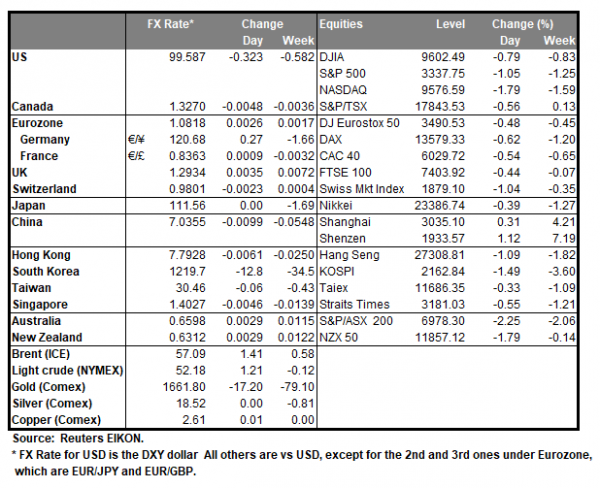