The greenback retreated yesterday against a number of its counterparts as the market seems to raise its expectations about a possible rate cut by the Fed. The Fed could be pressured into cutting interest rates in order to provide the necessary cushion for the possible hit on US economic growth from the spread of the new coronavirus. Currently Feds Funds Futures seem to imply a probability of 46.5% for a possible 25 basis rate cut as early as June, with the market implying also a probability of 19.3 for a deeper cut. It should be noted that Cleveland Fed President Mester in a recent question, described the risk as big, yet “at this point its difficult to assess the magnitude of economic effects”. At the same time, she also stated that she will be closely monitoring this new source of uncertainty. Also please bear in mind that on Friday the PMI readings mostly disappointed the markets curbing their enthusiasm somewhat about the USD. Also please note that gold’s prices corrected lower after the 7 year high yesterday, yet more about that in our gold’s weekly outlook later today. We expect the USD to be data driven yet further statements by Fed officials could also be gaining on attention. EUR/USD corrected upwards yesterday breaking the 1.0830 (S1) resistance line, now turned to support. We tend to expect further bullish tendencies for the pair, as an upward trendline seems to be forming, yet today’s financial releases could change the pair’s direction. Should the bulls be in charge of the pair’s direction, we could see it breaking the 1.0885 (R1) resistance line aiming for the 1.0945 (R2) resistance level. Should the bears take over, we could see the pair breaking the 1.0830 (S1) support line and aim for the 1.0770 (S2) support level.

… while the Aussie seems to stabilise…

The Aussie seems to stabilize against the USD, at rather low levels after a steep drop in the past week. Analysts, seem to note that perhaps the slower rate of new coronavirus cases reported by Korea and China, may be behind the AUD finding its footing. Also, the weak USD as analyzed above may have contributed to the stabilization of the pair. Please note that we consider risks to be still present for a possible further weakening of the AUD, as the situation with the coronavirus remains highly fluid. At the same time please bear in mind that next week, RBA is to deliver an interest rate decision and is expected to remain on hold at the current stage, which could start creating headlines for the Aussie earlier. Should the media headlines ease market worries somewhat, we could see the AUD remaining rather stable or even finding some support. AUD/SUD maintained a rather sideways motion yesterday constantly playing with the 0.6615 (R1) resistance line. We maintain our bias for a sideways movement for the pair after the clear breaking on Friday, of the downward trendline incepted since the 19th of the month. Should the pair come under the selling interest of the market, we could see it breaking the 0.6575 (S1) support line and aim further south. On the flip side should the pair’s long positions be favoured by the market, we could see it breaking the 0.6615 (R1) resistance line and aim for the 0.6650 (R2) resistance level. 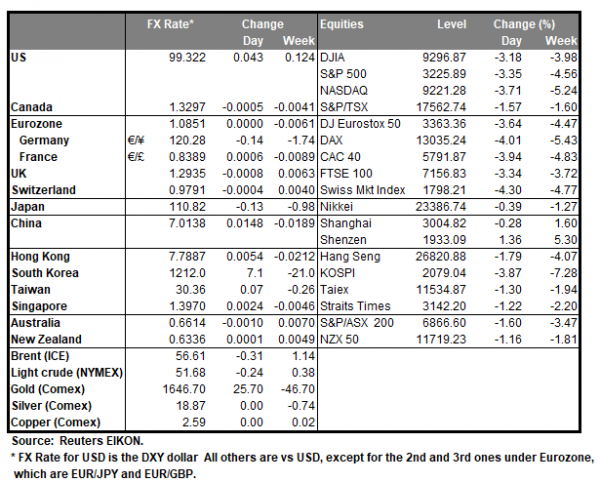