In stark contrast to the US, China printed a positive data set today, with growth, investment, production and retail sales all beating expectations.

GDP expanded at an annual rate of 6.9% in Q2, beating expectations of a reduction to 6.8% and maintaining the solid pace of Q1. This is the 2nd positive surprise from GDP this year, where many feared growth would soften. The government has switched from growth revival to growth preservation, although it would appear growth is doing just fine.

Since moving below 7% in Q3 2015, growth has ranged between 6.7 – 6.9%. The lack of volatility from the quarterly reads has also aroused suspicion over the accurate if the data as some question whether real growth is being dressed up. Still, global market can take a sign of relief for now that a hard landing is not on the horizon and may begin to consider the low has been seen at 6.7%.

Retail sales beat expectations to rise 11% YoY, up from 10.7% previous and above 10.6% forecast. At 11% YoY, retail sales has expanded at its fastest rate since Jan 2016 to show consumer confidence is on the rise.

PMI data suggests continued support for growth in the quarters ahead, although this also depends on which read you use. The government related NBS PMI’s tend to paint a healthier look for the economy, with both manufacturing and services continuing to expand.

Industrial production also beat expectations by expanding by 7.6%, its fastest pace since march and 2nd fastest since an 2015. If the NBS PIMs are correct then we could see industrial production pick up pace from here in the coming months and provide further support for growth.

USDCNH printed a bearish outside week to warn of pending weakness. As this follows on from a volatile, bearish engulfing candle two weeks ago and failed to recover 50% of its range, we can consider this to be a key swing high. Whilst prices have stabilised above support we are seeking to fade into the rally and move towards the 6.72 low. We have outlined a bearish channel yet the bearish engulfing candle from two weeks ago failed to test the upper trendline. Therefor we are also on guard to revise this channel, as current price action suggests its trajectory may become more bearish. When we assess US data and USD sentiment, we do see potential for this to roll over at some point. 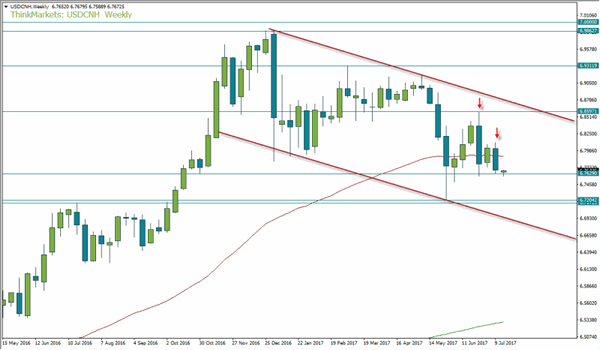 The two swing highs which form the bearish channel are taken from the bearish engulfing highs. As we trade below the monthly pivot yet have stabilised above support, we can consider fading into a retracement towards the monthly pivot. A break above the pivot or upper trendline invalids the bearish setup, yet whilst we remain beneath these levels then a run down to WS1 and WS2 are our targets. We can either use a break of last week’s low to assume a bearish continuation, or pre-empt
a bearish run and use a sell-limit order below the pivot to catch a mini rally. 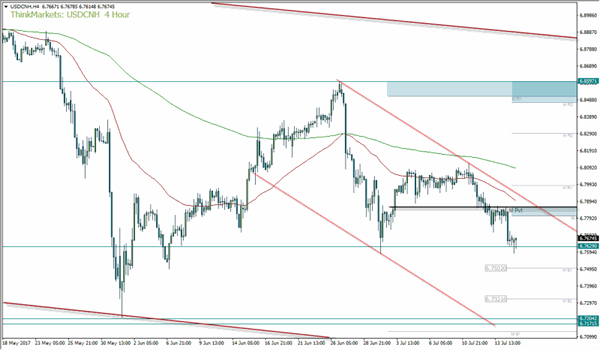