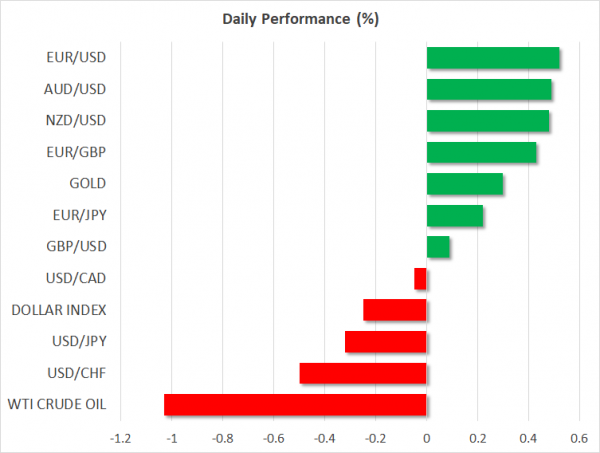 Worries about the coronavirus continue to plague markets, as every passing day makes it clearer that this crisis won’t blow over soon, and the disruptions initially on supply chains and then on demand could be the ‘black swan’ that ultimately tips the global economy into recession. The number of infections outside China continues to explode, particularly in Italy and South Korea, while populous countries like Brazil and Pakistan reported their first cases yesterday, igniting fears that the outbreak is spiraling out of control.

Stock markets in every region are a sea of red on Thursday, with Japan’s Nikkei 225 closing 2.1% lower, most European indices opening more than 2% down, and Wall Street futures pointing to a ~0.5% negative open. What’s striking is that we are witnessing a paradigm shift in equities, where ‘bad news is no longer good news’. Expectations for monetary stimulus by the major central banks continue to build, with three Fed rate cuts over the next year now fully priced in, yet that has failed to breathe life back into stocks.

Investors are probably right to be wary, as lower interest rates and all the QE in the world aren’t going to fix broken supply chains any sooner, or do much to lift demand if worse comes to worst. That said, lower US rates would have a significant impact on the dollar, and we are seeing the effects of that already with the reserve currency continuing its retreat today, pressured by narrowing rate differentials as the 10-year Treasury yield sinks to new all-time lows.

Little to suggest a turnaround ahead

Looking ahead, risk aversion might remain the dominant theme for a while longer. News flow isn’t going to get better anytime soon as the number of infections continues to surge, and it might be just a matter of time until several multinational corporations start lowering their earnings guidance, adding another dimension to the stock market’s troubles.

Meanwhile, February PMIs out of China – that will capture the extent of the damage – are due out over the weekend, and without trying to speculate how much they’ll collapse, who would want to keep high stock exposure heading into that? In other words, we could see more de-risking before the weekend, as investors insulate their portfolios from the risk of a sharp negative open on Monday.

This would imply a continuation of the moves we’ve seen in recent days, namely more pain for stocks and commodity currencies, and more love for safe havens like the yen, gold, and even the euro.

The euro is outperforming all its major rivals on Thursday, capitalizing on the dollar’s retreat and on the broader risk averse mood given its newfound status as a funding currency, which grants it haven-like characteristics.

Yesterday, Germany’s finance minister hinted that Europe’s largest economy could relax its fiscal rules a little, raising hopes for a spending package to boost growth. However, judging by the muted market reaction, investors didn’t really ‘buy it’, mainly because even key allies of Chancellor Merkel opposed it immediately.

Is this the end of the downtrend in euro/dollar then? Probably not. While the latest rebound could continue for now as risk aversion reigns supreme and markets price in more Fed rate cuts, there’s little to be optimistic about in Europe overall. The bloc is barely growing already, and Italy – the Eurozone’s third largest economy – might fall into a virus-induced recession soon. Meanwhile, policy room both monetary and fiscal is limited, so any powerful stimulus won’t be coming.

As for today, there’s a bunch of key data releases out of the US, but investors might view them as outdated since they reflect the pre-virus period. 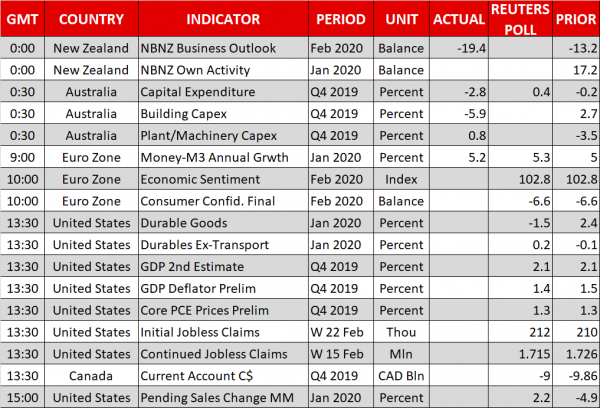