Annual inflation fell from 2.2% to 1.7% in Q2, missing forecasts of 1.9% and underscoring RBNZ’s expectations of variable CPI.

Whilst RBNZ have hopes for inflation to return to the 2% area (on average) over the medium term, we doubt inflation will pick up to reverse the trend of inflation which has been moving gradually lower since the beginning of the data set. This is a patten which keeps on cropping up on the developed world and one which central banks are yet to truly challenge.

With the Bank of Canada leading the way with a hawkish hike, there had been hopes that inflation would continue to recover in NZ and pile the pressure on RBNZ to tighten. Yet RBNZ had also warned that CPI is likely to be variable throughout the year, so today’s soft CPI is just a dose of reality. Also not helping the case for a hawkish RBNZ is the rebound of the TWI; Both RBA and RBNZ see higher exchange rates as a threat to trade, which puts them firmly in a different camp to their commodity peer Canada. 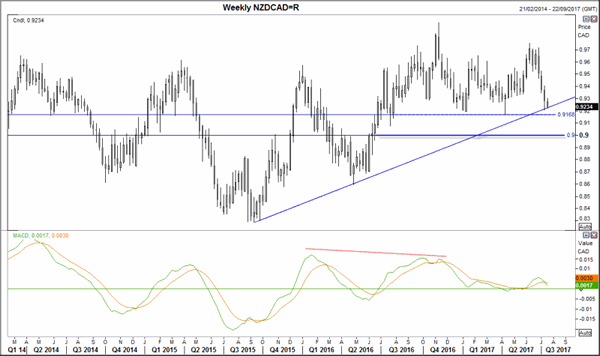 NZDCAD is testing key support from the September 2015 trendline, and we see a downside break as imminent. BoC could raise one more time this year to further narrow the positive carry NZD offers (currently 1%) which is seeing a repricing on bonds and adds further downside pressure to NZDCAD. All RBNZ have to do is remain neutral or begin jawboning and NZDCAD is likely to be a preferred short over the near-term. A break of the trendline may find initial support at the 0.9168 low but we could see this move to 0.90 over the coming weeks if data from Canada continues to outperform expectations. 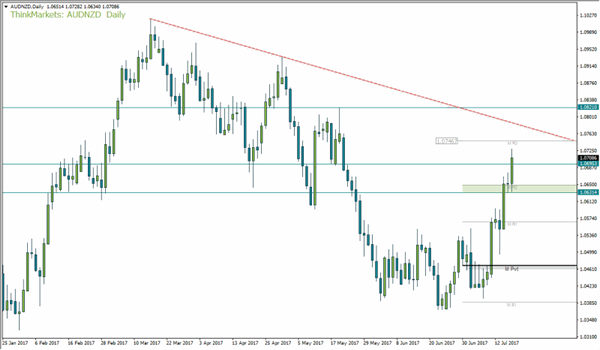 AUDNZD extended gains to an 8-week high although the RBA minutes and employment data on Thursday will be in focus. With RBA and RBNZ both standing neutral with rising currencies, the odds of jawboning are rising which may take some of the upside pressure away from AUDNZD. Resistance is close by at 1.0746 with key support sitting at today’s low of 1.0634. A break of 1.0746 targets the 1.08 handle and 19th May high at 1.0820.