Concerns about the spread of COVID-19 continued to take center stage this week. In anticipation of deteriorating economic conditions, G7 finance ministers and central bankers held a conference call on Tuesday and issued a joint statement where they pledged to use “all appropriate policy tools” to combat the risks posed by the outbreak. The statement aimed to provide confidence, but fell short of outlining specific measures or coordinated action.

The Fed however, wasted no time in acting on its pledge, making a large emergency rate cut of 50 basis points soon after. This was the first intermeeting cut since 2008. The Fed cannot cure the virus with lower rates, but is doing its part in proactively supporting the economy by using the main tool at its disposal.

The Fed is not alone. Even prior to its cut, the central banks of Malaysia and Australia reached for the scissors, while the Bank of Canada followed in the Fed’s footsteps, cutting by 50 basis points at its mid-week meeting. More central banks are expected to follow suit. On the fiscal side, President Trump signed an $8.3 billion emergency funding package to aid the fight against COVID-19. In addition, the IMF and World Bank are also making available $50 and $12 billion respectively in emergency funding to countries harmed by the outbreak.

Economic data, while plentiful, generally took a back seat and had a bit of a stale feeling in light of rapidly-evolving circumstances related to the spread of the virus. The data confirms that prior to the most recent ramp up in infections, the U.S. economy was on decent footing. The ISM manufacturing index came in below expectations in February, but still managed to hold above the 50-point threshold. Meanwhile, the U.S. ISM non-manufacturing index improved, gathering speed for the third month in a row. More importantly, the payrolls report showed that the positive labor market picture remained intact last month. The economy gained a massive 273k jobs, the unemployment rate ticked down to 3.5% and wage growth remained well above inflation (Chart 1). The higher frequency ‘weekly jobless claims’ data also showed no signs of stress, yet.

Despite the resilience on display in the data, cracks are starting to appear under the armor. Concerns about the spread of the virus were strongly voiced in the comments section of the ISM surveys, and were clearly on display in the Beige Book. This is an added signal that activity is likely to see a deterioration in the months ahead. What’s more, the monetary and fiscal measures to date have done little to assuage investor fears, with risk assets and bond yields again ending lower this week. Notably, the 10-year Treasury yield fell below 1% for the first time in history and plumbed new depths as the flight to safety continued (Chart 2).

Where we go from here will undoubtedly depend on the spread of the virus. The recent developments build the case that the U.S. will not escape unscathed, with experience from other countries suggesting that the disruption to economic activity is likely to last at least into the second quarter. 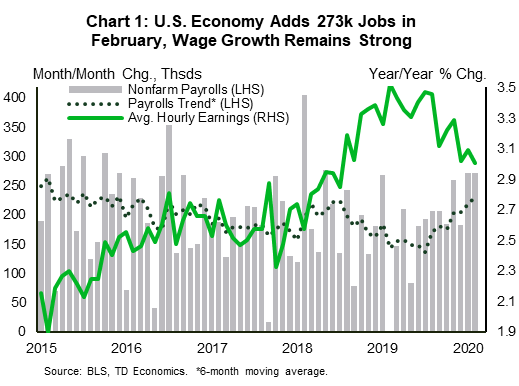 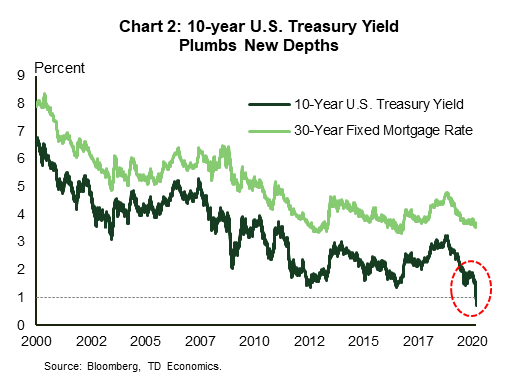 It’s been an eventful week for financial markets, to say the least. The Federal Reserve surprised markets with 50 bps of easing on Tuesday. This was after G-7 Ministers held a conference call earlier in the day on how best to address the economic threat posed by the coronavirus, COVID-19. Markets posted a mild, very brief rally in the wake of their move before retracing gains in short order. In Canada, equities were tracking modestly higher until renewed bout of selling on Friday erased gains made earlier in the week. Plunging oil prices (WTI is down about 7% today as of writing), caused by the failure of OPEC and OPEC+ countries to reach a deal on production cuts, weighed on equities.

After the Fed’s maneuver, it was the Bank of Canada’s turn to deliver. And, deliver they did, with policymakers lowering the overnight rate by 50 basis points on Wednesday. Governor Poloz added further clarity to the Bank’s actions in a speech later in the week, painting a bleak picture of the current economic backdrop. Top of the list of headwinds was the threat posed by COVID-19, alongside disappointing growth at the end of last year and the early part of 2020. On this latter front, January’s soft merchandise trade data reinforced the expectation of weakness in the first quarter. Indeed, export volumes plunged 3.1% in January, on a sharp drop in shipments of energy products and motor vehicles and parts. Import volumes also fell, but to a much lesser extent, pointing to net trade being a drag on early-year growth.

Bond yields, which had been heading lower, dropped even further in the wake of the Bank of Canada’s decision, with the yield on a 10-year bond falling to its lowest level since at least the late 80s by the end of the week (Chart 1). These sharply lower interest rates should, in Governor Poloz’s view, help stabilize housing markets by offsetting a virus-related decline in consumer confidence.

The current snapshot of the housing market, however, shows no signs of weakness. Preliminary data on housing activity in key markets suggests that sales increased significantly in Toronto, and slightly in Vancouver, last month. Toronto’s gain was particularly noteworthy, as sales rose by a massive 15% m/m, supporting a roughly 17% y/y gain in average home prices. And, the prospect of these low yields persisting will likely add steam to Toronto’s rapidly heating market just in time for the spring selling season.

Canada’s (so far) resilient jobs market was a major feature that the Governor keyed on in his speech. We received further confirmation of this resilience this week, with February’s job report noting a solid 30.3k rise in new positions. Adding to the positive tone, gains were concentrated in full-time jobs (Chart 2). Policymakers are watching the evolution of the jobs market with an especially keen eye.The March jobs report has an additional element of intrigue, given that virus-related fears really began to surge in late-February. Ultimately, February’s healthy jobs report is backward looking, and the Bank appears more concerned about what lies ahead. As such, the assumption that additional easing is on the way, to further guard against virus-related risks, is likely a safe one. 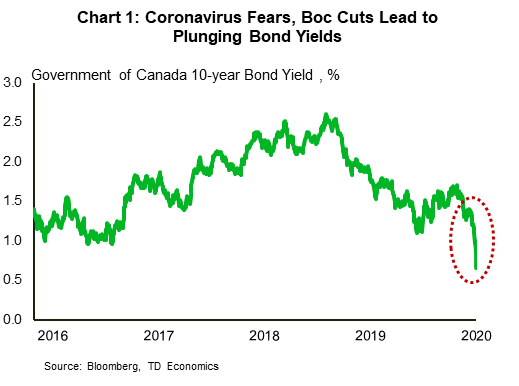 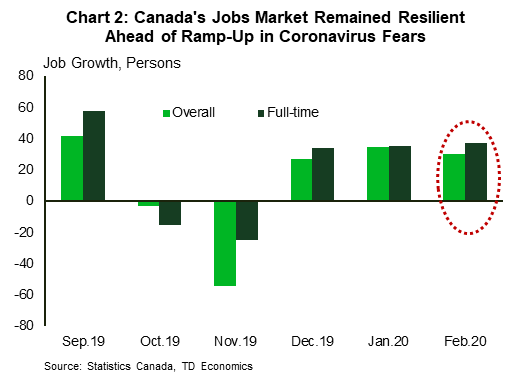 The overall CPI was likely held down by a gasoline-led drop in the energy component. We see a close call between our 0.1% m/m forecast and 0.0% m/m after rounding. Gasoline prices will probably be down in the March report as well. We estimate a 12-month change in the overall index of 2.3% in February, down from 2.5%. The 12-month change will probably drop below 2% in the March report. We expect a fairly trend-like 0.2% m/m rise in the core component (0.19% before rounding), keeping the 12-month change at 2.3%. That matches last year’s average, consistent with a fairly stable trend. The slowing in the heavily-weighted rental components a few months ago appears to have been no more than noise. 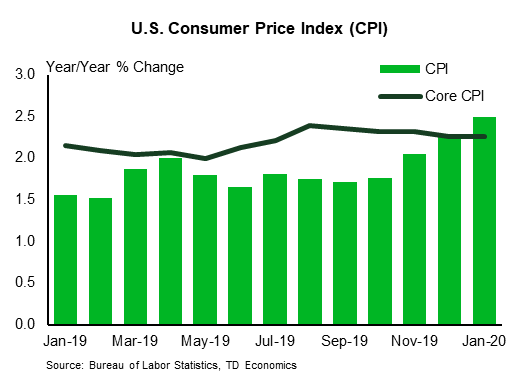 TD looks for housing starts to edge lower to a 208k annualized pace in February, reflecting a return to seasonal temperatures after a warmer than usual January provided a tailwind to construction. Demand for new housing remains elevated across Canada due to strong population growth, and with months of inventory on the resale market falling below 2016 lows we expect residential investment to remain a source of strength going forward. 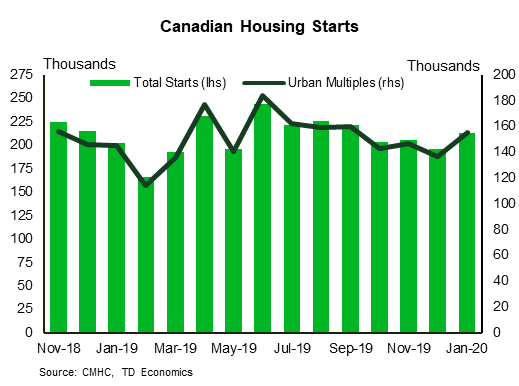