The Canadian dollar (CAD) has come under heavy pressure over the past few weeks in the wake of dramatic economic and financial developments. Investors flight to safety into $US-denominated assets and the dramatic decline in world oil prices have had a major impact on foreign exchange rates. The CAD reached a low of 68.1 US cents (on of March 19), down from 75 cents earlier in the month, right around the previous closing low of 68.5 cents reached in January 2016.

The depreciation of the CAD has coincided with two related developments. The global economic outlook has rapidly deteriorated amid mounting concerns that the economic impact of Covid-19 could be deeper and more prolonged that originally envisaged. The sharp decline in world oil prices resulting from the decline in global growth has been accentuated by the Russia-Saudi Arabia price war. The West Texas Intermediate (WTI) crude oil benchmark price closed at $20.4 per barrel on March 18th, surpassing the low of $26.2 reached in January 2016, before recovering to its current level around $25 (as of March 19th).

While dramatic, these developments are not surprising given the CAD’s long-standing reputation. Crude oil1 currently has a weight of almost 50% in the Bank of Canada commodity price index, up from 20 percent in the late 1990s. The CAD has moved closely in line with world oil prices since about that time (Chart 1). The simple correlation suggests that the CAD will continue to trade at depressed levels if world oil prices remain at current levels (around $25 per barrel), similar to the situation in January 2016 (Chart 2). 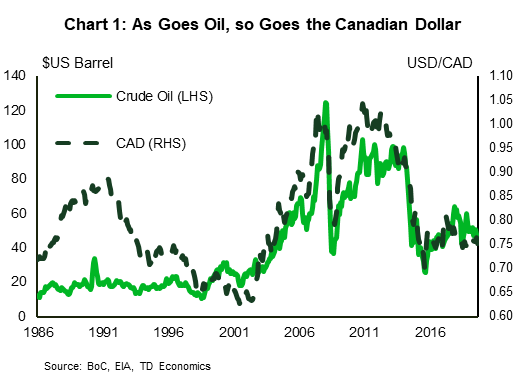 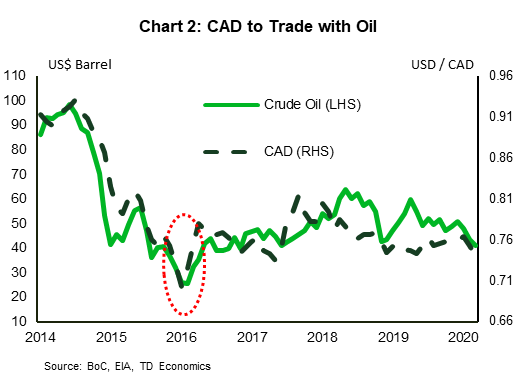 The significant depreciation of the CAD over the past few weeks has occurred while US interest rates declined below those in Canada. The Fed responded to the impending economic downturn in an unprecedented manner by cutting the fed funds rate by some 150 bps in just 11 days, while the Bank of Canada cut the overnight target rate by “just” 100 bps. The Canada-US interest rate differential widened by about 20 bps at the 3-month tenor, while differentials along the yield curve exhibited high volatility.

These developments are not surprising from a historical perspective. Broad movements in the CAD are not closely aligned with Canada-US interest rate differentials. For example, Canada-US differentials at the short- and long-end of the term structure shifted substantially in 2018-19 during a period when the CAD was relatively stable (Chart 3). 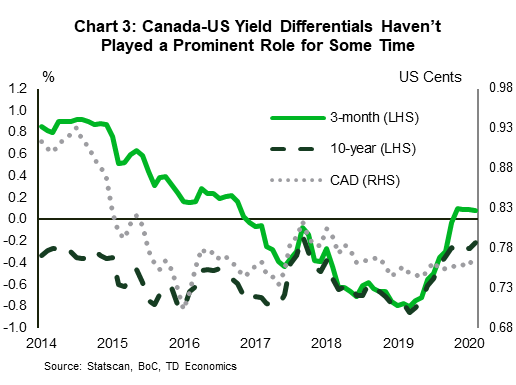 Now that the fed funds rate is at the zero lower bound and the Bank of Canada is very likely to follow suit shortly, there is little room for differentials in policy interest rates to be a factor in the foreign exchange market.

Interest rate differentials could, however, play a prominent role if financial markets become concerned about risks surrounding impending fiscal pressures. Governments in Canada and the US (among many other countries) have responded quickly with ambitious fiscal stimulus plans in an effort to mitigate the depth of the downturn and support a timely recovery. These efforts could prove to be counterproductive in the absence of a credible medium-term fiscal plan.

The Canadian federal government has been able to keep its debt burden on a downward profile (unlike some provincial governments) and currently has one of the lowest public debt burdens among advanced countries. By contrast, the public debt burden in the US is at record post-war levels and there is high uncertainty surrounding the medium-term fiscal outlook. Fiscal policy developments in Canada and the US will therefore likely take on a prominent role in influencing the CAD over the medium term.

In normal times, a 12% depreciation of the CAD against the USD would be major news. These aren’t normal times, to be sure. The CAD has not been at the center of the storm. On an effective basis (relative to Canada’s trading partners), the CAD has depreciated by 6.5% year to date, while other commodity currencies, notably Norway, Brazil, Russia and Mexico, have depreciated by more than 15% (Chart 4). With limited scope for monetary policy in many countries, fiscal policy will be called on to do the heavy lifting. From this perspective, the CAD stands to gain over the medium from Canada’s strong fiscal position. 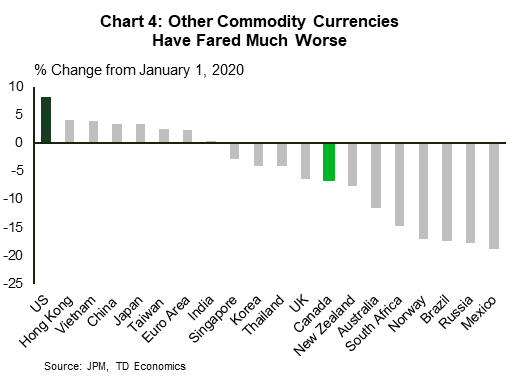 On the positive side, it is unlikely that the world price of oil will continue trading at current levels indefinitely. Breakeven prices based on operating costs for production of existing wells are well above current levels in most countries. Also, the USD is currently in high demand as a safe haven in the risk-off environment. As in past episodes, the heightened uncertainty will subside. Economic fundamentals will then play a more prominent role in the foreign exchange market.