Today’s data calendar saw the release of the Eurozone manufacturing and service sector PMIs for March, which we view as the most critical European data so far in terms of trying to glean insights about the economic damage from the COVID-19 virus. Until now, Eurozone economic figures have essentially been “pre-virus” data—for example, the PMI surveys held up quite well through February, while activity data (e.g. retail sales and industrial output) are available only through January.

The Eurozone March PMI surveys confirmed that the economic damage from the COVID-19 crisis will be very severe. The March services PMI fell to a record low of 28.4 from 52.6 in February, even weaker than the consensus forecast which was for a reading of 39.5. Meanwhile the manufacturing PMI also fell noticeably to 44.8 in March, from 49.2 in February. Other than representing dramatic declines, what could these results tell us about the potential for Eurozone GDP growth in Q1 and Q2? In this article we use the PMI surveys to estimate to potential order of magnitude of Eurozone GDP declines during the first half of this year. To be clear these do not represent precise forecasts, but rather a “ballpark” for where Eurozone GDP outcomes may end up.

The first step in developing our estimate is to understand the significance of various Eurozone economic sectors. For 2019, services output accounted for 73.5% of GDP, while industrial output accounted for 20% of GDP. The other sectors of the economy were much smaller, with construction output around 5% of GDP and agricultural output 1.5% of GDP. The takeaway is that if one is able to calculate reasonable estimates of the services and industrial sector, one has a reasonable estimate of the overall GDP outlook.

Given its dominance within the economy, we first assess the outlook for the service sector. Here, we note the Eurozone services PMI has a close correlation with quarter-over-quarter services growth across the economy. Using a statistical regression since 1999, we note a solid R-squared or degree of explanatory power of 65%. Figure 1 uses that statistical regression to “line up” the services PMI with services output growth. 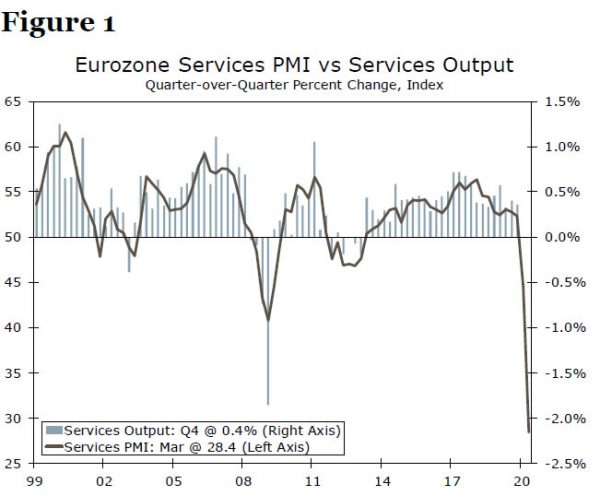 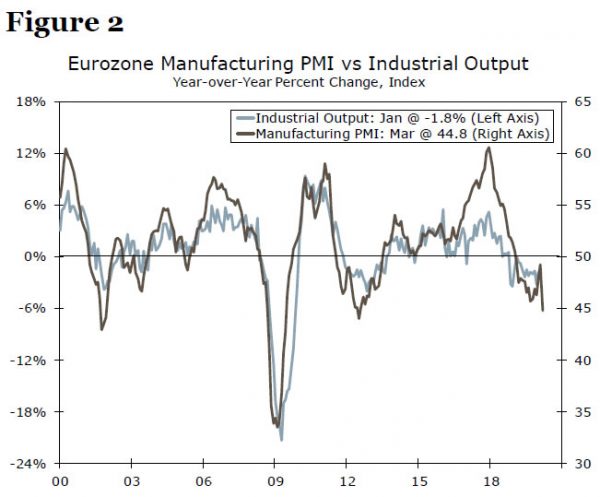 That said, we suspect the risks to these estimates are tilted to the downside. Over the weekend the Italian government said Italy’s industrial sector will be completely shut down for the next two weeks, something which is likely not well captured by these initial March PMI figures. We see potential for the manufacturing PMI to fall further, and industrial output to weaken further, during Q2.

Putting it Together: It Doesn’t Look Good

To recap, the March PMI surveys are likely consistent with a moderate decline in services output in Q1 and a much larger decline in Q2. For the industrial sector, we view the figures as consistent with a small decline in output in Q1 and a larger decline in output in Q2. Making reasonable assumptions about construction output and combining all the sectors together, these PMI figures could be a prelude to a Q1 GDP decline of 1.6% quarter-over-quarter annualized, and a Q2 GDP decline of 8.4% quarter-over-quarter annualized. Allowing for the possibility of overshoot there is a distinct possibility the Eurozone economy could record a double-digit decline in Q2, with the contraction in output during the current episode likely to be of a similar order of magnitude to the falls seen during the global financial crisis.

Given the dire near-term outlook for the Eurozone, governments across the region have finally started to step up with fiscal stimulus. In particular, Germany suspended its balanced budget rule and the government announced supplementary budget of €156 billion for additional social spending and company aid, or around 4.5% of GDP. In addition, Germany has agreed to set up a fund of €600 billion to provide loans and guarantees, as well as buying stakes in stricken businesses. Italy’s government has announced a €25 billion stimulus plan, though that appears likely to fall short of what is required for Italy’s hard hit economy. Further stimulus measures are possible and perhaps likely, with recent market discussion turning towards whether the region’s European Stability Mechanism fund could be mobilized to provide support for some of the region’s economies.

Still given the magnitude of the COVID-19 shock on the economy, we doubt that prospective fiscal policy measures (as well as past monetary policy measures) will be sufficient to prevent a large economic downturn. As we highlighted earlier in this report, the Eurozone economy could face large contractions in activity in the coming quarters. During this period, we suspect the bias will remain tilted towards even further easing in Eurozone monetary policy and fiscal policy. From a currency perspective, the outlook suggests the euro should remain relatively subdued in the near-term. Given the economic outlook and policy outlook, we see little reason to expect meaningful gains in the EUR/USD exchange rate for the time being.