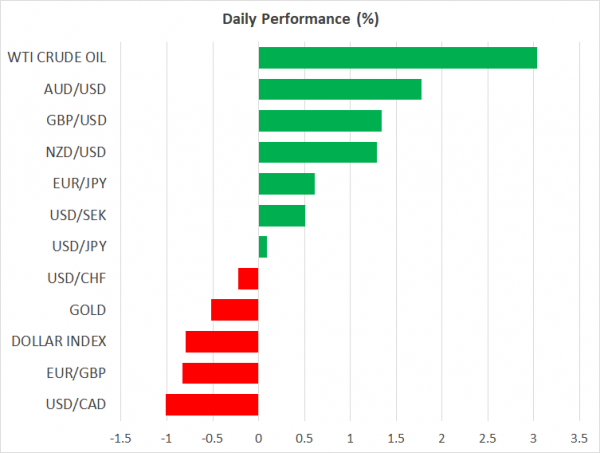 Global markets staged a heroic recovery on Tuesday. The Dow Jones climbed almost 11.4% to record its strongest day since 1933 as investors took heart that the US Congress would soon approve a gargantuan rescue package to cushion the virus blow. Some early signs that the dire situation in Italy is improving probably helped as well.

Senate Republicans and Democrats announced overnight that they finally reached a deal on a $2 trillion rescue package, and although details are still scarce, it is rumored to include relief for companies and hospitals, as well as sending cheques to all Americans. The vote is expected later today but considering that the White House alongside the Republican and Democratic leaderships have all signaled their support already, this seems like a mere formality.

Another piece of good news came from Italy, where the number of new infections declined, signaling that the contagion may be finally slowing and that the draconian quarantine measures of recent weeks may be starting to pay dividends. Granted it’s still too early to draw any real conclusions, but if this persists, it could spark hopes that the rest of Europe will follow along. Since Italy went on lockdown before everyone else, it is now viewed as the ‘canary in the coal mine’.

But can it last?

The question now is whether this marks the beginning of a sustainable recovery in stocks, or just a rebound in a broader bear market. Even though futures point to another higher open on Wall Street today, this recovery still looks fragile overall. Yes, the markets are currently riding high on optimism about the fiscal package, but following the latest bounce, that might be priced in. And outside of a possible medical breakthrough, these might be the best news investors get for a while.

In other words, there’s little to look forward to in the coming days, but a lot that could go wrong. An overwhelming amount of stimulus has already been announced and discounted, and while that has been enough to lift markets for now, fear is still in the air and the mood could turn around just as quickly on any negative news.

Hence, while this recovery could continue for now, it’s still too early to call a bottom in stocks and the real test might be whether markets hold up after the US initial jobless claims on Thursday, which might show Americans being laid off at a record pace.

Aussie and kiwi smile; is gold coming back to life?

The improvement in risk sentiment dominated in the FX sphere too, with beaten down commodity currencies like the aussie and kiwi rallying sharply while defensive currencies like the yen and the dollar surrendered ground. In other words, a reversal of the moves in recent weeks. Yet, as per above, this still doesn’t seem like a reversal in the recent trends, but rather a correction.

Gold stood out as well. The yellow metal surged yesterday, alongside stocks, but that positive correlation might begin to fade. Whereas gold fell with stocks in recent weeks as margin calls forced funds to ‘liquidate everything’, we now seem to be entering a second phase where gold decouples from stocks as fear-induced buying eclipses liquidity-driven selling.

With central banks unleashing infinite quantitative easing at a time when fear is running rampant in the markets and government debts are about to explode, this looks like the perfect cocktail for bullion.

As for today, durable goods orders out of the US might attract some attention, but the focus remains squarely on any virus news, especially out of Italy. 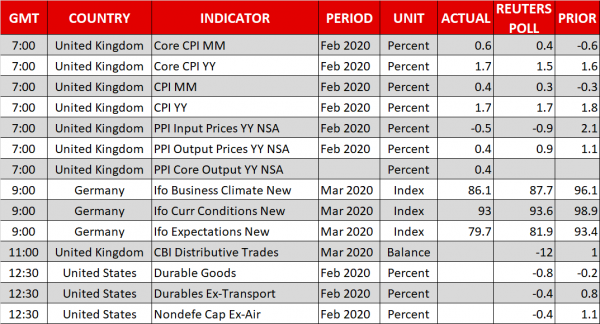