Stock prices are making a V turn after experiencing the sharpest downfall since financial crisis and bargain hunters are looking for the right time to buy. Hopefully, there are reasons to believe that the positive trend could continue, though on the other hand it is too early to rule out a dead cat bounce, and it is even challenging to predict a full recovery after the virus drama ends. Hence, while it looks like a good opportunity to get exposure to the market, a portfolio overloaded with stocks is not a sensible option yet.

While, Covid-19 seemed a Chinese issue early in January, it did not take long for Europe and the US to become the hotspot of the health crisis as the invisible sneaky virus caught governments unprepared.

The S&P 500 crashed down by more than 30% in four weeks from record highs to the lowest since 2016 and the German DAX 30 suffered a slightly bigger damage of 36% as businesses feared that the global lockdown could trigger a financial shock of the size of the one of 2008 or worse. 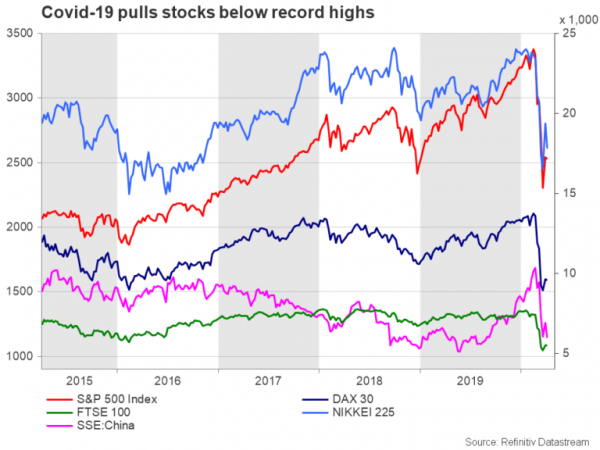 The sell-off could have continued but thankfully governments and central banks came to rescue, activating emergency plans to provide some footing to their economies and reduce the risk of mass defaults. Particularly, key central banks such as the Fed slashed interest rates immediately and expanded their QE program substantially, while those who had negative rates and no comfort for additional cuts such as the ECB and the BoJ limited their actions to the QE content. Meanwhile on the fiscal front, governments set up rescue funds to businesses and consumers that face liquidity problems due to the coronavirus pandemic and increased social care benefits, with the Trump administration approving a $2.2 trillion stimulus package and other nations implementing similar measures.

Businesses have secured some support for now which could get larger in the coming months if effective remedies for the virus are not discovered before year-end. Consequently, that feeling of safety breathed life back to the volatile stock markets that are currently trying to rebuild their way higher, and more importantly fed speculation that the massive downfall may have hit a bottom.

Of course, it would be wrong to exclude that idea of a bottom given the recent slowdown in the daily number of new infections in Italy and earlier in China but it would also be more naive to assume that the worst has passed at a time of questions such as when the virus impact will peak and how long the lockdown status will last.

The status quo at the time of writing is that the most painful times have yet to come, especially in the US, where active cases keep rising exponentially. At the same time, the fact that some countries such as the UK, which has been criticized for a slow initial response to the virus, have not experienced a sharp outbreak like Italy’s, increase worries that they may be at the start rather than the end of the battle. Worryingly, Chinese cases also need to be watched as some lockdown restrictions are lifted but then reimposed to prevent new waves of the infection. 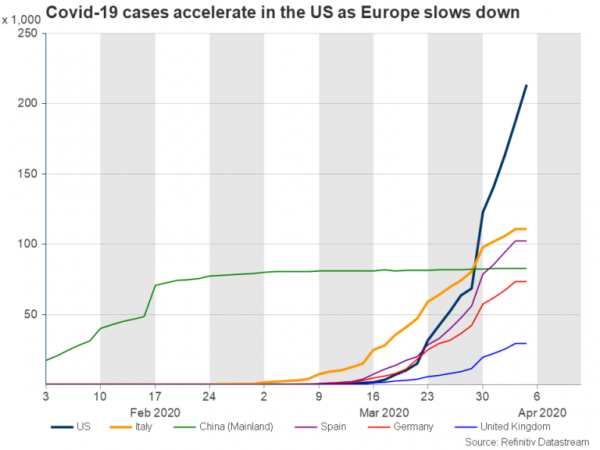 Even more concerning is the true number of infected people worldwide that doubt the reported death rate. Some people display mild or no symptoms and therefore are not included in the data, while some countries are lacking medical equipment and use different criteria to test potential Covid-19 patients, making the detection a hurdle. Hence, even though big tech companies are stepping up efforts to bridge the misinformation gap through smart apps, it would not be surprising if a second more aggressive virus wave takes place in the coming months once governments unlock economies as soon as at the start of May.

What if the virus crisis ends?

Moving to the next chapter, like in science-fiction movies, the virus drama will end at some point and traders are wondering whether the stock markets will return to the old bullish times.

Unfortunately, this may not be case in the European Union if member states become more politically divided than currently are.

Last week nine members led by Italy proposed the issuance of a mutually financed coronabond worth of 1.5 trillion euros– a Eurobond pre-coronavirus times – that would raise capital for the states that need it most, sharing the fiscal risks across the continent. However, fiscal hawks in Germany, Netherlands and Austria backed by the president of the European Commission shot down the idea of a shared debt instrument, saying that such a plan would encourage bad behaviour and would not be fair for those who have been taking precautionary measures in times of solid growth. Instead, as an alternative they insisted that the European Stability Mechanism (ESM) credit program that forces borrowers to take regulatory and economic reforms, is a better choice.

The problem is that compared to the 2008 financial crisis, the new threat is not a product of domestic causes but an external global enemy that found the Eurozone fragile after more than a decade of slow recovery from the Great Financial Crisis. More importantly, the banking sector of southern members, who recently exited the ESM bailout fund program such as Greece, is still at risk and Greece itself has yet to rise above the investment grade. This fact could become the trigger of criticism against the EU stance to handle negative shocks and an opportunity to search for alternative more effective strategies. 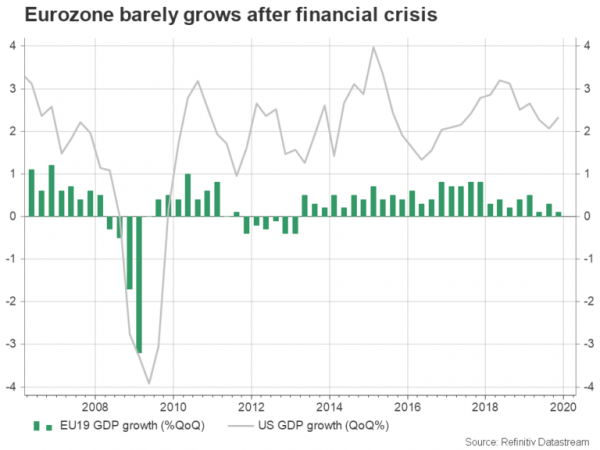 The certain thing, however, is that pointing fingers to sensitive economies at the moment is not part of a solution. Of course, a new more drastic plan could be time-consuming since all national parliaments must give their approval. Still, the sooner some key states start to compromise, the smaller the damage from the virus, and the smaller will be the risk of a political turmoil will be after covid-19 is gone.

Besides that, remember Brexit and the trade war? Those issues are currently on a waiting list after being partially solved in late 2019 and are expected to come to the centre again once the health crisis ends. Therefore, for the talks to resume smoothly and stock markets to secure a sustainable rebound, the countries involved should show cooperation during the virus crisis and keep relations healthy. In the US, a successful approach to deter a sharp increase in the unemployment rate could enhance President Trump’s popularity at the November elections.

From a technical perspective, negative risks also remain intact despite the latest rebound. Looking at the S&P 500, it is barely holding above a long-term supportive trendline after the latest upside reversal, struggling to overcome the 200-week simple moving average (SMA) too. Yet, according to the RSI and the fast-Stochastics, an upside correction is possible as the market is hovering near oversold waters, though to convince traders that the worst has passed, the index should bounce back above its previous highs and the 3,000 level, where the 61.8% Fibonacci of the recent free-fall is located. Before that, resistance near the 200-week SMA, which currently hovers around the 38.2% Fibonacci of 2,655 and the 50% Fibonacci of 2,798 need to be overcome.

In the event the index pulls forcefully back below the ascending trendline, the door would open for the 2,300 -2,190 supportive zone. Breaching that floor, the next key obstacle could emerge somewhere between 2,000 and 1,860.

RBA Board Keeps Cash and Bond Rate Targets on Hold