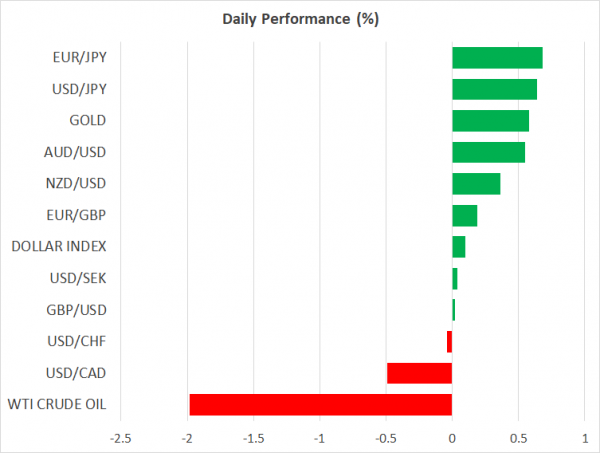 Risk appetite returns on hopes ‘peak virus’ is behind us

Global markets woke up in a better mood on Monday, with stocks in Tokyo gaining roughly 4% and futures pointing to a similar open in New York, as a slowdown in new infections in Europe signaled that the draconian lockdowns are finally starting to pay dividends. The growth rate of new cases and deaths has clearly started to decline in Italy, indicating that the outbreak may have reached a plateau and that brighter days might lie ahead for virus-ravaged Europe.

Naturally, the Japanese yen is surrendering ground in this cheerful environment, as investors seem happy to trim their defensive exposure and deploy funds into riskier ventures.

Is this the beginning of a healthy rally, or are markets just thirsty for any positive news and are prematurely front running a recovery in the global economy? On balance, this still looks like a case of over optimism.

Yes, there are undeniable rays of light in Europe, and even America seems to be gradually ‘levelling off’. Alas, a lot of uncertainty is still in the air and there is no clear timeline for when any of these economies will be reopened, which is the most important variable for markets.

And while traders are calm for now, will they remain so tranquil in the coming weeks as consumption falls off a cliff, unemployment skyrockets, and corporate earnings forecasts are slashed to oblivion? Not to mention the very real possibility that lockdowns are extended well into May or even June, and the horrid headlines that could hit until then, from defaults to second-wave virus outbreaks.

The bottom line is that the worst may not be over, and it seems premature to say that the bottom is in for stocks. Arguing in the same direction, gold is trading well higher today, indicating that many investors are still ‘playing defense’ even as stocks recover.

The energy market is back in the spotlight, with crude prices opening lower today after Saudi Arabia and Russia delayed until Thursday a meeting to discuss production cuts that was scheduled for today. The two countries blamed each other for the collapse of the talks last month, dashing hopes for a quick agreement. Yet, oil prices have already recovered most of their losses, indicating that this delay wasn’t seen as a signal the production deal will fall apart.

As we approach Thursday’s meeting, it wouldn’t be surprising to see more speculative gains in oil, as all parties have an incentive to sound optimistic and play up the prospect of a deal. Currencies like the loonie could benefit.

That said, traders may be disappointed by the actual outcome. OPEC and Russia have been vocal that they are willing to cut only if other nations – like the US – also chip in. That’s highly unlikely to happen. Even if everyone chips in, it’s still difficult to envision any cut bigger than 5 million barrels, which would do next to nothing to balance a market that’s about to see 20-30 million barrels in demand wiped out. With expectations of a 10-million-barrel cut flying high, markets may ultimately be disappointed by the size of any cut, eliciting a potential ‘sell the fact’ reaction.

Elsewhere, the US employment report on Friday was much worse than feared, with nonfarm payrolls clocking in at -701k, but markets took the news in stride. The calendar is light today, though things could get more exciting early on Tuesday, when the Reserve Bank of Australia concludes its policy meeting.