It didn’t take long for the US dollar to reclaim its crown as king of currencies after a brief but sharp sell-off in late February. An acute shortage of dollars across global markets, driven by a panic rush for cash as the virus turmoil deepened, has bolstered the US currency’s safe haven status. But amid some tentative signs of a possible levelling-off in the rise of new infected cases, is there a risk of the dollar falling off a cliff?

As the COVID-19 crisis has slowly unfolded, the progressing phases of this health emergency have brought about a different reaction in currency markets. When the coronavirus first started taking hold in China in early February, the greenback enjoyed some moderate flight to safety as investors predicted a China-led global slowdown where the sturdy US economy would be mostly immune to its effects.

However, once the virus started spreading outside of China and it became apparent that no country would be spared, the dollar tumbled as investors (rightly) bet that the Federal Reserve will be forced to slash interest rates in response to the crisis. The dollar’s decline was dramatic – it skidded from a 3-year top against a basket of currencies to plunge to a 17-month low. But this was hardly surprising given that what had been keeping the greenback elevated for so long – its interest rate advantage – was wiped out when the Fed, as expected, cut rates to the zero bound. 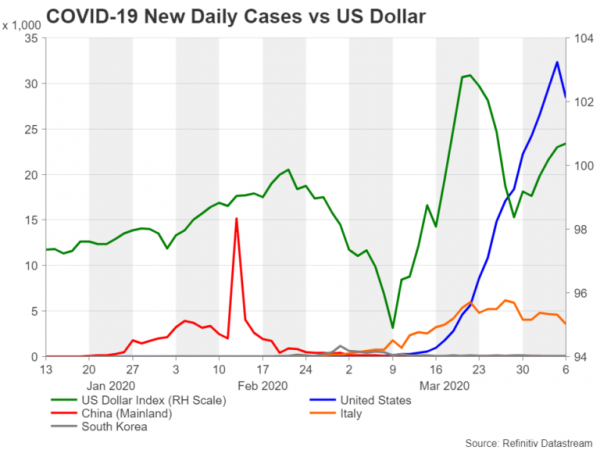 Once investors priced in this ‘adjustment’, the dollar could only turn upwards again. However, by this point, markets were overcome by the virus panic, which triggered a massive dash for liquidity, fuelling already high demand for the currency. The rally reached a peak on March 20, taking the dollar index just shy of the 103 mark – a level last seen in January 2017 when optimism about the US economic outlook was riding high soon after the election of President Trump in what was a starkly different backdrop.

The dollar funding squeeze has since eased as the Fed and other central banks have taken unprecedented action to calm markets and alleviate the liquidity strains. But despite rebounding slightly, most currencies remain pressured against the king dollar as the duration and severity of the virus crisis is far from clear, with the lockdown in many countries potentially lasting into the summer.

As long as markets remain marred by gloom, there is little that can knock the dollar from the top. But what happens when the virus outbreak does start to subside? There are already some green shoots in Europe, with both the number of new infections and deaths slowing in the two main hotspots – Italy and Spain – in the past week.

Still, it’s early days and experts are warning against reading too much into the figures and relaxing lockdown measures too soon. However, markets don’t need to wait until the restrictions have been lifted to rally and risk sentiment is likely to return as soon as there are convincing signs that the virus spread is peaking or has peaked.

The jump in stocks and risk-sensitive currencies like the Australian dollar during the small bouts of risk appetite indicate markets are ripe for recovery. So far, those attempts have been unsustainable, but should the number of confirmed cases really do begin to climax, the dollar looks poised to suffer from any positive shift in market sentiment.

The question is, how big is the downside risk if a global economic recovery appears just around to corner? That will probably depend on how well placed each economy is to bounce back from a depression-like downturn. Many analysts are projecting the US economy will experience its worst contraction since the Great Depression of the 1930s.

US stimulus trounces others

The US government has pledged a fiscal stimulus amounting to about 10% of GDP to fight the fallout from COVID-19. Some countries like Japan, Spain and the United Kingdom have announced far larger stimulus, but another virus relief bill is in the works in the United States and combined with the Fed’s bazooka, markets are less worried about America than they are about Europe.

That’s because although some European nations have promised huge spending packages, including Germany, the response by many governments falls short of what is needed to combat a full-blown crisis. There are worries that unless the European Union, or specifically, the Eurozone, takes bold action such as agreeing to launch mutualized debt, or coronabonds, to ease the debt burden on struggling members whilst shoring up their economies, the virus impact will be felt for generations to come.

But there are concerns for even those countries that have stepped up to the plate. Japan’s fiscal stimulus of 20% of GDP is impressive but when considering its huge debt-to-GDP ratio (238%) and the lack of monetary firepower, cracks can be seen in the economic plan. In the UK, the prime minister, Boris Johnson, has been hospitalized with coronavirus, raising doubts about who will lead the country out of the crisis, while just beyond the exit of the virus tunnel there is Brexit awaiting.

So when (and hopefully not if) the world has successfully beaten this pandemic, it’s very likely that the dollar dynamics may not change much even as many things about life as we knew it alter irreversibly.

Immediate risks are to the downside

In the more near-term, however, the dollar’s fortunes will be dictated by the daily virus statistics. With the US being behind Europe in terms of how far into the outbreak it is, the immediate risks for the US currency are tilted to the downside. 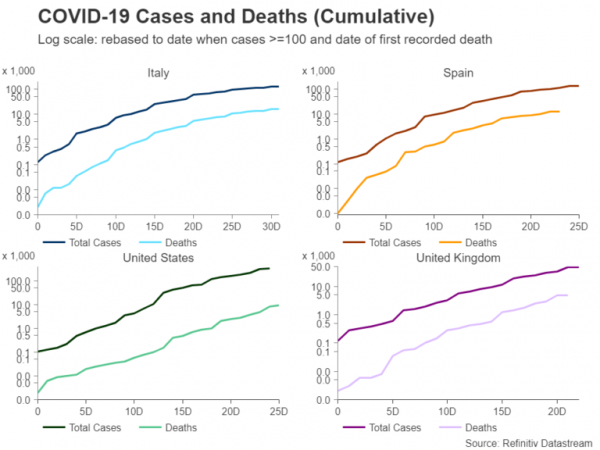 The number of new cases in Europe appear to be levelling off, meaning it may only be a matter of time before shuttered businesses reopen, while the US is probably at least two weeks away before that starts to happen and this is already pressuring the greenback. The dollar index has started to retreat and could settle around its 50-day moving average just below the 99 level. The 50% Fibonacci retracement of the March upswing also lies in this region, underlining the significance of this support area. Breaking below it would leave the dollar index exposed to a steeper sell-off towards the March trough of 94.65.

There should be some caution, however, about any extended declines in the dollar as its index’ largest constituent – the euro – is likely to be weighed by economic and political worries well beyond the virus pandemic, limiting the scope for a meaningful rally in euro/dollar. Nonetheless, a surge towards the $1.15 level seems plausible if Eurozone members are able to find common ground for a coronabond, which would greatly assist the economic recovery. 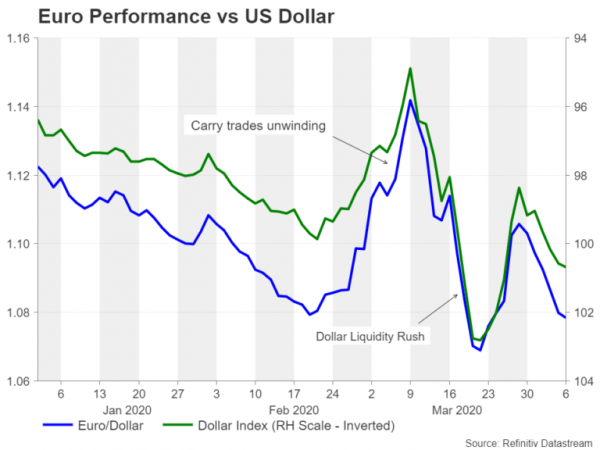 In the medium to long run, it’s difficult to imagine the dollar index being pulled too far below or above the 100 mark. That is, unless interest rate differentials were to come into play again, and that would depend on either a material change in the outlook for the US economy or that of its rivals.