The Bank of England’s new governor Andrew Bailey will brief markets about the central bank’s policy decision and announce his first quarterly economic projections on Thursday at 06:00 GMT, earlier than the usual timing in order to comment on the interim Financial Stability report as well. Having deployed big stimulus firepower in previous meetings, the bank could stand pat this week, with markets turning attention to growth forecasts after warnings of a painful contraction in Q2. A speech by the UK Prime Minister later in the day could be another driver of volatility for the pound as Boris Johnson is eagerly awaited to introduce his re-opening plans.

March was a headache for the Bank of England as the Covid-19 pandemic forced policymakers to suddenly cut interest rates twice by 0.50 and 0.15 percentage points to 0.1% in eight days – the lowest in three centuries – to save the economy from an imminent recession. The asset purchase program was also expanded significantly by 200 billion pounds financed by printing money, while among others, a new scheme of cheap funding for banks was launched to boost lending to struggling medium- and small-size companies.

With interest rates almost around zero and Bailey viewing negative rates as unfavorable in previous meetings – even though not excluding them – it seems that there is not much comfort left for further rate cuts.

On the QE front, however, there is still some space for additional asset purchases according to the BoE chief who is facing a ceiling at 645 billion pounds this year, above the current total amount of 514 billion pounds. Meanwhile, the government has revealed that it will sell 180 billion pounds of gilts in the three months to July, increasing speculation that the Bank could digest a portion of that amount in the coming months, likely buying more corporate debt as well. But questions are arising if such a decision this week could be premature before the government’s re-opening plans scheduled to be presented on Thursday take effect. The Brexit story continues to be a risk too and maybe the Bank should leave some stimulus for later as the December deadline is nearing. Nevertheless, financial support from both the government and the central bank may be needed to calm the economic depression, deterring companies to reduce the number of employees in the coming months. Therefore, if the Bank does not step up on Thursday it could show willingness to do as soon as in June. 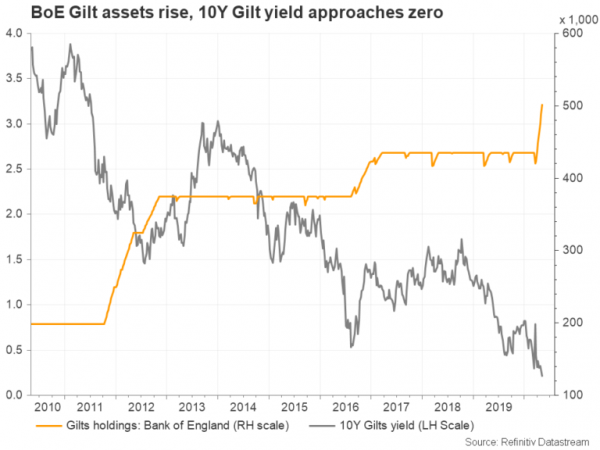 Growth forecasts to be the hot topic

Quarterly economic projections and particularly growth estimates are expected to be the hot topic of the meeting especially after Bailey said that a 35% contraction in Q2 and an annual plunge of 14% in 2020 estimated by the Office for Budget Responsibility could be fair, adding that a worse picture cannot be ruled out either. More relevant, however, could be the bank’s opinion on how fast the economy could heal as the world is gradually removing lockdown measures, with the central bank pushing somewhat back on the idea of a V-shape recovery recently.

The fact that the British government has shut down the economy with a delay compared to other European countries, and hence has yet to experience a sustainable decline in active infection cases, suggests that the UK could fall behind its counterparts in terms of recovery. If the government decides to put its re-opening plans in action as soon as next week, it should relatively take more cautious steps to prevent a second spike in virus cases, which could subsequently keep the unemployment rate elevated for a prolonged period of time, maintaining the risk of business failures high as well. Recall that the UK is currently the second-worst afflicted nation in the world in terms of coronavirus deaths and the worst-afflicted in Europe as it has recently surpassed Italy in the number of fatalities from the disease. 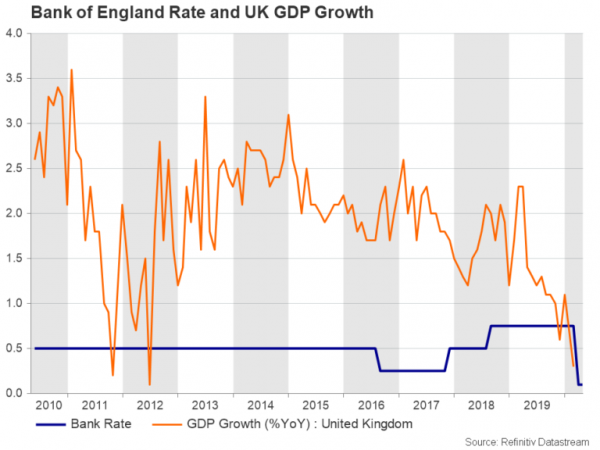 Regarding the FX market reaction, the pound could bounce up if the Bank enhances its QE program as an increase in money supply during crisis times is alleviating the economic pain. Still, any rebound could prove short-lived if policymakers cast doubts about a rapid economic recovery, letting the currency to extend this month’s sell-off. Against the US dollar, immediate support to downside movements could be the supportive trendline near 1.2340, while a more important barrier could be the previous low of 1.2245, where any close lower would clearly violate the uptrend started from a 35-year low of 1.1404. A cautious speech by Boris Johnson accompanied by a more gradual removal of restrictions than markets believe could add to the bearish sentiment.

On the other hand, regardless of whether the Bank raises its bond purchases or not, an optimistic message about the path of the economy could still allow the pound to gain ground and challenge the 1.2450-1.2485 nearby restrictive area. Higher, the bulls should breach the 1.2520 resistance to retest the 1.2600 level.