The majority of the market’s focus continues to be on measures taken by central banks to overcome the economic damage, caused by the coronavirus outbreak. Today central banks in the UK, Norway and Czech Republic will be announcing their Interest rate decisions. BoE seems willing to remain on hold at 0.10%, given that the bank lowered its rate already twice in March. Currently GBP OIS imply a probability of 99.62% for the bank to remain on hold. However, the event may not be important for the interest rate decision but rather for information on BOE’s QE program. Analysts also expect Norges Bank to keep the key policy rate unchanged at 0.25%. However, due to the special circumstances Norges Bank will provide updated forecasts for the Norwegian economy and hold a press conference following the announcement. CNB’s interest rate decision will be released in the US session and the bank is widely expected to cut rates by 50 basis points to 0.50%. Yet other analysts forecast a cut by 25 basis points. According to Czech financial data, April was also a difficult month for the economy as the Manufacturing sector continue to contract. GBP, NOK and the CZK could come under strong volatility upon release of their central bank decision and caution is advised. GBP/USD moved lower and tested our (S1) 1.2310 level in the previous sessions. If the downward momentum continues then our (S2) 1.2225 line and even lower our (S3) 1.2160 hurdle, are both possible stop points. In the opposite direction and in an upward trend we have noted first the (R1) 1.2390 line and even higher the (R2) 1.2480 level which were both tested in the previous days and so could come into play. The highest level we have noted is the (R3) 1.2570 which was last seen on the 1st of May.

The greenback continued to move higher yesterday performing its third consecutive upward session. The USD continues to climb, even as more negative financial data keeps coming in for the US economy. Some analysts believe the USD could continue to get stronger against its major counterparts in the next weeks, as the reaction we have seen so far is that risks coming from the virus outbreak are fuelling demand for the USD. Yesterday, the ADP National Employment report indicated that the U.S. private sector cut 20 million jobs in April. Traders and analysts now expect the US employment report on Friday to clarify how much damage in total was made in April. However, the unemployment rate is forecasted to reach 16%. The USD Index moved higher in the latest sessions and tested our (R1) 100.30 line but was unable to breach it. If the upward momentum is to continue then the levels we have noted are the (R2) 100.55 line and the (R3) 100.85 level. If the Index is to return lower we have noted the (S1) 99.92 line, the (S2) 99.55 level and the (S3) 99.20 hurdle. Yet the index remains in an upward motion since the start of the current month. 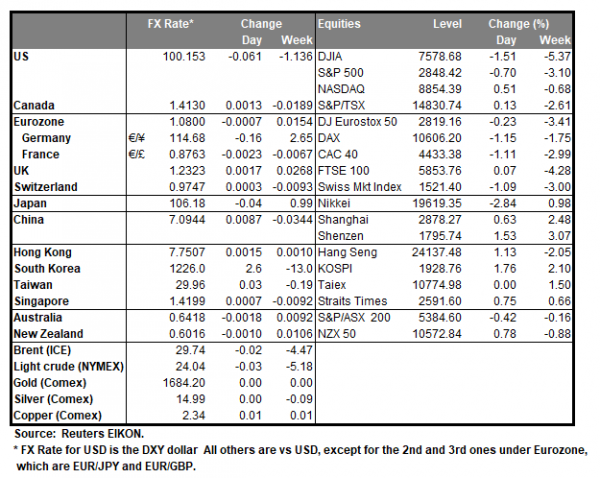 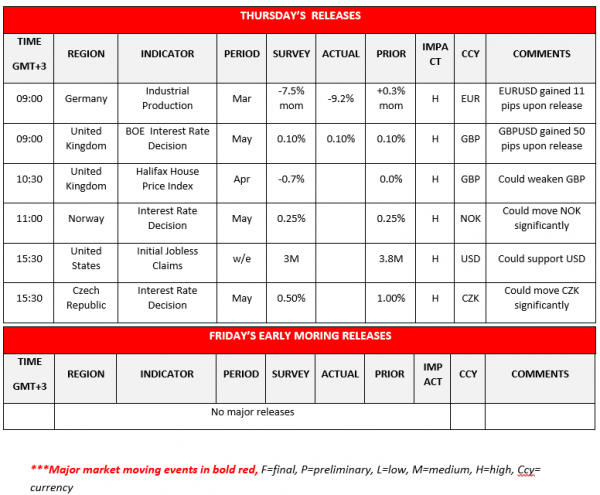