U.S. – The Economic Impact of COVID-19 On Full Display

Equity markets took it on the chin this week as last week’s optimism faded. Investors continue to digest the extent of the damage COVID-19 and social distancing protocols are having on the economy. At the time of writing, markets were down 3% from close last week.

The impact of COVID-19 was on full display in economic data released this week. Retail sales plummeted by 16.4%, a decline never seen before in the history of the series. The extraordinary drop took retail sales to 2012 levels in April, wiping out 8 years of gains (Chart 1). Closures of non-essential businesses all around the country coupled with price declines and mounting job losses explain the sharp drop in sales in the month.

With respect to prices, the consumer price index (CPI) showed prices in April fell by 0.8% month-on-month, the largest monthly decline since December 2008. While the collapse in gasoline prices (-20.6%) was the main driver, prices also retreated in areas most affected by COVID-19: motor vehicle insurance, airline fares, and apparel. Core CPI inflation was 1.4% in year-over-year terms, down from 2.1% in March.

Given all the economic turmoil, business sentiment also worsened as the NFIB small business optimism index fell by 5.5 points to 90.9 in April. Small businesses grew more pessimistic across nearly all sub-indices. Interestingly, however, there was a large increase in the percentage of firms expecting the economy to improve in the next six months (April: 29%; March: 5%), coinciding with the news that states are gradually re-opening their economies. But, gradual restarts of state economies do not mean economic activity will rapidly return to normal.

This was the sentiment expressed by Federal Reserve Chairman Jerome Powell in a speech on Thursday. Chairman Powell said words couldn’t describe the damage this has done to households, especially for those at the lower-end of the income spectrum. As we have written in an earlier report, the poorest households are bearing the biggest economic burden of COVID-19. Quoting results of a Fed survey released yesterday, Chairman Powell noted that almost 40% of households making less than $40,000 a year had a member lose a job in March.

The aforementioned Fed survey also included slivers of hope for a sturdier economic recovery. Nine in ten people who lost a job said that their employer indicated that they would return to their job at some point, indicating that programs such as the Paycheck Protection Program are working.

April might be the lowest point for the U.S. economy. A gradual relaxation of social distancing protocols should see activity improve. China, the country furthest ahead in the battle against COVID-19, saw industrial production and investment bounce back into positive territory for the first time this year in April (Chart 2). If this is any indication for the future path of the U.S. economy, a recovery is coming, hopefully sooner rather than later. 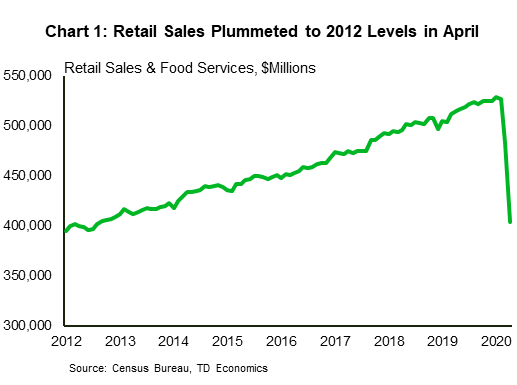 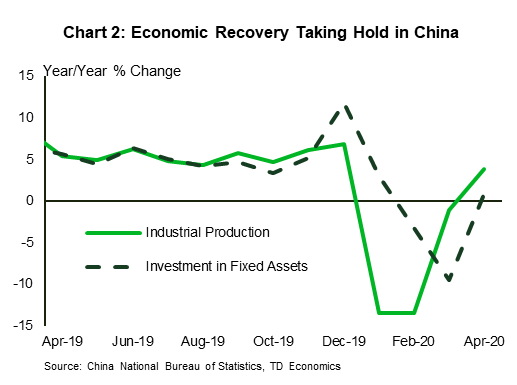 Canada – Housing In The Deep Freeze

Markets appeared set for a down week following marked declines on Tuesday and Wednesday. The S&P/TSX composite index had a decent rebound from its late March lows, but has been stuck around 20% below its earlier peak since late last month. The loonie has also been stuck around the 71 US cent mark, with no major catalysts emerging for either. Away from markets, the battle against the pandemic appears to be bearing fruit, with active cases falling on two days this week, the first declines since the start of the outbreak.

Signs of progress have led the provinces to begin their re-opening plans, and Ontario was the latest to join in this week. Premier Ford announced this week that beginning this coming Tuesday (May 19th), all construction can resume, and most stores with individual entrances (i.e. non-mall) can re-open with spacing measures in place. Ontarians also have a few more choices this weekend with golf courses, marinas, and campgrounds allowed to re-open May 16th. Like other provinces, Ontario is taking a phased approach, meaning that the economic recovery will look very different depending on where you work. We explored this further in a report this week that looked at so-called recovery “shapes” by industry – some may see a V, others, like air travel an L-shaped recovery, and most falling somewhere in between.

Moving from the outlook to the present, the April home sales data underscored the economic impact of the pandemic (See commentary). Sales last month were almost two-thirds lower than in February, at a level last seen in the 1980s. However, unlike a ‘typical’ recession, the drop was not driven only by buyers pulling out of the market, but also sellers (Chart 1). The unusual nature of the current episode is skewing the data. The average sale price fell 10% on the month, but this was largely due to composition, i.e. less sales at the high end of the market. The MLS Home Price Index, a ‘like for like’ measure, was down a more modest 0.6%, reflecting the sort-of stasis that housing markets entered last month.

April’s housing market stasis is in large part a reflection of pandemic response measures, as more than 700k mortgage holders used payment deferrals offered by financial institutions. This has limited forced selling that is typically associated with recessions. But, like pandemic response measures more broadly, deferrals have an expiry date. This implies a significant risk to housing markets later this year if there is only a slow recovery in employment. To this point, the Bank of Canada’s annual Financial System Review (FSR) reminded us that one in five mortgagors have less than two months’ payments equivalent saved (Chart 2). This will be stretched further by the pandemic, as noted in a report this week examining the impact of the pandemic on household finances.

Indeed, as noted following the release of the FSR, the Bank’s assessment of the financial system as resilient seems to hinge on two key factors: the policy response to date, both fiscal and monetary, and a modest resumption of economic activity from the summer on. Reopening plans support this view, which is consistent with our own. But the risks are clear – should we see more modest path forward, or a second wave of infections, the Canadian economy will need to stay on life support even longer to prevent financial risks from becoming realities. 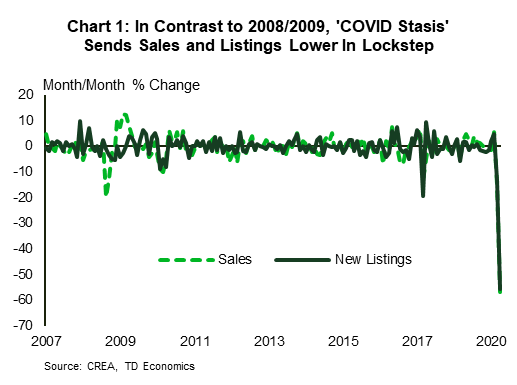 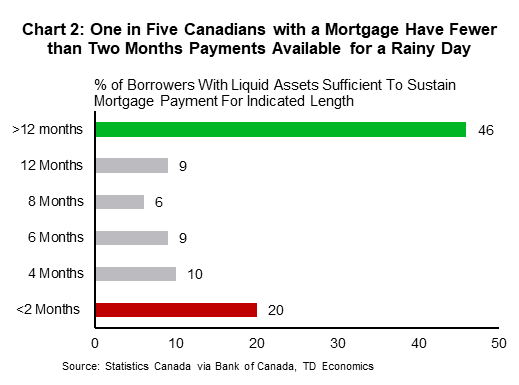 We look for CPI to post another 0.6% m/m decline in April, which would push headline CPI into deflationary territory, at -0.1% y/y, for the first time since 2009. Once again, energy prices will provide the main driving force for the month, with gasoline expected to post a similar drop to its 17% decline in March, while other energy products will also weigh on the headline. Food prices will provide a partial offset, helped by significant CAD depreciation, while several core components will be impacted by COVID-19. Among the most impacted categories we can expect to see are airfares, recreation and travel services, and apparel, among others. New home prices do not suggest any easing in homeowner replacement costs, which have the largest weight within the shelter component, but emergency measures may weigh on rents.

Core CPI measures should soften by less. We look for the BoC’s core measures to edge lower by 0.2pp on average to 1.6% y/y, while the ex food and energy index should soften to 1.4% y/y. While the return to a deflationary environment will not be welcomed by policymakers, we expect it should be fairly brief as easing lockdowns allow a return to a more inflationary environment this summer. 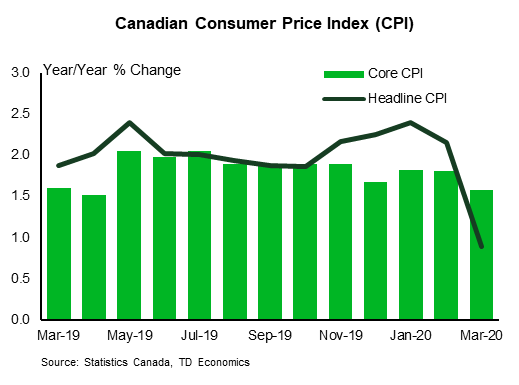 Retail sales will provide the next look at activity data for the month of March and based on early evidence, the results will be glum. We forecast retail sales to fall by 10.0% for their largest monthly decline on record (since 1991). This is bigger than the 8.3% drop in US retail activity, despite Canadian retail sales not including food services (these are captured in a separate survey). If they were included in the Canadian retail data we would be looking at an even sharper drop for the headline print. Motor vehicles should make the largest contribution to the decline, although gasoline stations will weigh heavily as well. New auto sales accounted for roughly 22% of retail sales in February and preliminary (unit) sales were down roughly 50% from February.

While we are fading some of this weakness, given the loose correlation between unit sales and retail data, this does introduce some downside risk to our forecast. Gasoline stations will suffer greatly from lower prices before accounting for far less driving, while higher grocery sales will provide a significant offset from stockpiling. The most pressing question will be to what extent increased online shopping offsets brick-and-mortar activity, and this will likely go unanswered given that Canadian e-commerce sales do not include foreign-based retailers. 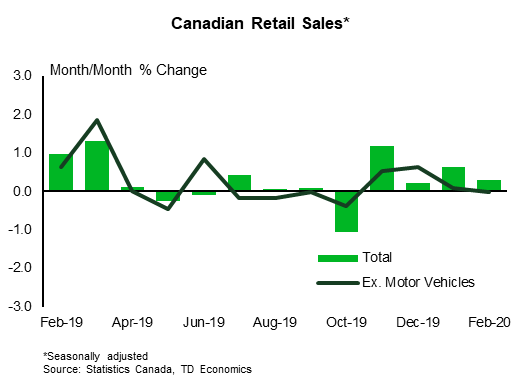 Fed Mester: There’s some leveling off in economic recovery

Clarida: Fed could do more with forward guidance and balance sheet