The USD seemed to remain steady against most of its counterparts on Friday and during today’s Asian session, as despite economies gradually continuing to reopen, worries about tensions in the US-Sino trade relationships seem to be increasing. It should be noted that the US retail sales dropped to a crashing -16.4% mom while industrial production also dropped deep into the negatives, both for April. However, as tensions between the US and China increase, we tend to worry also about commodity currencies especially the AUD, as the Australian economy has a substantial exposure to China. JPY on the other hand, seems to remain rangebound against the USD, as the country enters a recession this deep, for the first time since 2014, after the release of the GDP growth rate for Q1, which is in the negatives, yet improved if compared to Q4’s rate. USD/JPY maintained a sideways motion between the 106.60 (S1) support line and the 107.75 (R1) resistance line since Friday. We maintain our bias for a sideways motion currently, yet safe-haven flows could alter the pair’s direction. Should the pair come under the selling interest of the market we could see USD/JPY breaking the 106.60 (S1) line and aim for the 105.30 (S2) level. While should the pair’s long positions be favored by the market, we could see it breaking the 107.75 (R1) line and start aiming for the 109.10 (R2) level.

The biggest looser from the majors since Friday, would be the pound against the USD, as the specter of negative interest rates in the UK still looms over the pound along with Brexit worries as we analysed in previous reports. The statements from BoE’s chief economist on Saturday to the Telegraph would be characteristic as he stated that “The economy is weaker than a year ago and we are now at the effective lower bound, so in that sense it’s something we’ll need to look at – are looking at – with somewhat greater immediacy,”. We expect the BoE Governor’s comments before UK lawmakers on Wednesday, to gather substantial interest as more light could be shed over BoE’s intentions. As for Brexit, according to media both the UK and EU demanded that the other side give ground in talks on a new post-Brexit trade deal, which could be foreshadowing further tensions along the way. GBP/USD dropped on Friday, breaking clearly the 1.2200 (R1) support line, now turned to resistance. Albeit cable showing some signs of recovery during today’s Asian session, we maintain our bearish outlook, as the pair seems to be guided by the downward trendline incepted since the 8th of the month. Should GBP/USD continue to be guided from the bears, we could see it breaking the 1.2015 (S1) line and aim for the 1.1815 (S2) level. If the bulls take over we could see it breaking the 1.2200 (R1) line and aim for the 1.2400 (R2) level.

It’s expected to be a slow Monday today as no major financial releases are expected. However, during the Asian session tomorrow, we get New Zealand’s PPI inputs growth rate for Q1, while a bit later we get Japan’s revised industrial output growth rate for March. Also please bear in mind that RBA’s minutes are due out.

On Tuesday, UK’s employment data for March, Germany’s ZEW economic sentiment for May and the US construction data for April are to be released, while Fed’s Chair Powell and US Treasurer Mnuchin testify before US lawmakers. On Wednesday, we get from Japan the machinery orders growth rate for March, UK’s, Eurozone’s (final) and Canada’s CPI rates for April, while BoE’s governor Bailey speaks before UK lawmakers and FOMC’s minutes are to be released. On Thursday, we get Australia’s PMI’s for May, Japan’s trade data for April and preliminary manufacturing PMI for May, UK’s preliminary PMI’s for May, Turkey’s CBRT Interest rate decision, and the US initial jobless claims, Philly Fed Business index for May and the Markit preliminary PMI’s for May, while Fed’s Chair Powell speaks. On Friday, we get from Japan the CPI rates, UK’s retail sales, Europe’s main PMI readings for May, and from Canada we get the retail sales for March. 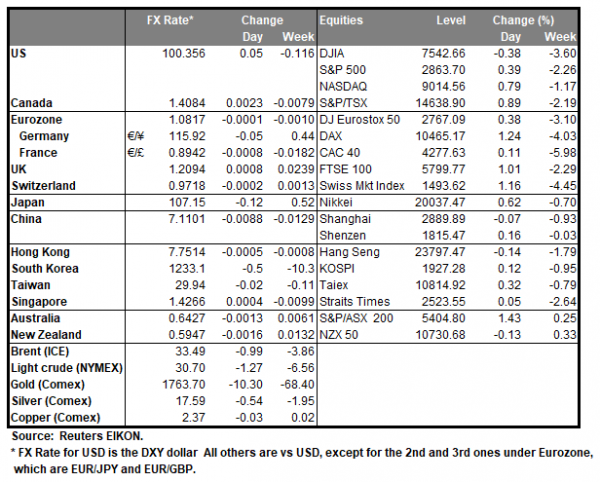 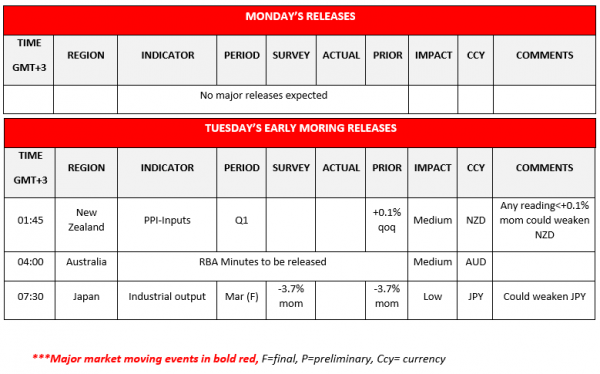