Canadian retail sales declined at a record pace in March when efforts to contain the spread of COVID-19 forced the closure of many non-essential businesses in the second half of the month. StatCan noted about 40% of retailers closed their doors in March. Record declines in 5 of 11 retail categories (auto dealers, gas stations, furniture stores, clothing retailers and sporting good & hobby stores) swamped a striking 25% increase in grocery store sales as consumers stocked up on necessities.

StatCan took the unusual step of releasing an advance estimate for April retail sales alongside today’s more official March reading. That showed a further 15.6% decline in sales in April when many retailers were closed for the full month. Our own consumer spending tracker , which also covers non-retail categories like restaurants, travel and entertainment, points to a similar 29% year-over-year decline in spending in April. There is some light at the end of the tunnel, though, as our data shows spending started to tick higher toward the end of April. That trend should continue in May, particularly now that some retailers are being allowed to re-open. But it will be a long road to recovery for many in the sector. Safety protocols will limit traffic through stores and consumers are likely to remain cautious due to both health and economic concerns.

Retailers can’t do much to make up for consumers’ lost incomes, but they have been managing health concerns and containment measures by increasing their online presence. E-commerce sales were up 40% year-over-year in March and represented a record 5% of total retail sales (based on our own seasonal adjustment). Expect that figure to rise further in April, as we saw in the US. It’s also worth remembering that StatCan’s e-commerce data understates the prevalence of online retail, as purchases from foreign e-commerce retailers aren’t captured (those sales would show up in consumer goods imports, which were flat in March—one of the few import categories that didn’t see a substantial decline). The long-term shift toward online shopping has been accelerated by the coronavirus pandemic, and is one of eight trends we see continuing to shape the economy even after the crisis begins to fade. 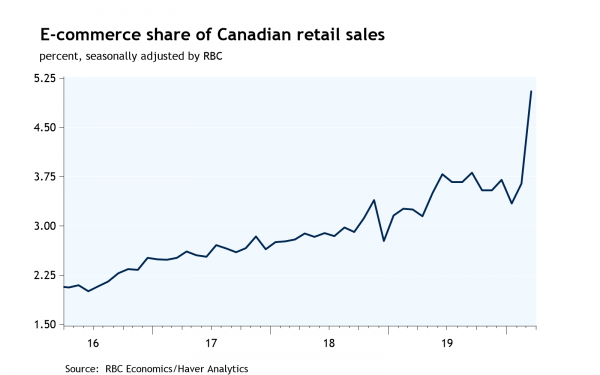 Subdued Trading With Japan and Singapore on Holiday, Dollar Yet to Confirm Rebound