Like most facets of the economy, COVID-19 has had a profound impact on consumer prices. April saw another sharp leg down, with CPI inflation falling 0.7% (m/m)1, bringing year/year CPI inflation to deflationary territory (-0.2%) for the first time since 2009. Unsurprisingly, a large chunk of the decline was led by gasoline and fuel prices, but weak and/or negative price changes were seen elsewhere too. This near-term downshift in inflation was to be expected given the unprecedented negative demand shock, but the economic impacts of COVID-19 are unlikely to be temporary. After many years of inflation predictably trending sideways, the unprecedented nature of the shock generates large uncertainty around the near- and longer-term path of inflation going forward.

For most of 2020, we expect that persistent economic slack, an elevated unemployment rate, and lackluster commodity prices will keep headline CPI inflation (year/year) significantly below the 1% mark (Chart 1). However, the implications of such a low near-term trajectory are less clear. For one, on the monetary policy front, the Bank of Canada is fully expecting it and has already taken numerous preemptive easing actions alongside the federal government to mitigate against deflationary risks2. Second, changing consumer spending patterns mean that the reported inflation rate, which is based on fixed expenditure weights from 20173, may no longer be representative. Indeed, items experiencing a surge in demand, like food, are now facing significant upward price pressures. 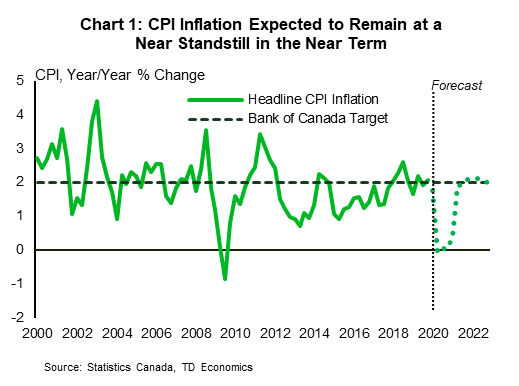 Next year, we anticipate inflation to gradually move back towards the central bank’s 2% target by year-end as the economic recovery gains some traction. However, this outlook is subject to heightened uncertainty. The combination of unprecedented expansions in central bank balance sheets, massive government deficits, and the potential for changes in global value chains could fuel an even sharper upturn over the next few years. To the downside, a slower-than-projected recovery could induce further disinflationary pressures.

In The Near Term, Disinflationary Forces Remain The Key Risk

With most of the demand and commodity price hits centered in April, the most significant shock to monthly inflation is now likely in the rear-view mirror. Oil prices, for one, have rebounded, and that should help to support near-term inflation metrics. Still, most prices are likely to remain in abeyance as stores reopen and some attempt to lure cost-conscious consumers with discounts. When compared with year-ago levels, inflation will bear the marks of the current episode for some time. This is especially likely to play out in underlying (i.e., core) inflation metrics that remained resilient in May at around 1.8%. So, while headline inflation may move roughly sideways, core measures are likely to come down. This speaks more to a disinflationary environment (i.e., positive but falling growth in prices) than one of outright price declines.

Forces driving this view include: 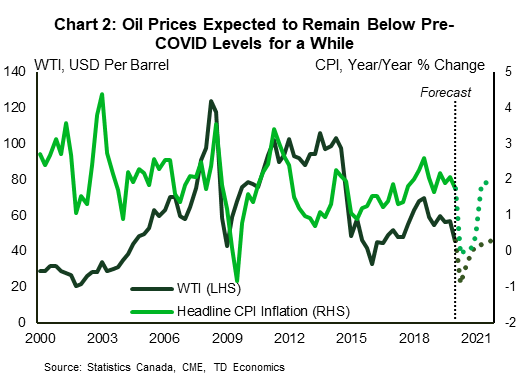 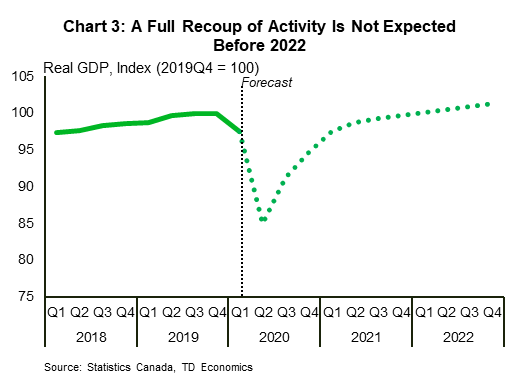 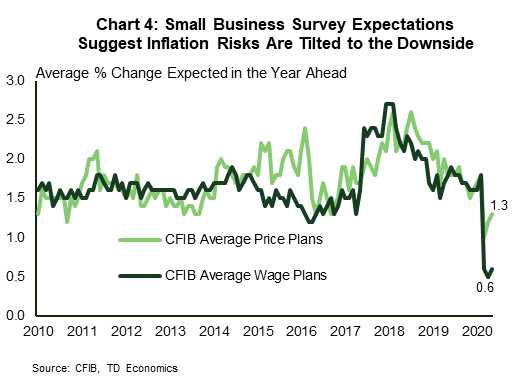 Despite the unambiguously disinflationary environment, it is important to take a step back and note the challenges associated with measurement and the representativeness of current measures. Statistics Canada has noted that data collection was impacted (conducted remotely online) and that calculation for several items was imputed given the lack of transactions6. This suggests that potential measurement error may be higher than average. More important, however, is the fact that weights assigned to each item are held constant at 2017 consumption levels. COVID-19 has changed consumption behavior, due to both – involuntary expenditure changes amidst government-mandated business closures, and an expected drop in discretionary spending due to the uncertain labour market backdrop. Transitory and modest changes to expenditure patterns can typically be ignored, but the unique nature of the COVID-19 shock means that such changes may become permanent. It remains uncertain whether (and for how long) these impacts will linger.

A useful first step would be to look at core inflation measures that exclude fuel prices, an item that has disproportionately contributed to March’s and April’s CPI decline. As noted, the Bank of Canada’s core inflation measures7 have remained surprisingly sturdy, with the three measures averaging 1.8%. Typically, the Bank of Canada uses these measures to look-through temporary volatility in headline CPI. However, a continuation of current trends may elongate the gap between core and headline inflation measures, prompting a potential re-think of expenditure baskets.

There is a lack of definitive and timely data on how consumption behaviour has responded to COVID-19, and this was one of the reasons cited by Statistics Canada for maintaining the current basket. With recent declines in prices centered across categories that are in substantially less demand due to both involuntary and discretionary reasons (Chart 5), one can confidently assert that price pressures were higher than the headline figures suggest. March’s retail sales data (Chart 6) can be useful as a gauge for preliminary impacts on consumption, but retail sales are only a small part of overall consumer spending. Our approximate “guesstimate” is that headline inflation is now likely closer to the 1% mark8. 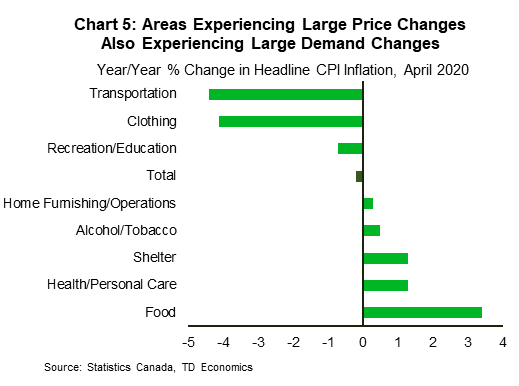 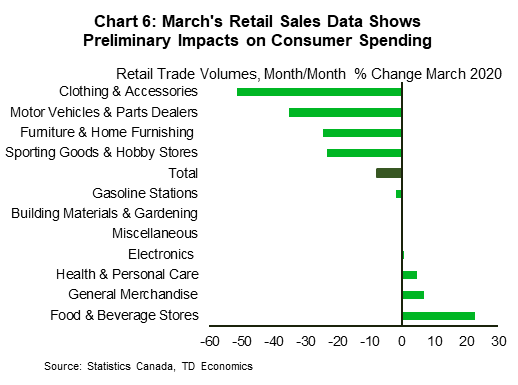 The outlook becomes more complicated in the long term, given the degree of uncertainty related to the path of the economic recovery and the timing of the output gap closure. To the downside, a slower-than-expected recovery (i.e., L-shaped) would elongate current disinflationary pressures. Meanwhile, the COVID-19 shock also adds new forces to the inflation equation in Canada and globally that were largely absent in the past few decades. These new forces tilt the risks to the upside, and include expanded central balance sheets (Chart 7) due to quantitative easing, unprecedented government stimulus and a spike in net debt/GDP ratios, and potential changes to global supply chains. 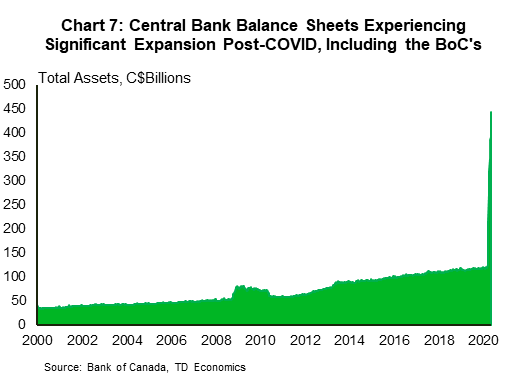 On the fiscal side, the expanded borrowing by governments is largely flowing through to “bridge” support payments to vulnerable households and individuals, and to a lesser extent, business. These are meant as a temporary backstop, akin more to filling a hole than providing an expansionary boost to demand.

On the monetary policy front, lowering the overnight rate to the effective lower bound (0.25%) was needed to prevent the more pressing near term danger of lingering deflation. For now, the impacts of the Bank of Canada’s large-scale asset purchases can largely be seen in stabilizing bond yields and credit spreads. Indeed, the aim of these purchases is exactly that – to support liquidity and prevent borrowing rates from spiking amid the uncertainrisk-off environment. Past QE experiences in the U.S., Japan, and the Eurozone have not resulted in any noticeable inflation response (although they may have had other unintended consequences that are beyond the scope of this note). However, the current scale is more significant than that seen in past episodes. Also, unwinding these policies has at times proven a difficult task9. Cross-country comparisons should also be treated with caution given each country’s unique currency and current account position.

Globally, there are also concerns around debt monetiziation as government stimulus coincides with large-scale asset purchases (see our recent report on debt monetization globally)10. On this note, the Bank of Canada has recently provided reassurances and emphasized the importance of central bank independence and its commitment to inflation-targeting. However, if debt monetization where to happen elsewhere, it could present upside risks to global inflation which could potentially be imported into Canada.

Finally, the current experience, even for countries that have implemented QE before, comes against potential supply shocks both domestically and globally. As noted in a recent Bank of Canada speech, negative hits to supply tend to drive inflation higher. This risk has increased in the past three years as deglobalization and protectionism became more prevalent. COVID-19 may accelerate this move as lockdown measures disrupt supply chains and labour mobility, and create logistical challenges. We may already be witnessing a mild version of this with the recent increases in food prices.

From a policy perspective, central banks are likely to accommodate some temporary overshoot of inflation as they focus on ensuring a smooth economic and labour market recovery from this unprecedented slump. That said, the Bank of Canada has reassured markets that they have the tools required and will act to respond to any evolving persistence in price pressures.

After a decade of relative price stability and well-anchored inflation, COVID-19 came along and tore up the inflation picture both globally and in Canada. In the near term (2020), we believe that the sizeable hit to demand and commodity prices will keep inflation subdued in the 0-1% range. However, this disinflationary environment may mask some notable upward price pressures associated with changing consumer spending patterns. Inflation is expected to gradually return to its 2% anchor by late 2021, predicated on a “U-shaped” recovery. However, given the unprecedented macroeconomic environment, this outlook is subject to a range of uncertainties, including an uncertain economic recovery path, record stimulus, and potential supply-side adjustments.