It was more of the same this morning with stocks extending their gains across Europe and US index futures added to theirs amid easing of lockdown measures and ongoing central bank support. In FX, the dollar bounced back a little bit, before turning lower again as the euro jumped on EU coronavirus recue fund headlines. The greenback was likely to remain under pressure anyway given the ongoing “risk-on” trade reducing the appeal of the reserve currency. That said, traders will need to be wary of being caught off guard as the US-China situation could escalate further and undermine risk appetite.

European investors will be keen to find out what sort of a stimulus package the European Union will announce for the region’s recovery efforts. The European Commission is expected to present its proposal for a bailout package later this afternoon. France and Germany have called for a €500 billion recovery fund that would consist of grants, but this has been opposed by nations such as Austria, Sweden, Denmark and the Netherlands, who prefer the fund to consist of only loans.

European investors would welcome any help authorities will make available, given the economic situation the bloc is in at the moment. Unconfirmed reports this morning suggested the European Commission will propose €750 billion in virus recovery fund – €500bn of which will be grants and the remaining €250bn loans. In reaction to this headline, EU stocks and the single currency popped higher.

Gold down but not out

Thanks to the ongoing risk-on trade, safe-haven gold has fallen out of favour over the past few weeks. But with the dollar effectively tuning into a funding currency and global central banks printing money at full throttle, the long-term outlook on gold remains bullish. In fact, it was possible gold would defend the $1700 level again, which would limit the downside.

However, not all markets are pointing to risk-on. Specifically, it may be worth watching the Chinese yuan closely, which has fallen further mainly due to the escalating tensions in Hong Kong and deteriorating US-China relations. Trump has said he will make an announcement on China in response to its action in Hong Kong by the end of this week. This could potentially by the trigger for risk-off. So, traders need to remain nimble in this market environment. The yuan has also weakened because of speculation China could unveil more stimulus, so it is not all because of the US and Hong Kong situations. Still, if the weakness continues then this will give Trump more reason to impose fresh tariffs on China, which could weigh on risk sentiment. So, watch the USD/CNH closely. 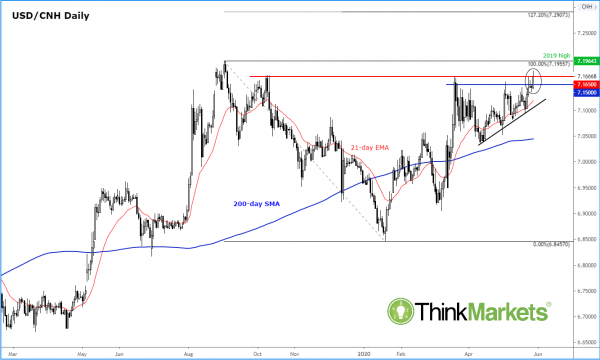