There’s been a lot of talk for a powerful V-shaped recovery, but that has only happened in the stock market, which is ignoring the rising economic and geopolitical risks and is instead plowing higher, powered by a tsunami of stimulus. Alas, at current levels equities imply a ‘painless’ recession, which is probably much too rosy. Overall, so much optimism has been priced back in, that it would almost take a miracle for reality to match the stellar expectations.

There is no alternative

Global markets came roaring back to life in recent weeks, thanks to a tidal wave of stimulus from governments and central banks. The S&P 500 is down just 7% for the year, while the tech-heavy Nasdaq 100 is actually 7.5% higher year-to-date and is back within breathing distance of its record highs. All this despite an avalanche of horrifying economic data and unemployment soaring, leading many to question why the stock market seems so disconnected from reality.

There are a few reasons, but none more important than central banks. Monetary policymakers reacted so aggressively to this crisis, cutting interest rates to zero and launching massive bond-buying programs, that they’ve almost made bonds uninvestable. Bonds are the largest asset class by far and every ‘institutional’ portfolio has them, so when real yields (inflation adjusted) fall below zero like now, fund managers looking for a decent return are forced into riskier bets. All that’s really left is stocks, as commodity markets are too small. 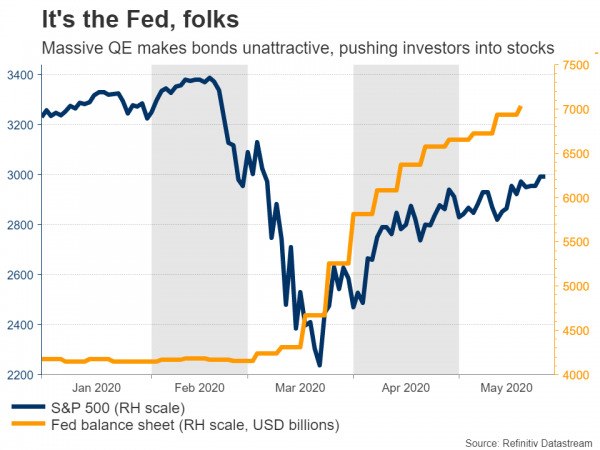 To be sure, the revolutionary response from governments also calmed investors down, as it became clear that politicians would not allow this shock to evolve into a depression by not acting.

It’s a retail and tech thing

Beyond the stimulus, this stay-at-home crisis attracted some unusual participants to the party: retail investors. Trading the markets seems to have replaced sports betting or gambling for many people, as most public brokers have reported a huge surge in their account openings and stock trading volumes, so much of the buying spree in equities may have come from regular people, not ‘sophisticated’ funds.

Historically, that usually ends badly. We got a small taste of why when oil prices turned negative, because some traders didn’t fully understand the contracts they were buying.

Finally, the ‘stock market’ hasn’t recovered, only a handful of giant tech names have – Microsoft, Apple, Amazon, Google, and Facebook. These titans share similar characteristics: they can boost revenue even when people stay home due to their online business models, they have clean balance sheets that will help them weather this crisis, and some – like Amazon – might even expand their industry dominance as smaller competitors close down. 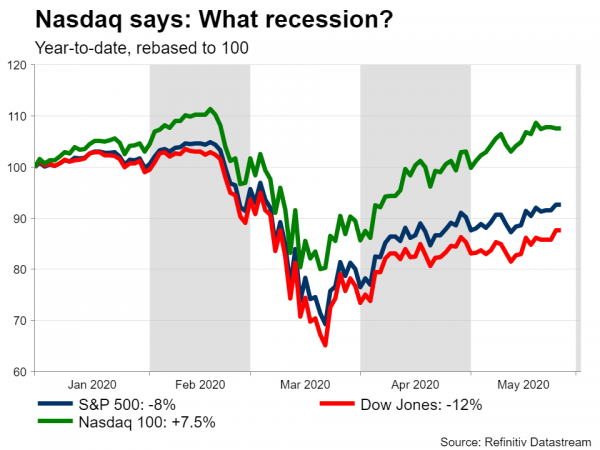 These 5 biggest companies on the S&P 500 now account for more than 20% of the entire index in terms of market cap, which is the highest ever, and most of them are now priced for perfection. Alas, this ‘top heavy’ market implies increased fragility going forward. If these giants start selling off for any reason, they will drag the entire S&P down. This concentration also explains why the tech-heavy Nasdaq has outperformed so dramatically.

Admittedly, it’s difficult to be optimistic from here, as so much good news is already in the price and there’s a myriad of risks that could derail the cheerful mood.

For starters, markets are likely underplaying the lasting impact that double-digit unemployment will have on consumption. Just in April, the US economy lost every job it created over the entire past decade, and May’s numbers could be just as bad. Sure, some of those will come back quickly, but if the unemployment rate hits 20% in May and then declines towards 10%, is that really a victory?

Then there’s also the risk of second waves, both of virus infections and bankruptcies. If new virus cases flare up again now that most economies have reopened, that could force a return to lockdowns or at least a longer period of mandatory social distancing measures. That matters because if you are a restaurant for example and you can only operate at 50% capacity for many months, then your revenues are also cut in half. 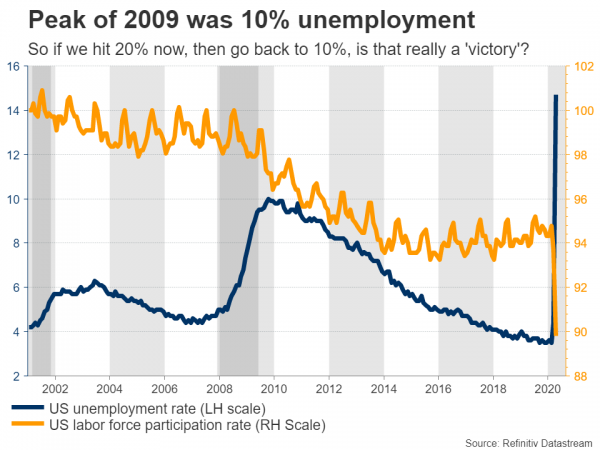 Meanwhile, there’s the potential damage to consumer psychology. How long until people feel safe going back to packed places like malls and cinemas? That might be especially true for more vulnerable segments of the population, like the elderly.

Geopolitics are huge as well. The US and China are at each other’s throats, with Washington blaming China for the pandemic and Beijing wanting the US to stay out of its affairs in Hong Kong, to name a couple of issues. So far it’s mostly rhetoric, but that might change soon as the White House is about to unveil sanctions against China’s new measures in Hong Kong.

While those sanctions might be mostly symbolic, tensions are likely to flare up further heading into November’s US election. It’s now clear that Trump’s election strategy is to blame Beijing for the pandemic, and Congress is fully behind him on China matters.

And finally, there’s the stimulus angle. Central banks went ‘all in’ back in March and so did governments, but lately Congress seems to have moved to ‘hold’ as most Republican Senators think they’ve done enough for now. It’s an election year after all so neither party wants to hand a ‘victory’ to the opposition, which means it could be some time before another rescue package comes, if at all.

But a vaccine could change everything

On positive side, the biggest upside risk for markets from here would be a medical breakthrough. While this is probably a longer-term story, if there are credible news of a vaccine or at least an effective treatment, that could lead many previously bearish investors to jump on the bullish bandwagon too.

Remember, if retail investors are truly powering this rally, then a lot of the ‘smart money’ is sitting on the sidelines, waiting for the next shoe to drop. 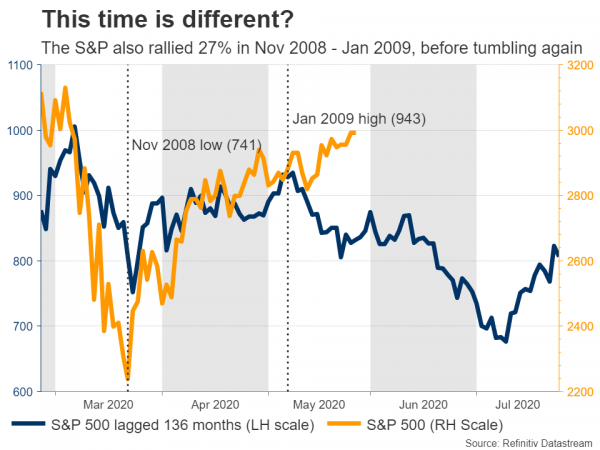 There’s also the upside risk of stronger economic data. Sure markets ignored the scary data on the way down, but once the numbers start to improve from current depressed levels, investors may begin to react positively to those, as weird as that sounds.

Too far, too fast?

All told, it’s a difficult outlook to navigate. On the one hand, it’s logical that investors will pile into stocks, especially higher quality ones, if bonds are suddenly not attractive at all. On the other hand, that doesn’t really justify stocks trading at such rich valuations, as so many things can go wrong from here.

It might be a classic case of stocks running too far and too fast ahead of fundamentals. The long-term outlook is definitely positive, but in the meantime, it will be difficult for equities that are ‘priced for perfection’ to live up to expectations. The risk of a correction looks elevated.

Dollar Edges Up, Stocks Slip As Recovery Doubts Set In