The precious metal has been trading side-ways over the past several weeks, with investors choosing to focus more on the racier equity markets. So, the safe-haven precious metal has been unable to build on its impressive rally in March. But it hasn’t exactly sold off either, holding comfortably above the $1700 support area thus far.

Despite its recent weakness, gold’s positive fundamental outlook has not changed much. With interest rates likely to remain at their current low levels and QE at full throttle for the foreseeable future, gold and silver will likely remain appealing to investors as yields remain suppressed. What’s more, the US dollar has been falling over the past few weeks and if the that trend continues then this should be good news for dollar-denominated precious metals. There is also an element of haven buying which could contribute to factors supporting the metals, as concerns grow about equity market valuations again given the recent upsurge, especially on Wall Street. Equities have rallied despite growing concerns that the global economy will take a long time to rebound, and in spite of rising tensions between the US and China.

Meanwhile from a technical point of view, gold has managed to hold THIS key $1699-$1700 support range again: 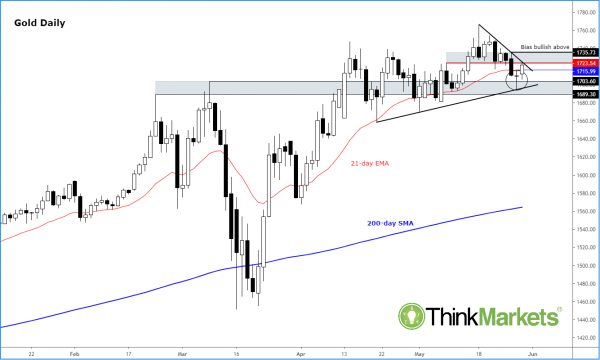 For as long as we hold above this range, the bulls should remain happy while a close below would sharply increase the risk for a proper sell-off would increase, especially if the metal then goes on to break below its most recent low at $1670. .

However, for now, the above key support is holding and with gold going back above last week’s low at $1717, the more likely scenario is that we could now see a short squeeze rally (given that there hasn’t been any immediate follow through despite last week’s bearish close). The trigger could be if gold now goes on to break above the next short-term resistance in the $1724-36 range. A break above here would take gold beyond the short-term bearish trend line as well.

That said, the key short-term risk facing gold is that the dollar may rebound sharply, potentially in response to today’s US macro data release, which could undermine the metal’s rally. Even so, this wouldn’t materially change the longer-term outlook on gold, which continues to be bullish as stated above.