The dollar is going down, and it is bullish for the markets. The two most closely monitored instruments of the world markets, EURUSD and S&P500, signal a breakthrough of their downtrends.

The dollar not only declines against the euro but also retreats against the pound and the yen. Nevertheless, the single currency deserves the most interest in this trio. It managed to overcome the boundary of 1.1000. It was indicative that the sellers in the pair tried to get it back below the psychologically important mark, but surrendered. This morning EURUSD is already one step away from 1.1100 on the last trading day of the month. 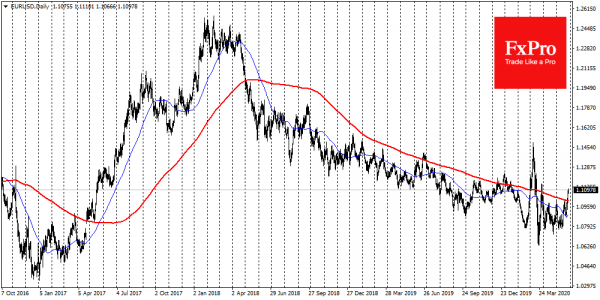 Closing the week and month above the 200-day average and significant round mark will allow us to speak about a technical break of the downtrend formed in early 2018. And it is interesting because the fundamental reasons for this downtrend remain valid.

Initially, the euro declined on the first signs of trade wars between the United States and China, as it was a harbinger of the weakening of European growth. In recent weeks the problems between the US and China are gaining strength again, and the yuan is losing ground. All this on top of Europe’s own problems with the economy.

However, it seems that the euro has nowhere to fall. It is now quite low by historical standards, that means the absence of sellers. Moreover, it receives support from the SNB, which is selling francs for the euro.

The S&P 500 closed yesterday with a 0.2% decline, but remained above its 200-day average and demonstrated growth during the previous four trading sessions. Formally, one can find reasons to buy the stocks, such as a decrease in continuing claims and a less sharp slump of durable goods orders than expected. Again, these are more technical and short-term reasons to buy than fundamental motives for an optimistic view of the future. 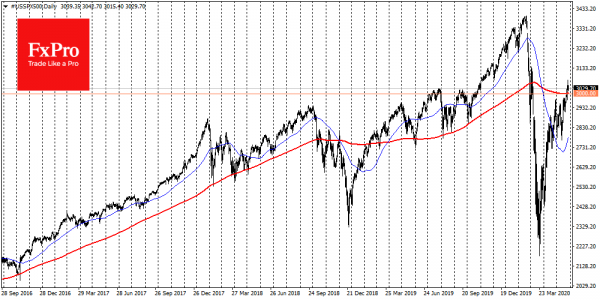 Thus, markets are generating very volatile growth based on technical factors and short-term impulses, but without taking into account the fundamental weakness of the economy and the high risks of widening disputes between China and the United States. This is a very fragile structure that could collapse at any moment.

US initial jobless claims rose 4k to 870k, above expectation