After managing to hold the key support area around $1700 on Wednesday, gold has managed to a climb higher over the past couple of days. The precious metal has been boosted by several factors. First, because of a falling US dollar, with the Dollar Index breaking below its 200-day average thanks to a corresponding rally for the euro which in turn has been boosted as European countries ease lockdown measures. The greenback has also fallen as investors have favoured riskier currencies of late, tracking the recent stock market rally. In addition, the rising US-China rift, which has deepened over moves by Beijing to impose a security law on Hong Kong, has further boosted the appeal of the haven metal. It will be interesting to see how the markets will react when Donald Trump, who has vowed a tough US response, delivers a news conference on China later today. Ahead of Trump’s expected conference, investor sentiment is evidently cautious with gold rising, stocks down a touch and the risk-sensitive USD/JPY lower. If tough sanctions are announced then gold could rise sharply amid haven flows, while if it turns out to be a damp squib of an event then we may not see such a strong move in the precious metal. Regardless, the long-term outlook on gold remains positive thanks to falling interest rates and the recent introduction of more QE in response to the economic costs of Covid-19.

At the time of writing, gold was hitting fresh highs on the day, threatening to break out from THIS bull flag pattern: 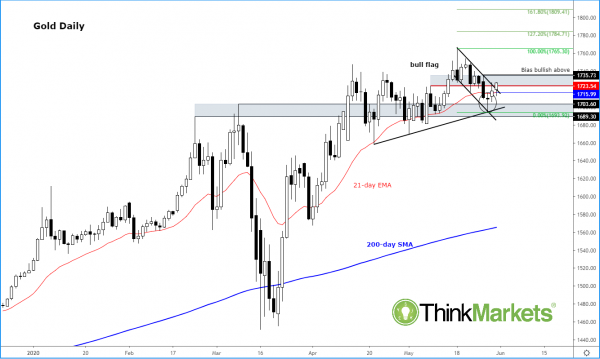 If the metal breaks and holds above this flag pattern, then the next logical target for the bulls would be the liquidity above the recent high at $1765. Thereafter, we have the Fibonacci extension levels at 1784 (127.2%) and 1809 (161.8%), with the latter coming in just ahead of the next big psychological level of $1800.

However, if the breakout fails, and gold goes back below $1700, then this would invalidate the short-term bullish bias. Consequently, it could lead to a squeeze on the longs, potentially resulting in a sharp drop.