This week, oil may return to investors’ focus, on par with the U.S. labour market. This data promises to shed light on how active the real recovery in consumer demand is in the United States and across the world. The available data do not allow us to dismiss the sense of anxiety. 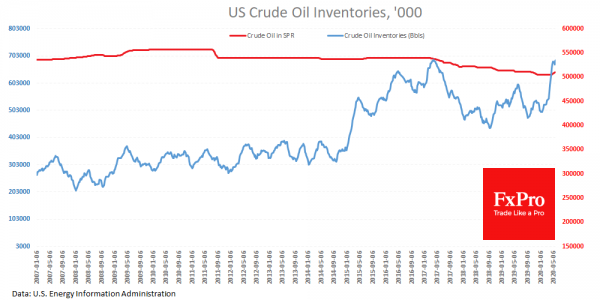 Brent and WTI have returned to their mid-March levels at last month’s close and are rising cautiously at the start of trading on Monday. Brent is trading close to $38, and WTI overcame $35.

The stock indices rally at the end of the month on Friday was a bullish signal for participants and supported oil purchases. In addition, it was backed by weekly data, which showed a further decline in drilling activity in the U.S.A. In recent years, these figures correlated quite closely with the price of a barrel – but not this time. The price collapse earlier this year was so sharp that oil producers could not keep up with the correction. This was also the case in 2015-2016 when the number of rigs reached its lowest point three months after the price lows.

Separately, the demand for oil products remained very strong as the economy continued to grow. In the previous months, the market decreased by 20-40%, depending on the category of raw materials. Despite the historically low number of working American rigs (only 301, including 222 oil-producing), the demand shock of the previous months may well cause an even deeper and longer decline.

Also, it is worth paying attention to the new jump in crude stockpiles last week by eight mln barrels, despite the expected recovery in demand. At the same time, production continues to decline after reaching 11.4 mln barrels per day.

Later this week, on June 4, a new OPEC+ meeting is expected. It is likely to discuss the possibility of extending the current tight limits for another two months as demand recovers weaker than expected. 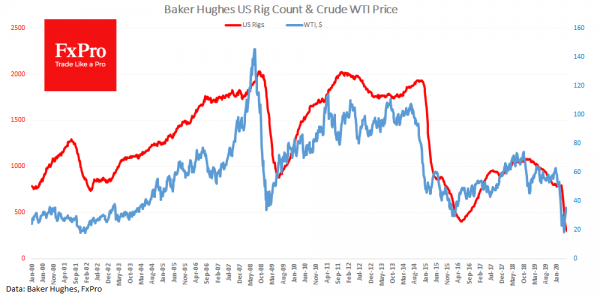 Russia has agreed to participate in these discussions, but its position is not yet clear. Saudi Arabia continues its policy of high oil prices. Russia is likely to support the cut proposals, observing sluggish demand for energy in Europe and and the recovery in China which was not as fast as expected. At the same time, there may well be hints of readiness to increase production. Alternatively, the parties may stick to the previous agreement in the struggle for market share.

Current oil prices are close to the balance figures for the budget. With impressive reserves and a very calm background on financial markets, it is reasonable to expect Russia to announce that these levels won’t be harmful to the economy locally – and are compatible with the strategic goal.

However, this approach may prove to be a mistake, as an April-like oil collapse could destabilize global markets and drag them into the red zone.