We have now entered the blackout period during which Fed policymakers refrain from public comment ahead of the next Federal Open Market Committee (FOMC) meeting on June 10. The FOMC has responded quickly throughout this crisis and has not stood on ceremony waiting for a scheduled meeting to introduce new policy tools. The FOMC cancelled the meeting initially scheduled for March 18 after working through the prior weekend and rolling out on March 15 a comprehensive new set of policy tools and measures to promote liquidity and quell the volatility that was gripping financial markets at the time. The primary takeaway from the next regularly scheduled meeting on April 29 was a pledge by the FOMC to “use its tools and act as appropriate to support the economy,” though it did not introduce any major new tools or liquidity programs.

One deliverable that we should be able to count on at the June meeting is the return of the Summary of Economic Projections (SEP). At the height of uncertainty in March, the Federal Reserve signaled it was more focused on bringing order and liquidity to financial markets than it was in forecasting what Chair Powell described at the time as “just not something that’s knowable” in reference to the economic projections. As we describe in this report, we suspect that may open the door to implicit forward guidance, a tool heralded by policymakers before the current crisis as a primary mechanism for influencing policy. Policy tools that are unlikely to play an important role at the June 10 meeting include negative interest rates, yield curve control and adjustments to the interest the Fed pays banks on excess reserves (IOER).

Negative Rates Not on the Table in June

We have long argued against the likelihood of negative interest rates as a tool for U.S. monetary policy. Still, futures markets have at times in recent weeks signaled a greater than zero probability for negative rates in the United States. During a videoconference on May 13 for the Peterson Institute, Chair Powell threw cold water on the notion, saying flatly that the “committee’s view on negative rates has not changed. This is not something we’re looking at.”

If we got to a point where it was clear the virus was under control, but U.S. demand was simply not materializing, then at that point a more serious deliberation of the case for and against negative rates might be merited; however, at this stage negative rates simply do not appear to be on the list of policy tools being seriously considered by the FOMC. As such, we believe any mention at the June 10 meeting would be to reiterate that negative rates are not on the table at this time.

Forward Guidance: Outcome-Based, Time-Based, or Just Use the Dots?

If the FOMC does not view negative rates as a viable tool at this point in time, an alternative form of stimulus could be to provide forward guidance that rates are unlikely to rise for an extended period of time. This forward guidance could take the form of an outcome-based approach, where policymakers promise not to raise the fed funds rate until a macroeconomic objective is met, such as the unemployment rate falling to a certain level. Alternatively, forward guidance could be timebased, with policymakers agreeing not to raise the fed funds rate until at least a specific amount of time had passed. The major benefit of forward guidance is that it signals to financial market participants that short-term interest rates will not increase until a certain objective has been met/time period has elapsed. This in turn helps keep a lid on intermediate and, to a lesser extent, longer-term interest rates.

But just how beneficial would forward guidance be at this point in time? Back in 2009 when the economy was bottoming out and the fed funds rate was at zero, markets had begun to price in rate hikes over the next few years (Figure 1). In that environment, effective forward guidance could help reign in those expectations and, by extension, Treasury yields. At present, overnight index swap (OIS) rates suggest that markets do not expect the fed funds rate to increase from current levels for years to come. Is the FOMC ready to commit today to keeping the fed funds rate at zero until the second half of the 2020s? Similarly, with economic data the most volatile they have been in modern times, is now the time to tie monetary policy to a specific macroeconomic indicator? 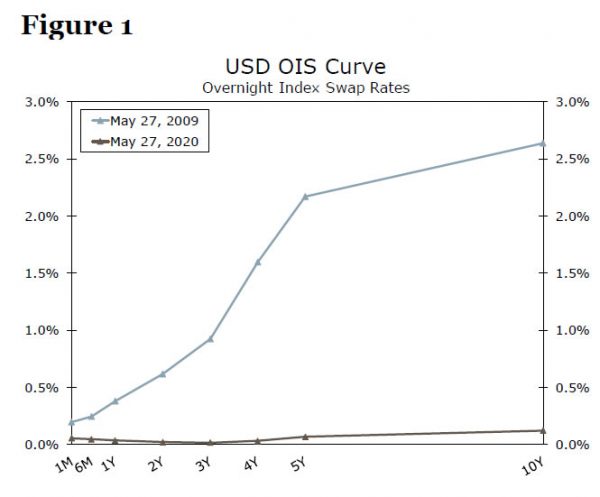 In our view, there may be a third way. The June 10 meeting likely will include the first update to the SEP since December. The dots from December obviously need to be thrown out the window given how much has subsequently changed (Figure 2). Rather than provide explicit forward guidance, committee members could implicitly signal that the fed funds rate is unlikely to increase through at least 2022 through changes in the dot plot. While the market reaction from such a move would likely be relatively small given that this appears to be the market’s base case scenario, it would at least reinforce the idea. Perhaps more important will be any changes to the longer-run dot. It will be here, as well as in the Fed’s projections for real GDP growth over the longer-run, where committee members will need to take a view on to what extent the COVID-19 shock has temporary versus permanent ramifications. If the median projection for the longer-run fed funds rate falls precipitously (>50bps in our view), this could be a more material form of forward guidance. 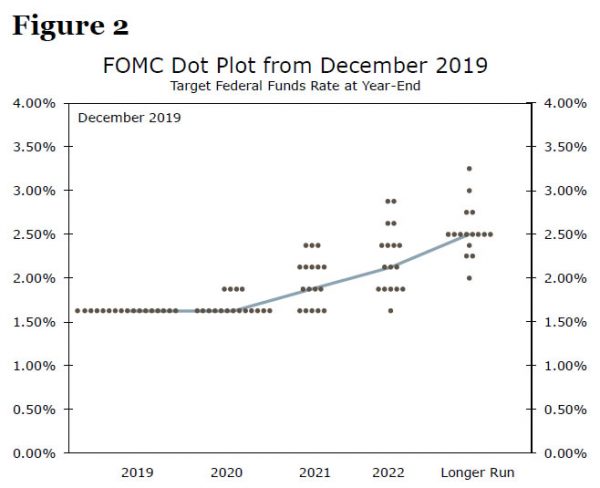 Yield Curve Control Being Debated, but Unlikely in June

We do not think the Fed will implement any form of explicit yield curve control on June 10. Front end rates have remained anchored, with the 2y yield at just 16 bps, and the curve is upward sloping with the 10y yield at 65 bps. In our view, the current conditions do not signal an immediate need for the FOMC to implement an explicit yield target at any point on the curve. The Federal Reserve is still working to get all of its previously-announced facilities fully operational. We think the committee may want to allow some time for all of these facilities to help the flow of credit to households, businesses and state & local governments before considering yield curve control. Just the existence of several of the Fed’s emergency facilities seem to have opened credit markets back up to a wide range of borrowers. Given where Treasury yields are at this time, we see little room for yield curve control to materially improve the provision of credit to the broader economy, perhaps the Fed’s marquee goal in navigating the current crisis. This is predicated on the view that states continue to gradually reopen and we do not have another full blown shutdown.

Instead of implementing an explicit target on a certain part of the yield curve, the Federal Reserve could tailor its asset purchases to achieve its goal, if necessary. Since March 13, the Fed has purchased $1.59 trillion in Treasury securities, with essentially all of the purchases in notes and bonds. Purchases have been somewhat consistent with the Fed’s policy that “purchases will eventually be conducted roughly in line with the composition of Treasury securities outstanding.” One key difference, however, is that the Federal Reserve has not been buying Treasury bills. So, while the goal is to purchase Treasury securities across the curve, the Fed clearly has no problem deviating from that in order to meet its objectives.

For example, if the 10y yield were to rise too rapidly, the Federal Reserve could simply shift its purchases to heavily favor that part of the curve. This could be done without much fanfare in the NY Fed’s release each Friday afternoon of its purchase schedule for the following week. In our view, shifting the composition of its purchases, plus the use of forward guidance we mentioned previously, would likely accomplish the Fed’s goal of keeping rates in check without the need for explicit yield curve control. 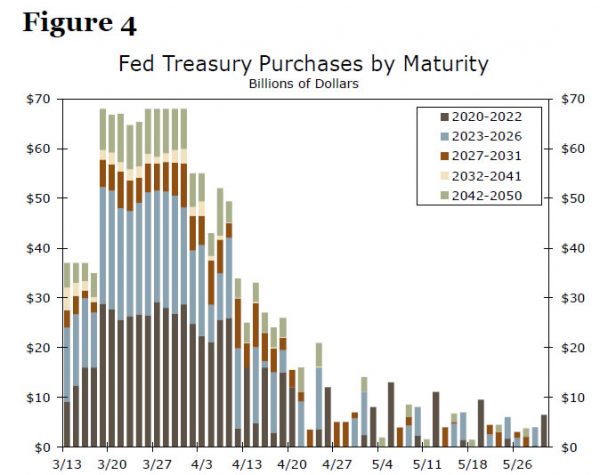 The latest communication from a Fed policymaker on the topic of yield curve control came just last week by NY Fed President John Williams. In a TV interview, he noted the Fed is “thinking very hard” about yield curve control. This was rather firm language from the NY Fed president, but we are not ready to call yield curve control a done deal. Given the scope of the economic and financial fallout from the coronavirus, we think the Federal Reserve is probably considering and researching all kinds of monetary policy tools. Our take is that his comments further support the notion that the Fed is willing to do everything in its power to help build a bridge to the other side of the crisis and less a nod to the fact that yield curve control is imminent.

We do not expect asset purchases to be addressed directly in any of the released documents following the June FOMC meeting. We expect the Fed will continue reducing the pace of asset purchases on a weekly basis, as it has done in each of the past 5 weeks. We had previously estimated that the Fed’s Treasury purchases would tally up to $1 trillion in Q2 and $300 billion in H2-2020. Based on the pace and consistency of weekly reductions, the risks to both of those figures are to the downside. If Treasury market liquidity were to dry up, we have no doubt the Federal Reserve would increase purchases quickly as needed. We have not seen any indications that such measures are necessary given the current environment.

An adjustment to IOER seems to be off the table for the time being. The April FOMC minutes noted that “there appeared to be limited risk that the federal funds rate would move below the target range.” The reason for this is because the dominant lenders in the fed funds market—the Federal Home Loan Banks (FHLBs)—have accounts at the Fed. While the FHLBs are not eligible to earn IOER, the FOMC seems comfortable with the fact that instead of lending in the fed funds market at a negative rate the FHLBs would simply leave the cash in their account at the Federal Reserve, effectively flooring the fed funds market at zero.

The minutes went on to note, “Moreover, there were few signs to date that the low level of overnight funding rates had adversely affected market functioning, and trading volumes remained robust.” Overall, the message seems loud and clear that the FOMC does not see the need to adjust IOER given current market conditions.