Keep an eye trained on the United States next week for an early sense of how Canada’s crucial manufacturing and retail sectors might have fared in May.

Canadian retail trends stuck close to those that played out in the US through April, suggesting an expected 10% increase in US sales in May could foretell similar improvements here. What’s more, RBC’s COVID consumer spending tracker saw Canadian spending pick up in the second half of April through May, as some retailers reopened their doors. And industry reports suggest that unit auto sales doubled exceptionally low April levels.

Along the same lines, we expect industrial production south of the border edged up by 2% in May following a record 11.2% drop in April—offering another signal for where Canada’s factories may be headed.

Here at home, this week’s StatCan releases will likely confirm what’s already known: that both sectors were badly battered in March and April. The agency already gave an advance estimate for April’s retail sales, pointing to a 15.6% decline on top of March’s 10% drop. Given that early projection was roughly in line with our consumer spending tracker—which showed a slump in personal card spending of 29% from a year earlier—we don’t expect the full report to hold many surprises. Autos, apparel and home furnishings will have continued to underperform, online sales extended their rise, and grocery store sales stayed strong.

Unlike retail, StatCan gave no early estimates for manufacturing sales in April—but we’re pencilling in a 20% decline in next week’s report. Auto production ground to an abrupt halt in the month and that alone will account for about half the drop. The rest will come from a broadly-based weakness in the sector—as we saw in the US, where all 19 manufacturing sub-industries posted declines in April. 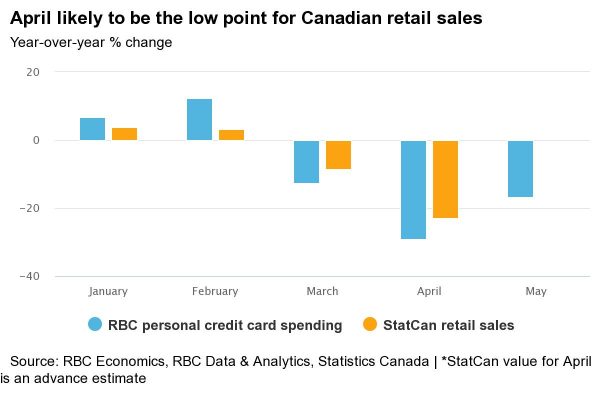 Canada’s housing market pulled itself off the mat in May, next week’s home resale data will likely show. Indeed, real estate board reports already indicate monthly sales increases ranging from 30-70%.

But those gains come on the heels of a record collapse in April. And we think May’s rebound is just the first step on a long, slow road to recovery. Watch the sales-to-new-listings ratios (already displaying some signs of softness in Western Canadian markets) to get a sense of the demand-supply balance. That should give an indication of where prices are heading.

Home construction has been hit less severely by COVID-19 containment measures, as this week’s housing starts data showed. However, ongoing weakness in the resale market is likely to keep homebuilders cautious. Expect starts to remain below last year’s levels throughout 2020.

Inflation to remain stuck below zero

Next week’s Canadian CPI report for May was also front-run by this week’s US CPI report. Canadian gasoline prices actually increased quite a bit more than in the US in May, so energy price disinflation should be less significant in Canada. But as was the case in the US, we expect other price categories will reflect a tug-of-war between lower prices for goods and services consumers are purchasing less of (travel and tourism-related and apparel) and higher prices for essentials like food. On balance, we see headline inflation remaining slightly below zero on a year-over-year basis while ex food and energy inflation should once again tick lower.

An expectation that inflation will remain persistently below the Fed’s 2% target was one reason for the central bank’s dovishness this week. We think the Bank of Canada is staring down a similarly subdued inflation outlook, and like the Fed, will need to keep interest rates close to zero and continue with QE for the foreseeable future. Deputy Governor Schembri might shed some light on the BoC’s latest thinking in his appearance next week, though the topic of his speech is yet to be announced. 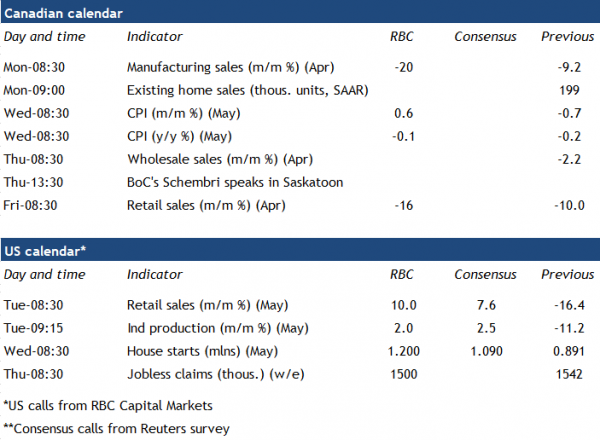