The Trump administration will once again consider tariffs on Canadian aluminum imports if Ottawa refuses to impose export restrictions on the metal, reports suggested this week.

A May 2019 agreement that put an end to earlier tariffs allowed for those 10% duties to snap back if imports “surge meaningfully beyond historic volumes.” While Canada’s aluminium trade surplus with the US had increased since tariffs were lifted, it still hasn’t fully returned to pre-tariff levels—hardly a meaningful surge relative to history.

Still, the renewed threats set the stage for another tit-for-tat trade war just as CUSMA is set to take effect on July 1. Indeed, any unwarranted imposition of US tariffs is likely to result in Canadian retaliation, as was the case when the original tariffs were put in place.

Another trade disruption with the U.S. would be bad news for Canada’s export sector, which is already under pressure from slow global growth and lower commodity prices. The country’s trade deficit more than doubled to $3.3 billion in April. We expect some improvement in May, though, with an increase in oil prices (albeit to still low levels) likely to see exports rise a bit more than imports. 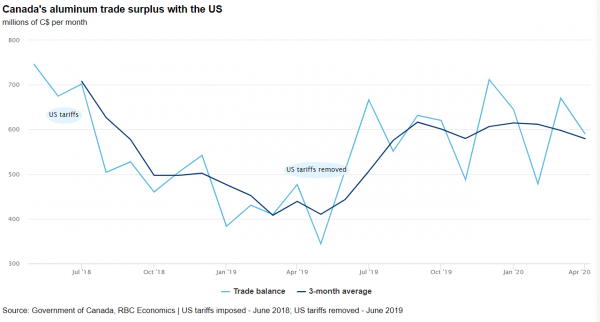 Fitch dropped Canada’s debt rating to AA+ from AAA Wednesday—the first downgrade since 2004. The two other major ratings agencies, Moody’s and S&P, still give Canada a top rating with the former having confirmed the country’s Aaa status in May and the latter in November.

Fitch cited deteriorating public finances amid the COVID-19 pandemic, with Canada’s general government deficit expected to widen to 16.1% of GDP in 2020 (reflecting a 12.8% federal shortfall and aggregate 3.3% provincial deficit). Following a sharp increase this year, government debt to GDP is expected to stabilize over the medium term, underpinning a “stable” outlook on Canada’s AA+ rating.

Fitch’s fiscal outlook is based on a 7.1% decline in Canadian GDP this year—about half way between our own -5.9% forecast and the IMF’s -8.4% projection released this week. The federal government is set to release its own projections in an Economic and Fiscal Snapshot on July 8.

Fitch’s downgrade puts a bit more of a spotlight on that update—if any was needed.

One last look at the lockdown

Next week brings one more glimpse into the economic impact of the lockdown period: Canada’s April GDP.

StatCan’s advance estimate from a month ago showed a record 11% decline in economic output in April (on top of the 7.2% drop recorded in March). Since then, data for April have come in even softer than we expected, suggesting Tuesday’s official GDP estimate could be even lower than that reading. We anticipate a 13.5% drop.

Even with a deeper-than-expected hole at the start of the quarter, we still think Q2 GDP will be on the less severe end of the 10-20% non-annualized decline the BoC has penciled in. We’ll know more when the BoC delivers its July monetary policy report. Governor Macklem, in his first major speech as head of the BoC, confirmed the central bank will provide a “central scenario” for economic growth at that point—its first full forecast update since January.

Data showing the positive effects of economic reopening in May and June—including improvement in a number of surveys this week, and an expected jump in the upcoming US payroll employment report—have taken centre stage.

Still, Macklem was relatively downbeat on Canada’s economic outlook (particularly compared with former Governor Poloz’s optimism) noting that the recovery will be long and slow, and there will likely be setbacks. 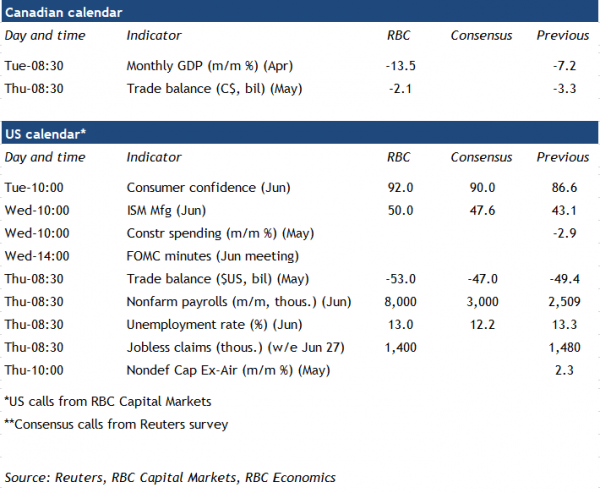