New case growth and hospitalizations appear to be accelerating primarily in the Sun Belt. Even without new lockdowns, the economic toll from acute COVID-19 outbreaks in multiple metro areas will begin to add up.

Hazards Ahead: Growth Drivers May Soon Start to Hit the Brakes

We recently wrote that a growing number of coronavirus cases in several metro areas in the Sun Belt region could inhibit economic activity in those areas and potentially set back the broader economic recovery. Since then, public health conditions in those areas appear to be getting worse, meaning a smooth climb back towards prior peak levels is beginning to look increasingly less likely. At this point, there seems to be little appetite for imposing widespread stay-at-home orders or closing down businesses. That said, re-opening efforts have been paused in Florida and Texas, and bars there are being mandated to close amid a rising number of hospitalizations in the state’s major metro areas. More precise restrictions may be on the way in hard-hit areas. But even in the absence of new regulations, the renewed threat of the coronavirus will likely lead to more cautious consumer and business behavior and weigh on the recovery nationwide.

The coronavirus is intensifying in several large metro areas which account for a large share of economic activity. Southern California is seeing a sharp acceleration in new infections. The Los Angeles and San Diego metro areas together make up about 7.0% of national GDP. Similarly, Houston (2.7%) has seen new cases spike in recent weeks. South Florida has also had a difficult time tamping down the pandemic. The Miami-Fort-Lauderdale- West Palm Beach metro comprises 1.9% of GDP. New cases are also rising sharply in Florida’s other major metro areas, especially in Tampa and Orlando and, to a lesser extent, Jacksonville. These three metros combined account for 2.1% of the nation’s GDP.

Many of the areas seeing a renewed spike in COVID-19 also punch well above their weight in terms of economic growth. Texas is a clear example. In addition to Houston, which declared a Level 1 emergency today, COVID-19 infections have accelerated in Dallas, Fort Worth, Austin and San Antonio. These metros account for 4.5% of U.S. GDP, yet were responsible for 8.6% of U.S. GDP growth between 2014 and 2018. Atlanta is another example. The long-time epicenter of the rapidly-growing Southeast accounts for 2.2% of the national GDP but has accounted for nearly twice that share (4.0%) of GDP growth the past five years. The coronavirus is also exploding in Phoenix (1.4% of GDP, 2.1% of GDP growth). Other high-growth metros seeing a marked rise in COVID-19 cases include Charlotte, Nashville and Las Vegas.

While the increase is alarming, the latest outbreaks differ from what recently occurred in New York and New Jersey. First off, the numbers are much smaller. Florida, which has two million more people than New York State, is seeing just a fraction of the cases New York did earlier this spring. The increase in positive tests in the Sun Belt is also among significantly younger persons, which helps explain why hospitalizations have not yet ramped up in line with new cases. While the spread has picked up among the young, the threat is across the entire economy and we expect the pace of re-openings to slow as households and businesses exercise more caution. 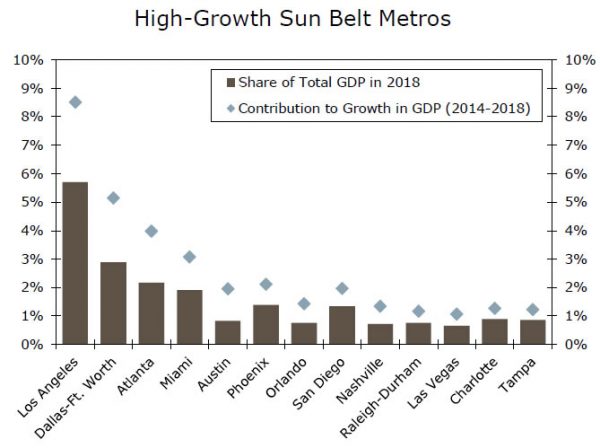 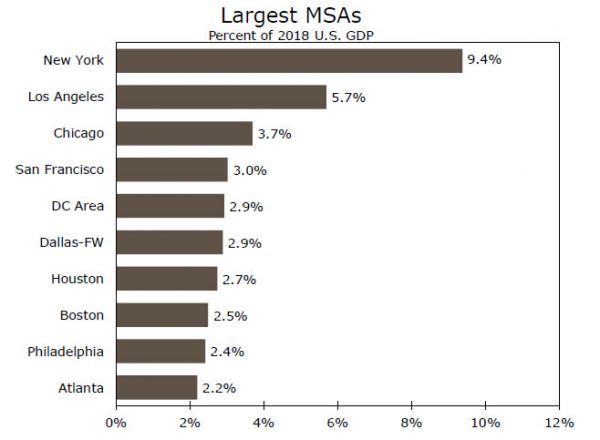 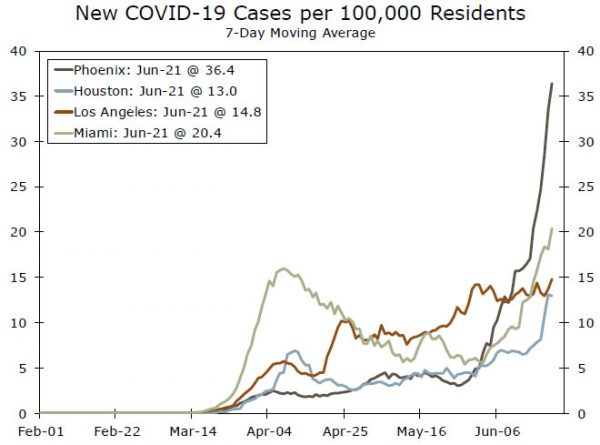