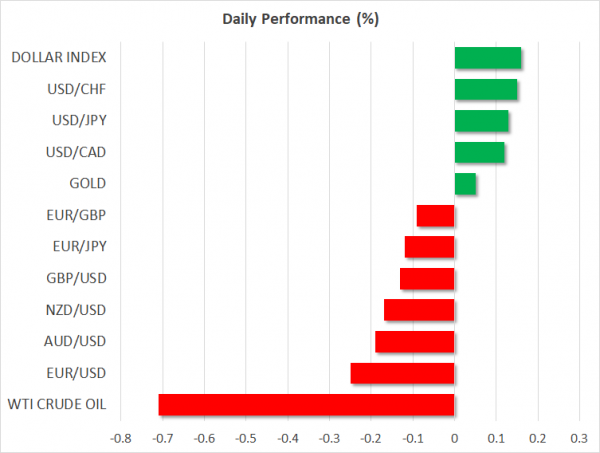 Hopes for a V-shaped recovery were bolstered after encouraging data out of the United States and China over the past 24 hours showed that the growth revival remains on track in the world’s two largest economies. US pending home sales soared by a record 44.3% between April and May, while China’s manufacturing PMI beat expectations in June.

Data from other countries was not quite so positive as industrial output slumped further in Japan during May. But nevertheless, investors continue to give more weight to the good news and downplay the negatives.

The latest developments that markets should be more worried about are the spikes in coronavirus cases in various parts of the world. US virus cases have surpassed the 2.5 million mark, while the death toll is nearing 130,000. Several states have already rolled back on plans to reopen their economies, with Arizona being the latest to shut down bars, gyms and other businesses again.

Yet, nothing seems to be able to keep Wall Street down as the Dow Jones surged by more than 2% on Monday, lifting Asian stocks this morning.

Second flare-ups are also causing alarm in Australia and the United Kingdom, which have become the latest countries to place certain cities or areas under regional lockdown, in a further sign that the reopening of economies will not be a smooth process.

The reality that the recovery will not be plain sailing is likely to become more evident in the coming weeks and until then, markets will probably remain confined to the sideways range that has been taking shape in both the FX and equities spheres during June.

But it’s not only the threat of a faltering recovery that is holding down the pause button in the risk rally. US-China tensions are brewing in the background and could escalate again after the US Commerce Department began withdrawing Hong Kong’s special status that gives it preferential treatment on trade and other areas. The move follows the passage of the controversial Hong Kong security law by China today, raising question marks about the ‘one country, two systems’ arrangement.

The renewed frictions between the two superpowers may be one reason weighing on risk sentiment today as European trading got off to a mixed start and US stock futures turned negative.

Another warning by Fed chief Jerome Powell of the “extraordinary uncertain” outlook could also be playing on investors’ minds. In prepared remarks for his hearing before House Financial Services Committee later today, Powell said ““Output and employment remain far below their pre-pandemic levels” and again called on Congress for additional fiscal support.

Gold was trading flat ahead of Powell’s appearance before Congress, while the US dollar was slightly positive after rebounding sharply overnight. The yen was also firmer, underlining some caution in the markets as investors await Thursday’s nonfarm payrolls report. But before that, there will be plenty of other data to keep an eye on, including today’s consumer confidence gauge.

No respite for the pound

The euro and the Australian were both on the backfoot on Tuesday, though the pound was a little steadier after tumbling to one-month low of $1.2249 yesterday.

Sterling came under pressure on Monday after Prime Minister Boris Johnson suggested he would be happy with a bare-minimum ‘Australia-style’ trade deal with the European Union. Apart from ongoing Brexit troubles, there are also concerns about how the UK will pay for its massive virus stimulus given the already high government and current account deficits. 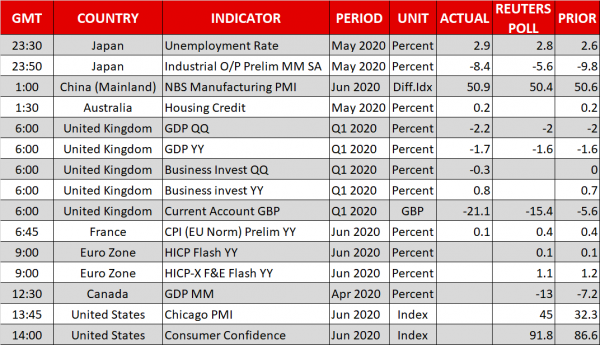