It’s a packed week in America, where Fed Chairman Powell will testify at 16:30 GMT Tuesday, ahead of the minutes of the latest FOMC meeting at 18:00 GMT Wednesday. The crucial jobs numbers for June will follow Thursday. In a nutshell, the minutes could show a Fed that’s still hesitant towards yield curve control, much like Powell seemed back at that meeting. If so, that might lift the dollar and hurt stocks a little, but in the bigger picture, how the virus situation evolves will be far more significant.

Looking for a catalyst

Global markets continue to be torn between conflicting narratives, as concerns around a flare-up in US virus cases clash with hopes that a tidal wave of stimulus will cushion the damage. This dichotomy is keeping the dollar and US stocks trapped in ‘no man’s land’, with both assets moving mostly sideways as investors wait for something big enough to tip the scales. Hence why this week might be pivotal.

Important events begin on Tuesday, when Fed chief Powell appears before Congress to update lawmakers on the economic response to the crisis. That said, we’ve heard Powell speak many times lately, so any fresh market-moving revelations are unlikely.

Wednesday brings the ISM manufacturing PMI for June (14:00 GMT), which is expected to have rebounded to 49.4 from 43.1 previously. This would be encouraging, but not much of a surprise for investors given what we’ve seen from regional manufacturing surveys.

Instead, the minutes of the Fed’s June meeting could be more impactful. Back then, Chairman Powell stressed that interest rates will remain low as far as the eye can see, even uttering the words ‘we are not even thinking about thinking about raising rates’. 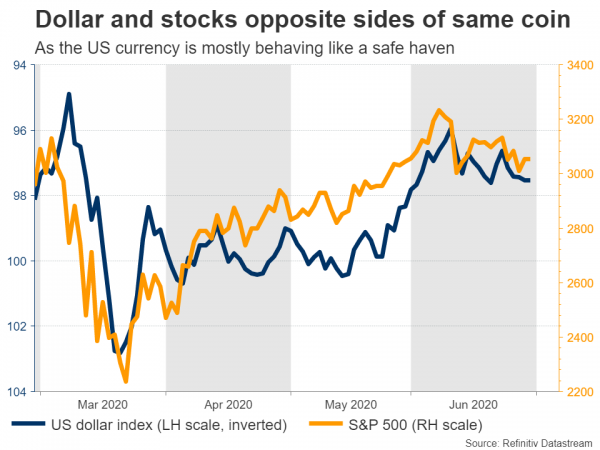 However, markets focused on a much different comment. When asked about yield curve control – a move widely speculated as the Fed’s next step – the Fed chief was reluctant to commit to anything, saying that its effectiveness ‘is an open question’. That sent stocks lower and the dollar higher, as traders priced out expectations for more stimulus.

The minutes could also strike a cautious tone towards this policy, triggering similar reactions. From the Fed officials that have discussed yield curve control so far, the consensus view seems to be that it’s a measure worth considering but only if the economy is in deep trouble, as it also carries a lot of risks. Specifically, it may not help much since yields are already very low, it could be difficult to exit from it, and if markets doubt the Fed’s commitment, the central bank might need to buy absurd amounts of bonds to keep yields steady.

To be clear, this doesn’t mean the Fed won’t implement yield curve control going forward. It very well might, but for that to happen, the situation will likely have to get much worse first, leaving policymakers no choice but to go down this path. For now, these minutes are likely to reflect some hesitation.

But the real theme is the virus

After the minutes, all eyes will turn to the jobs data for June, which is expected to show the labor market continues to heal as many workers that were temporarily laid off return to their jobs.

In the big picture though, what will really drive the dollar and stocks is how the US virus situation evolves. Texas, Florida, and Arizona have already reversed their reopening plans, shutting down bars and re-introducing social distancing measures to bring the contagion back under control. If this pattern continues or spreads to other states, it could disrupt the recovery.

This will be the biggest theme for markets going forward. Keep an eye on those daily virus numbers.

Taking a technical look at euro/dollar, if the bears manage to pierce below 1.1200, the next area to offer support may be around 1.1165.