The USD steadied against a number of its counterparts yesterday, as the US markets enter a long weekend due to 4th of July celebrations. The release of the US employment report had little impact on the dollar, despite the US economy being able to create more jobs than expected in June and the unemployment rate’s drop being wider than expected as well. Analysts tend to note that the release may have passed largely unnoticed as the markets are worrying about another spike of coronavirus cases in the US. Worries tend to intensify as during the long weekend and the celebrations the rate of transmission of the disease may accelerate even further. At the same time, it should be noted that the greenback’s safe haven qualities could be coming to the rescue once again. The US Senate unanimously passed legislation to punish banks doing business with Chinese officials who implement the new Chinese security law in Hong Kong, and the bill was sent to President Trump to sign it. It’s characteristic of the rare US bipartisan unity, how quickly the legislation passed from the House of Representatives to the Senate and from there on, to the White House. We could expect the tensions in the US-Sino relationships to escalate further which may increase safe-haven inflows for the USD, while thin trading conditions may apply today due to the US public holiday. The USD Index maintained a sideways motion between the 96.95 (S1) line and the 97.70 (R1) level. We tend to maintain our bias for the Index, as both prementioned levels managed to contain the Index’s movement over the past week, while at the same time the RSI indicator below our 4 hour chart is at the reading of 50, implying that the market has still to decide about the index’s next leg. Should the bears take over, we could see the USD Index breaking the 96.95 (S1) line, which was tested yesterday yet was able to reverse the Index’s bearish movement. Should the bearish momentum continue, the Index could aim for the 96.40 (S2) level, which contained the Index’s price action on the 23rd of June. Should the bulls take over, we could see the Index breaking the 97.70 (R1) line, which was tested on the 30th of June, and aim for the 98.30 (R2) level.

The Aussie seems poised to end the week better off against the USD, as market optimism seems to push the commodity currency slightly higher. Also, AUD found support as the domestic retail sales growth rate for May outperformed expectations and regained much of April’s lost ground. It should be noted that news coming from China were also positive for AUD, as the Caixin Services PMI indicated a record fast expansion of economic activity in June. All of the above, could boost RBA’s confidence, ahead of its interest rate decision next week, which Aussie traders could be eyeing for further clues. Please note that COVID 19 seems to remain under control in Australia albeit it should be mentioned that 300k have been reportedly set under lockdown in Melbourne, while also according to media, China has put out a flare up of Covid 19 in Beijing. We maintain our worries for the commodity currency as the tensions in the US-Sino relationships seem to be on the rise, while also the Australian-Chinese relationships have seen better days in the past. AUD/USD maintained a range bound motion between the 0.6840 (S1) support line and the 0.6940 (R1) resistance line. We expect the pair to maintain its sideways direction within the prementioned 100 pip corridor for the time being, albeit the bulls seem to have a slightly stronger presence in its price action. Should the pair’s long positions be favoured by the market, we could see AUD/USD breaking the 0.6940 (S1) resistance line and aim for the 0.7025 (R2) resistance level. Should the pair come under the selling interest of the market, we could see it breaking the 0.6840 (S1) support line and aim for the 0.6750 (S2) support level. 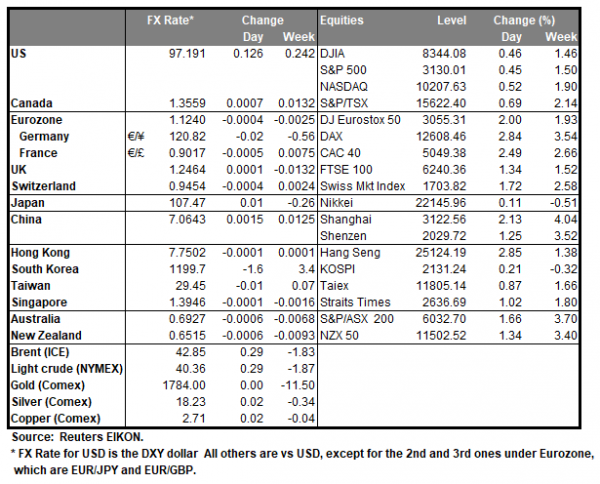 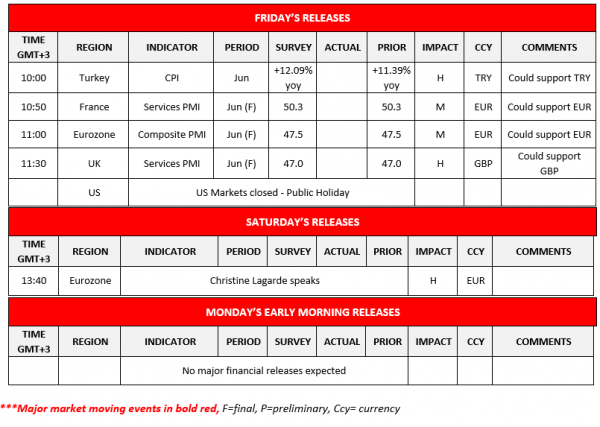