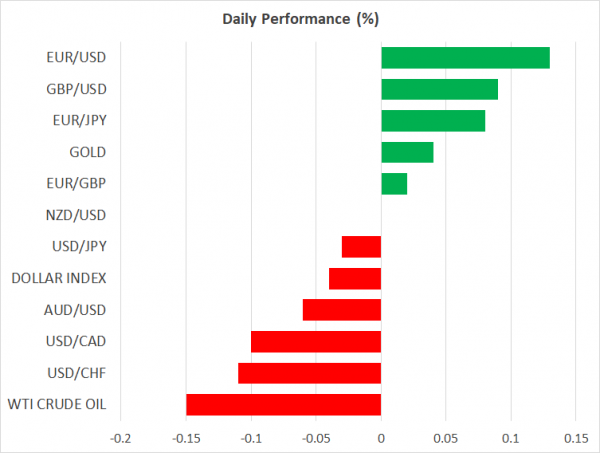 Doubts around the resilience of the economic recovery returned to haunt financial markets on Tuesday, dragging Wall Street lower and propelling the haven-like dollar higher, as investors trimmed their risk exposure ahead of what seems like a rocky few weeks. Signs are mounting that the latest reclosures in the most populous US states have put the breaks on the economy’s comeback, with weekly data released by the New York Fed yesterday pointing to a renewed dip in growth.

Fed officials recognized as much too, with regional Fed Presidents Bostic and Mester both using the same exact phrase that economic activity is “leveling off”. This sets the stage for a dire set of July economic data out of America, which will hit the markets right after a potentially disastrous earnings season and hot on the heels of a Congressional battle about more government aid.

Yet, nerves have calmed on Wednesday, with the dollar inching back lower and equity markets regaining their footing as investors look at the silver lining of all this, which is that death rates aren’t rising even though cases are. This is likely the key element keeping fear in check – alongside the tsunami of stimulus unleashed by the Fed of course – as it diminishes the likelihood of a return to full-fledged lockdown measures.

Is this because it’s mostly younger people that are getting infected, because healthcare systems are better prepared and treatments are improving, or because the virus just isn’t that deadly during the summer? Whatever the reason, the absence of a spike in fatalities is keeping investors confident that this will simply delay, not derail, the economic recovery.

Sterling comes back to life

But it was the British pound that outshined its G10 peers yesterday, drawing strengthen from a blend of ‘encouraging’ Brexit news and expectations for another round of fiscal stimulus. On the Brexit front, the chief negotiators had dinner yesterday to try and kickstart the deadlocked talks, while some reports suggested that the EU may be willing to compromise on the hot issue of fishing rights.

More importantly though, Chancellor Sunak will deliver an update on the government’s budget today, where he is expected to announce a new work placement scheme that pays the wages of young people for six months. There have also been rumors the Chancellor is considering giving UK citizens vouchers that can be redeemed at small retail stores, to jumpstart the most covid-stricken part of the economy.

Alas, while all this is highly encouraging, it’s doubtful whether it’s enough to change the pound’s broader trajectory, which will likely hinge primarily on global risk sentiment if the recent months are any guide.

The most standout move yesterday though, was gold gliding to new highs last seen in 2011, despite the US dollar being broadly stronger as well. Since gold contracts are typically denominated in dollars, a stronger greenback normally exerts downward pressure on gold prices, by making it more expensive for foreign investors to buy bullion.

This is wonderful news for the bulls, as it demonstrates that gold’s gains weren’t because of the dollar but rather despite it, signaling powerful organic demand for bullion. All told, the broader outlook for gold remains bright and new all-time highs shouldn’t be ruled out, amid a trifecta of uncertainty, exploding government deficits, and expectations that rates will stay low ‘forever’.