The 953k jump in employment in June was stronger than expected – but still not altogether surprising given unprecedented swings in labour markets in recent months. The June increase built on a 290k May gain, but the combined 2-month rise still only retraced about 40% of losses over March and April. The level of employment was still down 1.8 million from February in June. As-expected, further easing in virus containment measures left a more even split on job gains across goods and service-producing sectors (with increases of 159k and 794k, respectively in June). Total hours worked increased 10%, larger than the 6% increase in employment.

The unemployment rate fell sharply to 12.3% – clearly still an exceptionally high rate by historical comparison but better than the 13.7% May rate. That still undercounts true labour market underutilization with a large share of those on permanent layoff still not looking for work. But that gap has begun to narrow. There were about 580k more people on permanent layoff but not looking for work than a year ago in June – still sharply elevated, but less than half of the 1.4 million in April. The labour force participation rate rebounded to 63.8%.

The jobs numbers for June join a growing number of economic indicators that have been less-bad than feared early in the economic recovery. Labour markets are still in an exceptionally weak spot by any historical comparison, and there are still significant questions about the potential pace and magnitude of the economic recovery that can be sustained without re-accelerating virus spread. And labour markets are still unlikely to have fully recovered before the expiry of current unprecedented household income supports. We continue to expect economic activity overall will remain well below pre-shock levels by the end of the year, but the near-term initial bounce-back in activity is looking a bit sharper-than-expected. 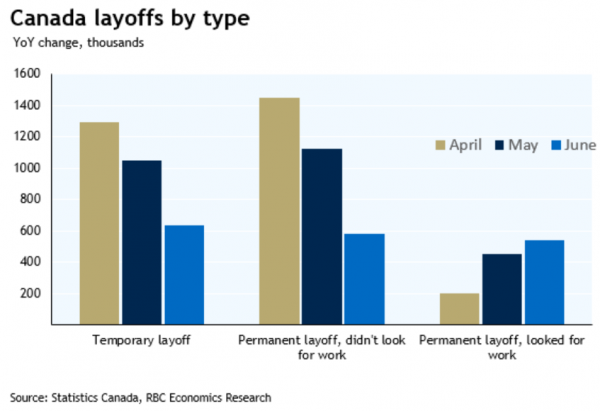 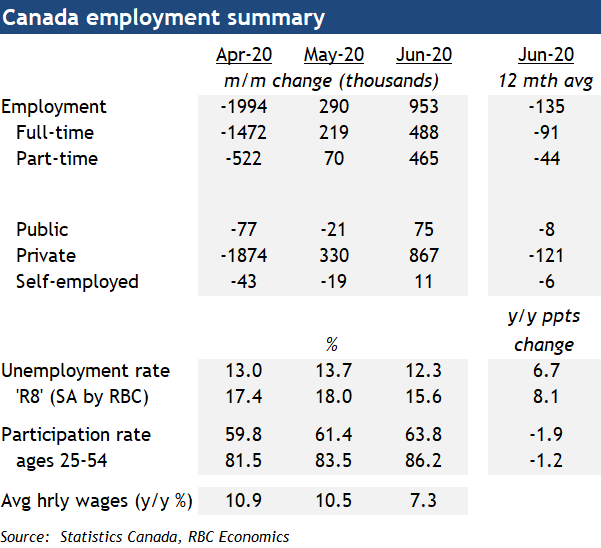