Employment data helped to extend losses for the Kiwi from recent highs and we ponder if it, along with other commodity currencies, could be the canary in the coal mine for a rebound in the USD.

Dairy prices contracted by -1.6% overnight, their fastest rate of contraction since March and the first data set over the next 23 hrs which were to weigh on the flying Kiwi. The employment report was received with a glum tone, despite not being that bad overall, although it could also be argued the NZ Dollar was due for a correction of some sort anyway.

Unemployment softened to 4.8% as forecast, down 1 percentage point from 4.9%. This now takes it to its lowest point since December quarter 2018. The employment change fell below expectations of 0.7% to contract -0.2%, its first negative quarterly print since September 2015. This has now dragged the annual employment increase to 3.1%, its lowest level since March ’16. Yet it was the participation rate which likely caused the biggest stir as it has moved down from a record high of 76 to drop 6 percentage points. By historical standards this is an extreme fall as it has only been matched or beaten three quarters since the data’s inception. 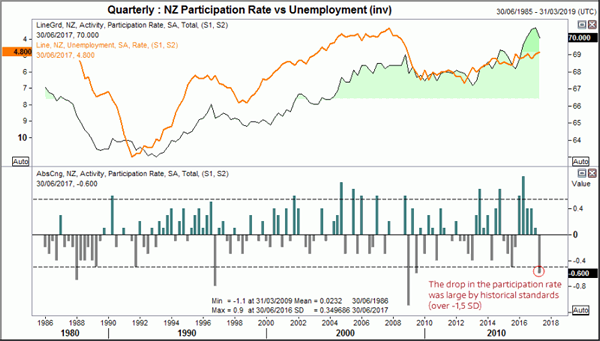 At this stage, the employment reads are of no great concern to RBNZ, as these remains to be low inflation and the high New Zealand Dollar. Whilst there has been a softening of the NZD, it is too early to expect RBNZ to celebrate their trade weighted index remains about 6% higher than they’d like it. Still, it is possible that some NZD crosses are technically overbought, and we see potential for AUDNZD to strengthen over the near-term as price action on is constructively bullish. 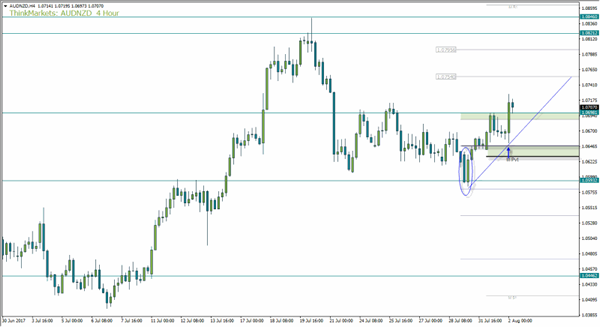 AUDNZD is a currency pair which sometimes requires patience as there can be lots of overlaps between candles. This in turn requires patience not to move the stop too quickly but, when a trend is caught, it can be sudden and fast moving.

The bullish piercing pattern rejected the weekly S1 and has since broken through and respected the weekly pivot as support. The fact we now have price above the weekly and monthly pivot and the zones has since provided a bullish engulfing candle suggests bullish momentum is beginning to build. The weekly R1 and 1.070 high may now provide a zone of support, although we remain bullish if we remain above the blue rising support which allows for a sizable retracement within the prior H4 candle. 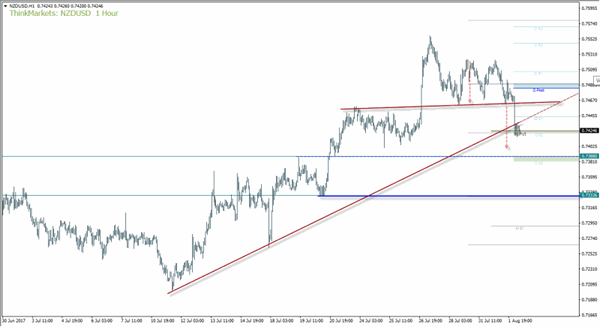 Price action on NZDUSD has also taken a dramatic twist and we wonder if it could be the canary in the coal-mine for a USD rebound from multi-year lows. The drop following today’s employment data confirmed a double top which projects an approximate target just above 0.7388 support. Yet we also broke beneath a rising support line and today’s session has so far remained beneath it. It we are to extend the decline beyond today’s low whilst remaining beneath the rising resistant line then we expect losses to be direct and there is hope for a run towards 0.7333. If we are to rebound from the pivot and respect the broken neckline then we can consider a bearish swing trade and remove the broken trendline from our analysis.