Forward Guidance: Growth in Employment to Continue in July, at a Slower Pace

Canadian labour markets probably continued to look a little better in July. Though the 400k increase in employment we expect would still leave the job count down about 1.4 million compared to February levels, even after the 1.2 million jobs added over May and June. Labour force participation likely also continued to rebound but we still expect job growth to be enough to push the unemployment rate down to (a still elevated) 11% from 12.3% in June.

Statistics Canada’s preliminary estimate is that Canadian GDP declined an unprecedented 40% at an annualized rate in the second quarter. But things looked less bad towards the end of the quarter with output up in both May and June – and our own tracking suggesting if anything some upside risk to the 5% increase in GDP the statistics agency pencilled in for June. Early July economic data has continued to broadly look a little better as well. Consumer confidence is still subdued but ticked higher in July, and early indicators from card-spending data suggest that household spending has largely held onto earlier gains to-date.

Next week’s June international trade report should show both exports and imports picking up – led by a bounce-back in auto trade already flagged in early industry production numbers and preliminary US international trade numbers. We expect the net balance deteriorated somewhat in June but the improvement in trade flows would still be a positive sign for the heavily-trade-reliant industrial sector.

Still, employment in services industries like accommodation and food services as well as retail, which saw some of the biggest declines in jobs over March and April, continue to lag in the recovery. The level of employment in accommodation and food services alone was still 400k below February levels in June. Those jobs will be slow to return as long as households are sticking closer to home. Much of the early recovery has been driven by an easing in virus containment measures, and further marginal gains will be harder to come by.

US economy not expected to revert to Q2 lows, but plateauing in July

Things have been less upbeat south of the border where resurgence in virus cases and renewed containment measures risk stalling the economic recovery. Virus spread has looked a little less-bad in recent days in hotspots like Florida and Texas but is still elevated. US consumer confidence dipped lower in July after partially rebounding into June, and initial jobless claims have increased the last two weeks after declining for 15 weeks straight.

We still expect the US economy to grow from exceptionally low Q2 levels in Q3, but at a slower pace than would normally have been expected based on momentum in economic data through June alone. We expect employment rose another 2.25 million in July, but that would still leave the job count down more than 12 million from February.

The Federal Reserve also acknowledged a plateauing in the recovery in their policy announcement the week past and mentioned some softening in higher frequency data, such as credit card and debit card purchases. The Fed reiterated its stance to keep policy accommodative and rates low until “it is confident that the economy has weathered recent events and is on track to achieve its maximum employment and price stability goals.”

Much of the resilience in household spending both in the US and abroad has also been thanks to unprecedented government income support measures for those losing work. By our count, payments from the CERB program alone in Canada were about twice total wage losses through the end of May according to data released over the last week. And US disposable incomes surged 9.2% in Q2 despite unprecedented job losses.

The Canadian CERB program has already been extended, yet the program is still set to expire by the end of September for early applicants – and we expect labour markets will still be significantly weak from a historical perspective at that point. In the United States, efforts to get another round of stimulus spending through congress are ongoing, even as exceptional income supports are set to expire. The risk of labour market weakness outlasting government support measures is adding downside risk to household finances and spending later in the year, and is becoming more and more relevant. Ultimately, we expect the growth in demand to slow, leaving considerably slack in the economy and activity well below year-ago levels for the remainder of 2020. 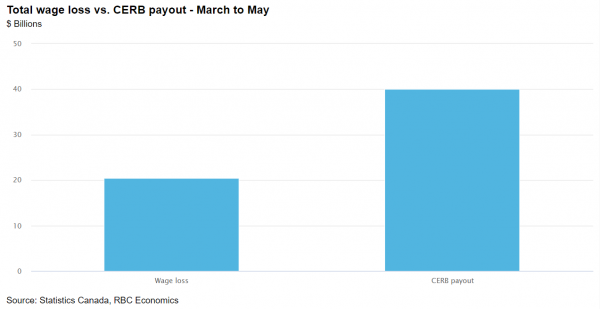 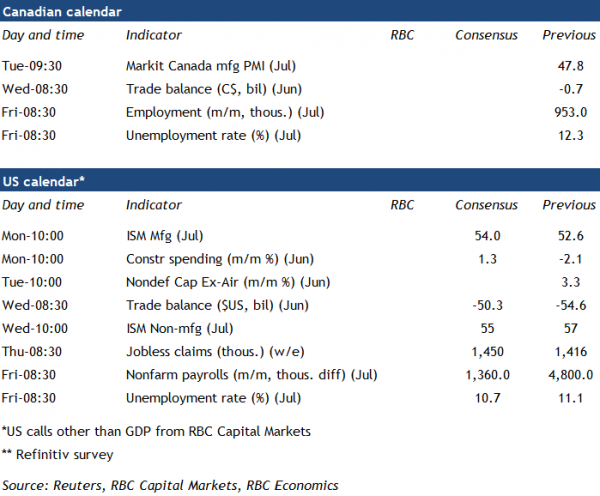