New Zealand’s jobless rate is expected to have surged to a 7-year high in the June quarter as employers struggle to maintain staff numbers in the face of the global pandemic. The data, due on Wednesday (Tuesday, 22:45 GMT), might not pose an obvious threat to the local dollar’s 4-month-long uptrend versus its US rival as New Zealand has so far avoided being hit by a second wave of COVID-19 infections. However, the rocky recovery in the country’s main trading partners and the government’s closed-borders policy could create an overhang on the labour market.

Job losses expected to have mounted in Q2

After ticking up to 4.2% in the first quarter, the unemployment rate is projected to have shot even higher in Q2, to 5.8%, which would make it the highest since Q3 2013. The number of jobs is expected to have declined by 2%, while the labour force participation rate likely fell to 69.8% from 70.4% before. The deterioration in the jobs market is anticipated to have weighed on wages, with the labour cost index forecast to have risen by 1.9% annually in the second quarter, moderating from the prior 2.4%. 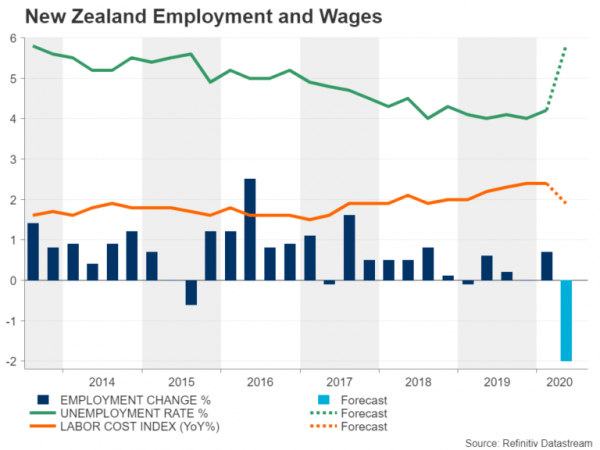 Although such a jump in unemployment would spell the end of the steady progress made since the end of 2012 in bringing the rate down, the increase is not as bad as some of the initial gloomier predictions or as in some other countries such as the United States. The question that needs to be asked now, though, is whether the jobless rate has peaked, and if so, how quickly will it fall back down?

It is thought that just over 200,000 people were receiving out-of-work benefits at the beginning of July. This is fewer than the government’s predictions of 232,000 claimants by the end of June. However, the figure does not include the 372,000 jobs that are being supported by the government’s Wage Subsidy Scheme, which has been extended by a further eight weeks as the initial 3-month period draws to a close.

With New Zealand’s large tourism industry still being crippled by the border closures, it’s highly doubtful whether many of the jobs in the sector will be restored once the government programme ends. Elsewhere in the economy, the situation does not appear so bad. The housing market, for example, has benefited from overseas New Zealanders returning home during the pandemic as the country is deemed a safer place.

Unlike its bigger neighbour, Australia, New Zealand has steered clear of a second flare-up in new virus cases. But how long will the government be able to keep its borders shut to keep the country safe at the expense of the economy? As things stand, Prime Minister Jacinda Ardern isn’t about to sacrifice public health over jobs. But should the recovery in other countries begin to derail, putting even more pressure on New Zealand’s trade-dependent economy, the government may be forced to relax some of its travel restrictions.

In the meantime, the Reserve Bank of New Zealand will be keeping a very close eye on the jobs numbers, particularly as employment is one of the central bank’s two mandates. Any indications from the data that the jobless rate has yet to peak is likely to inflict downward pressure on the New Zealand dollar, which is currently trading near 7-month highs against the greenback.

Does the kiwi rally have more legs?

A retreat in kiwi/dollar from disappointing numbers could see the 50-day moving average forming a support area around the 78.6% Fibonacci retracement of the January-March downtrend at 0.6480. Sharper losses would bring the 200-day moving average into scope around 0.6358, while lower down, the 50% Fibonacci of 0.6112 could become a major target for the bears.

However, should investors continue to remain optimistic about the outlook, kiwi/dollar could soon surpass the December 2019 top of 0.6755, before aiming for the 123.6% Fibonacci extension of 0.7059.

As a note of caution, traders should be wary about overextending the kiwi’s rally given the RBNZ’s dovish inclinations. Even if the jobs data were to suggest that the worst is over, the prospect of a slow recovery would keep policymakers from dropping their easing bias anytime soon, not to mention their discomfort from a fast-appreciating currency.