Payroll employment added another 1.4 million jobs in August, right on consensus expectations but smaller than the 1.8 million rise in July. Overall employment has now risen 10.6 million May through August, retracing almost 50% of the job losses over March and April. One fourth of the gain in August can be attributed to an increase in government employment, boosted by temporary census hiring. 12 out of the 13 private industries added jobs, with retail trade again leading the gain. Professional & business services and leisure & hospitality also contributed well to the increase. Mining and logging continued to shed jobs for the fifth consecutive month since March, and the weakness there could persist with activity in oil & gas extraction still very soft.

The unemployment rate dipped sharply lower to 8.4% in August, down significantly from its peak in April but again with much of the improvement coming from a decline in temporary layoffs. The number of permanent job losers in the labour force remained stubbornly high, growing another half a million in August. The labour force participation rate rose again in August after ticking unexpectedly lower in July. And the gap between broader measures of labour market under-utilization and the official measures continued to narrow, as the number of involuntary part-time workers dropped by almost a million. Indeed, the broader U6 rate (‘official’ unemployment rate plus discouraged and involuntary part-time workers among others) fell to 14.2% in August from a peak of 22.8% in April. That was larger than the fall in the official unemployment rate (U3), pointing to meaningful improvement in under-utilization.

Still, the economy has far from recovered. Our own forecast has GDP bouncing back to 4.2% below year-ago levels on average in Q3, and the recovery in employment has been slower. The jobs count was still down 7% from year-ago in August and hours worked was still down 8% relative to February. Initial and continuing claims continue to decline, but from still extremely elevated levels. To-date, much of the out-performance in the economy-wide growth data can be credited to massive government income transfers, which have helped to put a floor under household incomes even as job losses mounted. With the exceptional support tapering off in the US (as federal payments to top up unemployment insurance checks expired), and labour markets still very soft, we can expect the pace of spending growth and economic recovery to slow in coming months. 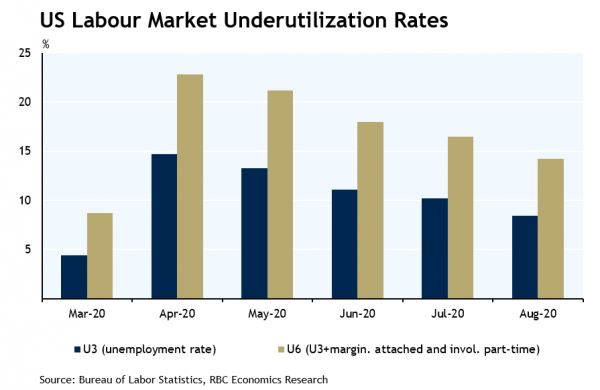 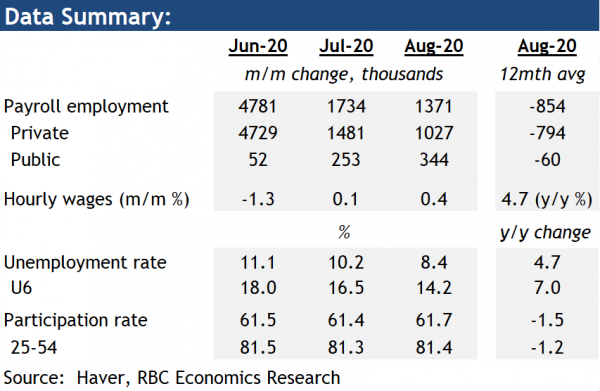