The European Central Bank will conclude its two-day policy meeting on Thursday, with the announcement due at 11:45 GMT, to be followed by President Lagarde’s press conference at 12:30 GMT. Up until recently, the September meeting was seen as nothing more than an update by the Bank on its pandemic response. But the euro’s flirtation with $1.20 and the Federal Reserve’s adoption of a looser inflation target, not to mention signs that the Eurozone recovery may be stalling, have likely upset policymakers’ plans for a quiet summer. Hence, while no policy action is expected by the ECB this week, all eyes will be on what Lagarde has to say about the recent developments.

Fresh headaches for the ECB

It wasn’t so long ago that it seemed like ECB policymakers would be able to put their feet up, at least until the rest of the year, and let the combined monetary and fiscal stimulus of over €2.2 trillion do its work in restoring Europe’s economic fortunes. But as always, the bliss never lasts long, and the ECB now has several potential headaches to worry about. 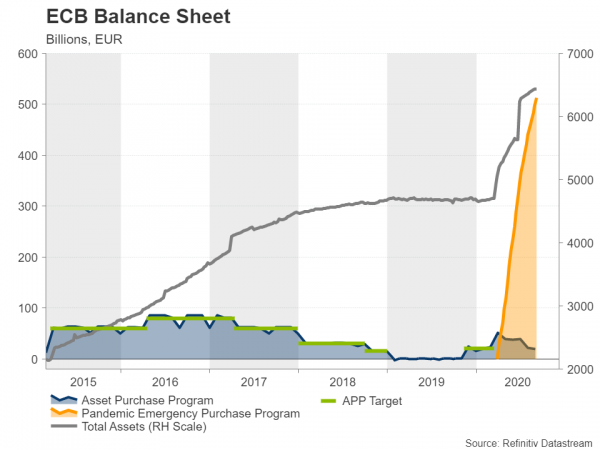 For a start, the rapid appreciation of the euro, which last week briefly topped the $1.20 level for the first time in two years, threatens to derail the recovery of European exports that the region is so dependent on for generating growth. But as far as the ECB is concerned, a more immediate problem is the deflationary impact of a stronger exchange rate. Headline inflation in the euro area unexpectedly turned negative in August, dropping to a four-year low of -0.2% y/y.

Although a short-term negative shock to prices is to be expected from the pandemic’s economic fallout, a rising currency together with a slow recovery could create a dangerous deflationary cocktail – something that policymakers will want to avoid at all cost. 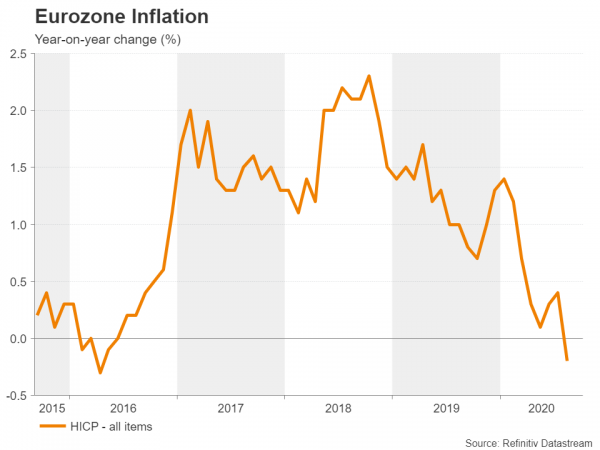 Did the Fed just boost the euro?

Complicating things for the ECB is the Fed’s historic move to focus on average inflation over time rather than having a rigid target of 2%. Why does this matter for the ECB? Because lower rates for longer in the United States would pressure yield differentials in favour of the Eurozone, adding to the euro’s upside at a time when the single currency is already firmly on a positive slope.

It’s possible of course that the Fed’s more ‘relaxed’ approach to hitting its inflation goal may push the ECB to also follow a similarly flexible policy. But the ECB’s own review of its monetary policy strategy won’t be completed until mid-2021 and policymakers will probably want to rein in the euro’s advance before it goes too far.

The big question is, how annoyed are ECB policymakers about the rallying euro at this point to consider making a verbal intervention? Reacting too strongly too soon may weaken the effectiveness of future verbal threats should the euro continue rising and so it’s quite likely Lagarde will simply express some displeasure at the currency’s gains when she remotely addresses reporters on Thursday.

A greater challenge for Lagarde will be to strike the right balance when it comes to explaining the central bank’s updated economic projections. Survey data for August suggest Europe’s impressive rebound may have hit a stumbling block and this may lead to Lagarde warning of increased uncertainty regarding the outlook, which is being heightened by the alarming surge in new coronavirus cases in countries such as Spain and France.

Sounding too pessimistic risks triggering a market panic, while not showing enough concern about a possible slowing in the recovery could wrongly send the message that the ECB is in no hurry to beef up its stimulus programme should the situation deteriorate.

A relatively upbeat outlook could lift the euro back above the $1.19 handle, taking it within closer range of the 28-month peak of $1.2011 touched on September 1. However, unexpectedly gloomy remarks by Lagarde could deepen the euro’s latest pullback, turning attention to the recently congested zone of $1.1780. A slip below this area could open the way for the 50-day moving average around $1.1655. Any downside would be exacerbated if Lagarde was to back her dovish stance by outright easing signals.

It’s worth bearing in mind, though, that even if the ECB fails to stem the euro’s appreciation, the rally may already be on its last legs and the bullish forecasts may be overdone. According to the most recent indicators, the gap between the Eurozone’s economic outperformance over the US is closing and if that trend persists, it shouldn’t be long before the euro’s ascent begins to flatten out.