The Fed made a late-summer splash at Jackson Hole with some notable changes to its longer run monetary policy goals that reinforced a low for long message. Those updated goals were reflected in today’s policy statement that said the fed funds rate is expected to be held at its current level until the economy has reached maximum employment and inflation has risen to 2% and is on track to “moderately exceed 2% for some time.” With inflation only expected to reach 2% in late-2023, the majority of committee members (13 of 17) don’t expect to raise rates until 2024 at the earliest. No additional guidance on the pace of asset purchases was provided with QE continuing at “at least the current pace” (roughly $120 billion of combined Treasuries and MBS purchases per month) “over the coming months.” Asset purchases combined with strong forward guidance on the path of the fed funds rate are intended to keep interest rates low further out the yield curve.

The statement noted the Fed will adjust monetary policy “as appropriate if risks emerge that could impede the attainment of the Committee’s goals.” While the early recovery has been stronger than expected, Chair Powell noted the path ahead “remains highly uncertain” and will depend in part on future government policy actions. Powell acknowledged that lack of further fiscal support would be a downside risk to the committee’s economic projections. Those projections were revised higher with GDP on a Q4/Q4 basis expected to be down 3.7% in 2020, much less than the 6.5% decline projected back in July. While the rebound in 2021 was shaded slightly, activity is now seen returning to late-2019 levels by the end of next year (previously seen falling about 2% short). Above-trend growth in 2022-23 is expected to push the unemployment rate back down to 4% at the end of 2023, compared with 7.6% projected at the end of this year (was 9.3% in July’s projections).

Our own forecasts aren’t substantially different from the Fed’s updated projections. We see US GDP declining roughly 4% this year and rising 4% next year (both on a Q4/Q4 basis). We also think the unemployment rate will be back below 6% by the end of next year but still-significant slack in the economy will keep a lid on inflation. With the Fed committed to an extended period of low policy rates (particularly in light of its updated policy goals) and asset purchases reinforcing that guidance, we think Treasury yields will remain low (moving only slightly higher) throughout our forecast horizon. 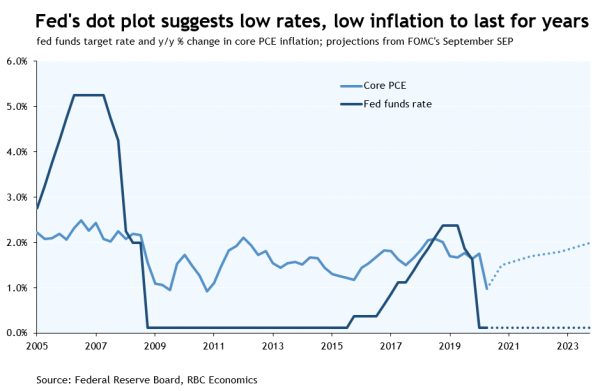