Australia Employment Continues to Power On

The shutdown in Victoria did hit that state with employment falling –42.4k and the unemployment rate lifting 0.3pt to 7.1%. Victorian employment is now just 9.5k/0.3% higher than the May low. The recovery in Victoria peaked at 51.9k/1.6% in July from May.

The Weekly Payrolls data suggested that the recovery in NSW was running out of steam in August but this did not show up in the Labour Force. In August, NSW employment lifted a further 51.5k following on from the 56.2k in July and 80.3k in June. In the month the unemployment rate fell 0.5ppt to 6.7%. This state’s labour market continued to power on even if the Victorian shutdowns were clouding the economic environment.

This update has made it much more difficult for the RBA to hit its forecast peak in unemployment of 10% by end 2020. To achieve this employment would have to collapse between 400k to 500k by December. This would be a very extreme situation and suggests an aggressive unwinding of support packages such as JobKeeper, which while it has been modified it has also been extended to March 2021.

Westpac is retaining our current peak in unemployment this year of 7.8% in December. Without a doubt, the recovery in the rest of the country has been more robust (so far) than we thought while the hit to the Victorian labour market has not as bad as expected. However, with the rolling off or adjustment of many of support packages (in particular JobKeeper) between now and the end of the year there is meaningful risk to employment. 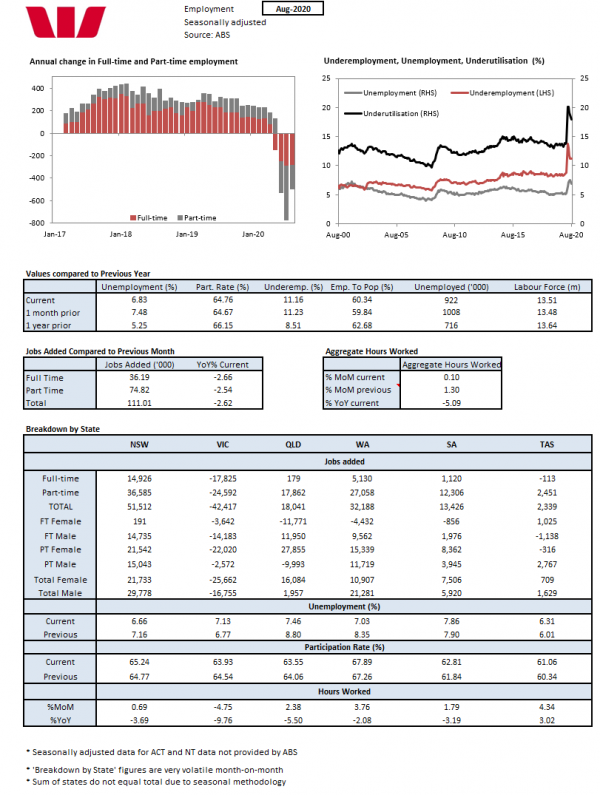