The 0.6% increase in retail sales overall was very close to Statistics Canada’s 0.7% preliminary estimate a month ago, and marked a dramatic slowing after 20%+ increases in each of the two prior months. Sales at clothing stores continued to bounce back with an 11% jump in July, but were still almost 13% below year-ago levels. Gasoline sales also continued to increase with households venturing further from home as COVID-19 restrictions eased. Offset came from lower sales on at-home entertainment (eg. sporting goods and hobbies) and at building material stores but those spending categories were all still well-above pre-shock levels in July. Just sales of motor vehicles and parts, gasoline, and clothing were still lagging behind February levels by July.

Still, the pace of improvement has clearly slowed. Much of the initial bounce-back in sales was tied to simply allowing businesses to re-open, but that process is now largely complete. In July, just 3% of businesses reported closures, and for an average of just 1 day. The preliminary estimate of August sales was up 1.1%, not a dramatic improvement on the July numbers, although that despite what was probably softer-than-usual back-to-school spending with more students returning to ‘virtual’ classrooms in September.

Broader household spending trends still look relatively solid at this point in the economic recovery – particularly home resales which have accelerated dramatically over the summer. And spending on services, which lagged behind the initial rebound in retail purchases, has also continued to gradually recover along with activity in the industrial sector. Still, go-forward gains will be harder to come-by, and the pickup in virus spread across Canada’s more populous provinces in recent weeks is yet another reminder that there will not be a full return to ‘normal’ as long as the virus threat remains. We continue to expect this initial rapid-looking bounce-back in economic activity will ultimately fade into a slower pace of growth with the economy still expected to be running well-below capacity, and unemployment still elevated, into next year. 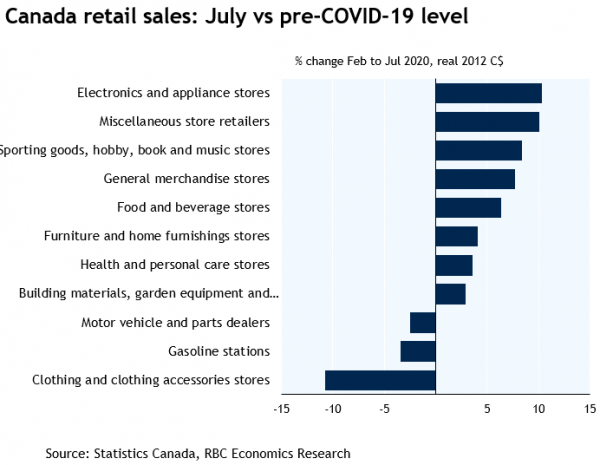 BoC “Calibrates” QE But Stays the Course with Stimulus

BoC stands pat, no rate hike until into 2023

Bank of Canada Decision: Waiting It Out