We expect the July Canadian GDP report to flag a slowing in the pace of the recovery. The release is likely to confirm Statistics Canada’s preliminary estimate that GDP rose 3% in July –a sizeable gain but smaller than the June (6.5%) and May (4.8%) increases. Even with the economy growing for a third consecutive month, July’s increase will leave activity running about 6% below February levels. A slowing in the pace of growth after an initial recovery surge has been long-expected. Household spending on goods had already recovered (surprisingly quickly) to above year-ago levels in June, leaving less room for additional marginal gains in the near-term. Growth in the industrial sector also slowed as the summer wore on – manufacturing hours worked edged up another 2% in August, but sales in the sector fell 2% after a 7% increase in July.

Indeed, the recovery has been (predictably) uneven with some industries, like retail, vastly outpacing the others. Housing markets have been surging over the summer as well. But investment in the oil & gas sector is still exceptionally soft. And activity in industries tied to tourism, like entertainment and accommodation & food services, remains very weak and will not fully recover while the virus risk remains. The strength of the early bounce-back in activity during the reopening phase put GDP on track to post a 40% (annualized) rebound in Q3. That pace of growth will be slower going forward – and still with downside risks should the latest bout of virus spread escalate to the point of prompting another round of more stringent containment measures. 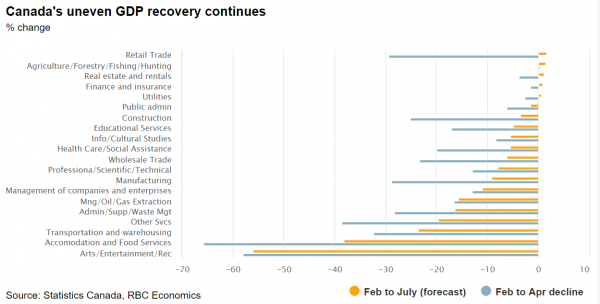 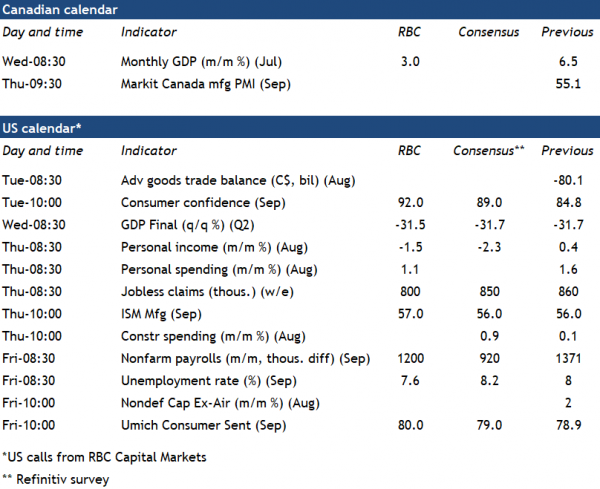