USD/CAD is slightly lower in the Friday session. In North American trade, the pair is trading at 1.3206, down 0.15% on the day. The pair is poised to post weekly gains for the first time since mid-September.

Consumers were in a spending mood in September, as retail sales were much stronger than expected. The headline figure climbed 1.9%, up from 0.6%. This easily beat the estimate of 0.7%. Core retail sales rose 1.6%, versus 0.4% expected. In August, the indicator came in at 0.7%. The news was less positive north of the border, as Canada Manufacturing Sales came in at -2.0%, its first decline in four months. Despite the disappointing manufacturing data, the Canadian dollar is showing limited movement on Friday, and we can expect this trend to continue throughout the day.

Labour pains in Canada, US

The markets continue to keep a close eye on job numbers on both sides of the border, with constant concerns that the economic recovery could lose steam at any time. Canada posted strong employment numbers last week, as the economy created 378.2 thousand jobs in September. However, the September ADP nonfarm payrolls report went in the opposite direction, with a reading of -240.8 thousand. The soft release pushed the Canadian dollar lower on Thursday.

In the US, it was also a disappointing day on the employment front. Initial unemployment claims jumped to 898 thousand, up from 840 thousand. This was well above the estimate of 810 thousand and the highest weekly level since August. 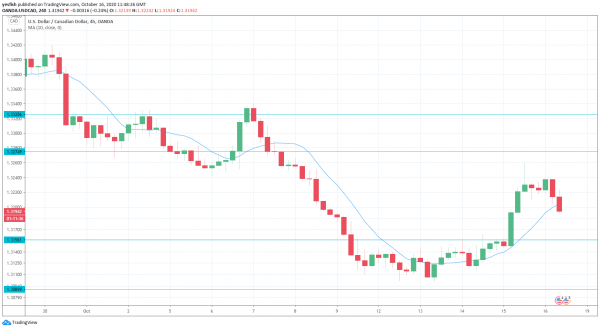