GBP/USD has posted sharp gains in the Wednesday session. In the European session, the pair is trading at 1.3165, up 1.6% on the day. Barring a significant correction during the North American session, the pound is poised for its strongest 1-day gain since March.

September inflation in the UK was stronger than expected. CPI improved to 0.5%, up sharply from 0.2% beforehand. As well, the reading edged above the forecast of 0.4%. Core CPI, which excludes the most volatile items in the headline reading, improved to 1.3%, matching the estimate. This was up strongly from the August reading of 0.9%. There was more good news from the Producer Price Index Input, which rebounded with a 1.1% gain, crushing the estimate of -0.9%. In August, the index declined by 0.4%.

The next text for the pound comes on Friday, with the release of British Retail Sales and manufacturing and services PMIs. Retail sales is projected to fall to zero, down from 0.8%. The PMIs are also expected to soften, and investors could give the pound a thumbs-down if these numbers are soft.

The Brexit appeared to have been stalled as recently as late last week, when British Prime Minister Johnson said that the talks were over unless the EU showed some flexibility. Rather than point fingers back at Johnson and blame him for the impasse, the Europeans appeared to have displayed some positive movement. On Wednesday, EU Council head Michel Bernier acknowledged some of London’s gripes in a speech in the European Parliament. Bernier said that sovereignty was a “legitimate concern” for the UK and that the EU would have to make compromises as well in order to get a deal signed.

Cynics may dismiss Bernier’s comments as little more than lip service, but it could also signify a sincere attempt by Brussels to take a small step forward; if Johnson can do the same, the newfound goodwill between the sides could lead to an agreement, even if only a “slim deal” which would have to be filled in later down the road. Any signs of tangible progress in the talks could send the pound to higher ground. 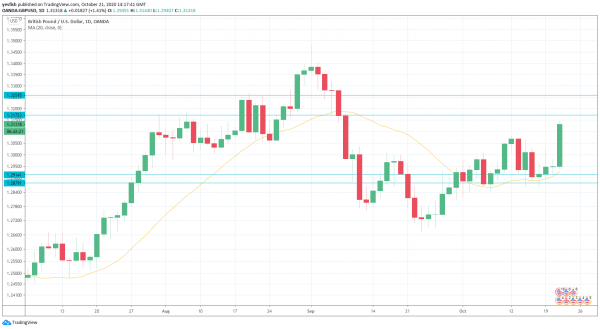